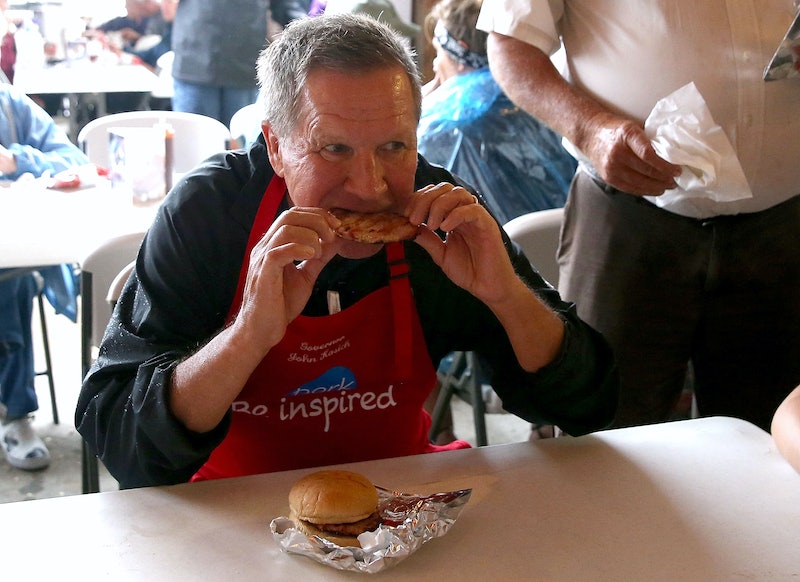 Donald Trump does not approve of the way Gov. John Kasich eats in public, a point he emphasized during a rally in Rhode Island on Monday. The Hill reported Trump's harsh comments on the governor's apparently sickening habit of ingesting food in front of other people in a way that seems to indicate enjoyment. "Did you see him? He has a news conference, all the time when he's eating. I have never seen a human being eat in such a disgusting fashion," Trump said to his crowd. Trump is so put off by Kasich's fork game that he thinks it's enough to keep the Ohio governor out of the White House. "Do you want that for your president? I don't think so."

It's hard to imagine anyone ever turning to Trump for etiquette advice, but he gave some anyway. "I'm always telling my young son Barron, always with my kids, all of them, I say, 'Children, small, little bites.'" (In case you forgot, like I did, this man is a father.)

I am angry about Trump's attempt to shame Kasich for the way he eats. To explain why, I'll start by admitting to one of the things that brings me great joy in the world: pictures of John Kasich eating things. Here's an example — look at that face!

This is not some random quirk that I can't explain. I'm one of the lucky souls who experiences anxiety when eating in public, which is one of the more common forms of social anxiety. It's not so bad that I never go to restaurants or force myself to go hungry when I'm out of the house. I can eat in public, but it's difficult, and sometimes I can't really enjoy what I'm eating.

When I see someone eating in front of other people not only with apparent comfort, but with enthusiasm, it gives me hope. I'm happy for that person, and I aspire to be able to do what he or she is doing. Kasich is under constant scrutiny from other candidates and from the media. He's constantly staring down camera lenses on all sides, subjected to the uninterrupted gaze of the public eye. Seeing someone in that position take a big, sloppy bite of pizza and relish in it is freaking awesome to me.

Get in there, Johnny!

People shouldn't be ashamed of eating. I can't claim to have a grasp on the psychological underpinnings of that shame, but I imagine body image and beauty standards are at least partly responsible for the fact that, for me and many others, food and the act of eating it seem somehow taboo. For Trump to take time during his rally to prescribe rules around eating that would make the affair more dainty and for him to personally insult a man for unabashedly getting his nosh on in public reinforces the taboo that makes it hard for me to lift a damn fork to my face in public. And that's disgusting.

The Kasich campaign's response to Trump's remarks was gold:

Trump is gonna hate, and Kasich's gonna eat. And I'm gonna look at all the photos of him doing so. Thanks for the inspiration, governor.