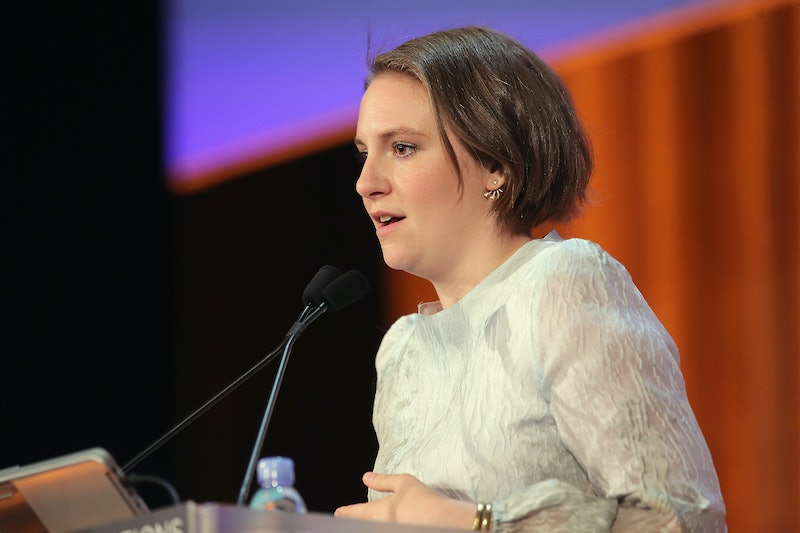 Lena Dunham — actor, writer, and creator of Girls — has made it perfectly clear that she wants to see Hillary Clinton in the White House in 2017. But what if that doesn't happen? On Monday, Dunham was honored with a Matrix Award from New York Women in Communications for her success in Hollywood at such a young age, and the 2016 election inevitably came up while she was on stage at the Waldorf Astoria. If Donald Trump becomes president, Dunham plans to take some pretty drastic actions — going so far as moving to Canada.

Before Dunham and seven other female leaders in the communications industry were honored with the prestigious award, emcee Andy Cohen asked them each three revealing questions about their lives, careers, and relationships. After asking Dunham what she would do if she woke up as a man (she responded, without pause, that she would kill herself) and the least-fun thing about her boyfriend Jack Antonoff, Cohen inquired what the celeb would do if she woke up to find that Donald Trump was president.

"I know everyone's always idly threatening this, but I'd be 100 percent moving to Canada," Dunham said enthusiastically. "I love Canada. I think that it's a great place, and there's an area in Vancouver that I find beautiful and appealing, and I can conduct business from there."

As Dunham noted, celebrities from Whoopi Goldberg to Raven-Symone have warned that they'll flee to the north if the GOP frontrunner actually wins in November, but the Girls star isn't joking around. She even has a neighborhood picked out in Vancouver just in case, giving the impression that she's put some thought into the idea. Her feminist newsletter, Lenny Letter, could easily be run from Canada, especially if she takes her partner and BFF Jenni Konner along. She didn't mention Antonoff's plans, but the couple would likely move together, increasing the number of artists America would lose because of a Trump presidency.

Dunham went on the campaign trail with Clinton in January, rocking multiple Hillary-themed outfits while explaining to crowds of voters why she believes the Democrat needs to be the first female president, and she continuously touts her love for the former secretary of state on social media. She definitely isn't taking the election lightly, and wouldn't be able to stand living in a country run by the Republican billionaire who unapologetically belittles and attacks women.

Vancouver is only a short flight away, should Dunham need to pop back to America to film anything, but the U.S. would be left without an influential artist and feminist role model.

More like this
The David Beckham Qatar Controversy, Explained
By Sophie McEvoy
Jennifer Garner's "Lovely Date" To A White House Dinner Was Her Daughter Violet
By Brad Witter
Matt Hancock's “Cringe” Jungle Karaoke Left Twitter Reeling
By Sam Ramsden
Prince William Condemns “Unacceptable” Comments Made To A Black Guest At Buckingham Palace
By Shahed Ezaydi
Get Even More From Bustle — Sign Up For The Newsletter