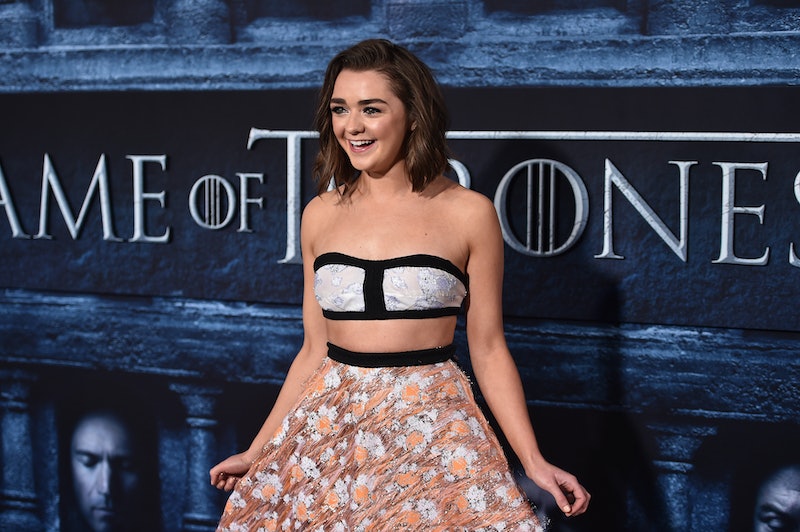 When Arya Stark asks Game of Thrones viewing party hosts to share photos of their viewing parties, for the love of Brienne of Tarth, it is most wise to oblige. And if that request happens to be in all caps? Batten down the hatches and prepare your heart, because maybe, just maybe, Game of Thrones star Maisie Williams will crash your Season 6 premiere party with a paper tote full of snacks on each arm.

A few hours before the sixth season of the HBO fantasy series aired on Sunday, the Thrones star tweeted, “ANY @UCLA STUDENTS HAVING A VIEWING PARTY TONIGHT? TWEET A PICTURE OF YOUR PARTY USING #GameofThrones FOR A SURPRISE.” Williams added that the GoT team would deliver “goodie bags” to one soirée. Neat, huh?

Oh, that was only the beginning.

Now, by "goodie bags," Williams didn't mean a box full of GoT t-shirts and dragon egg keychains and Iron Throne doorstops (however, all of those things would be pretty terrific prizes). By "goodie bags," she meant two grocery bags of crisps and popcorn. And by "the GoT team," she meant "Surprise! It's me, Maisie Williams! Standing on your doorstep! Let's hang out and eat gummy worms!" (I'm paraphrasing.) In a 12-part Instagram post series, the actress chronicled the evening.

She Chose One Very Lucky Party

But before she headed to the get-together, she had some important business to take care of.

She Chose Some Snacks

She Met The Unsuspecting Party Host

"Firstly, I met Mark," Williams wrote. "The buzzer was broken so Mark came down to let us in. After exhaling a 'HOLY SH**!', we hugged it out and he helped us inside."

Just hatching a scheme with Arya Stark on a Sunday night, NBD.

She Surprised The Other Unsuspecting Party Guests

UGH THEY'RE SO LUCKY.

She Cast A Very Important Vote

I don't want to tell those lucky partygoers how to live their lives, but if I were them, I'd probably blow up that picture and put it on a fleece blanket.

Hey, when in Westeros.