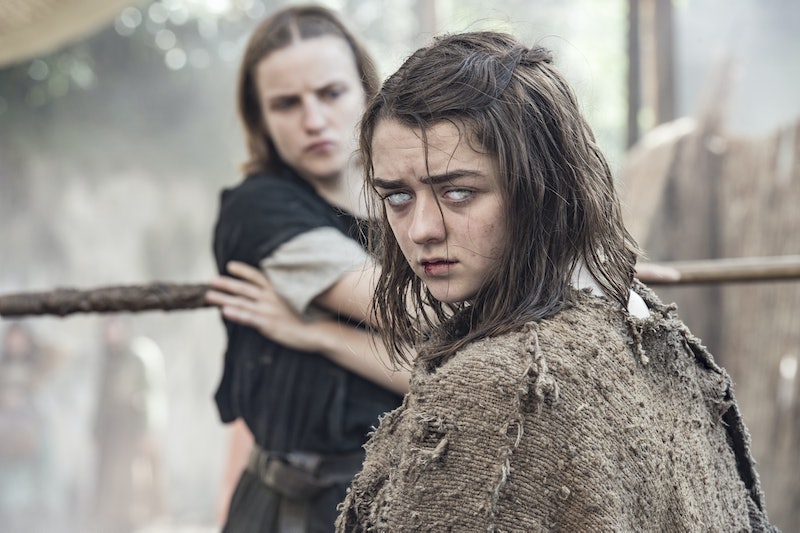 The focus of this year's pre-Game of Thrones has focused on dead characters, but we can't forget the plight of the living on this epic series. For example, how can blind Arya regain her sight on Game of Thrones ? There are some spoilers for A Song Of Ice And Fire ahead, so stick with your own Arya theory if you don't want to know what happens in the books!

In the show, poor Arya Stark had just achieved a major personal victory and crossed a big name off of her hit list, only to be punished by Jaqen H'ghar and blinded. A few changes have already been made to Arya's story. In the A Feast For Crows, her blindness is caused by milk that she drinks and continues to drink nightly — on the HBO series we saw Jaqen render her blind directly. It also wasn't framed as a punishment, just the next step in her training.

It's hard to tell how committed Arya is to the Many-Faced God, and honestly how committed she should be. Sure, they have some pretty sweet assassination skills, but is that really the career path most suited to the Stark girl? She has a family name to uphold! This is a weird bunch, and the fact that they are testing her with blindness is a little intense. At least it seems likely that Arya's blindness is not permanent, and here are a few ways she could get her sight on Game of Thrones.

In A Dance With Dragons, Arya's sight returns when she correctly identifies a priest from the House of Black and White. She has become better at listening and detecting lies, which makes her a better liar herself. (There is also a suspicion that Arya has learned to warg, like Bran, during this time.)

Perhaps this is just a temporary punishment that will expire when Jaqen seems fit. They don't need to follow the trajectory of the novel at this point. This is clearly a trial, and I think the only person who can give her sight is either the person who took it away, or someone with similar skills.

In the Grimm's fairy tale version of Rapunzel, the prince is blinded by thorns surrounding the tower, and Rapunzel's tears give him back his sight. Game of Thrones subverts a lot of stereotypical stories and tropes, so I could see them taking a page from this book and putting their spin on it.

Whatever happens, don't leave the youngest Stark blind for too long, Game of Thrones!