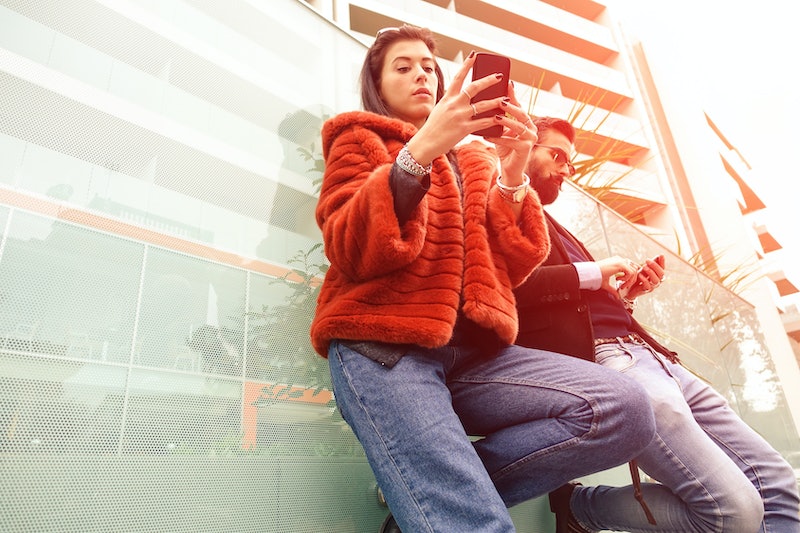 At first glance, how you and your partner text aka how "textually compatible" you are might seem like a minor thing to deal with — or even just one of those “millennial problems” that everyone likes to make fun of us for — but it’s not. We have a bad habit of writing off things that happen in the digital world, like somehow because they’re online they’re not as important as things that happen in “real life.” However, as we spend more and more time online and communicating in various ways through our devices, we have to accept that the communication we’re having digitally has just as much of a real world effect as things said face-to-face. Texts can hurt, and they can mess up your relationship if you don’t mutually figure out how to handle them. A 2013 Brigham Young University study of 273 adults between the ages of 18 and 25 found heavy texting was linked to relationship dissatisfaction among both men and women.

When you first start dating someone, a lot of stuff comes up: What side of the bed they like to sleep on; whether you have the same kinks; how they prefer to fight — and how they like to communicate. That last one is particularly hard because, no matter what the haters tell you, we really are all special snowflakes who have specific preferences for communication. And to make it even more complicated, the options for how to communicate these days are vast. Do you prefer texting, Facebook Messenger, WhatsApp, video chat or do you only communicate via Snapchat? Maybe you’d prefer to talk on the phone (unlikely; this is 2016).

So many choices, right? But it’s not going too far out on a limb to guess that you and your boo are probably using some form of texting, whether it’s via a chat app or just on your phone. Like I said, this is 2016 — barely anyone uses their phone to actually makes calls anymore. And the agony of sitting and waiting for a reply to a text that has been “read” but not not yet responded to is all too familiar. Or the pain of watching those three dots squiggle for like, 10 minutes, only to disappear with no message ever sent. Especially early on in a relationship, being textually mismatched can be crazy-making and potentially relationship-ending.

For example, my partner and I had a period where we had to be long-distance — like different continents long-distance — early on in our relationship. After a couple of really nasty, really hard fights conducted via Facebook Messenger, we agreed that we wouldn’t ever talk about serious stuff using that medium again. Even though it was the easiest way for us to stay in touch while we were so far apart, the very format of texting meant we were misunderstanding and hurting each other a lot more than if we talked stuff out via video chat. Being able to identify that the problem wasn’t 100 percent between us but at least partially due to the technology we were using helped us both step back from the fights and probably saved us from breaking up before we even got started.

Ultimately it is important that you and your partner are textually compatible, but not because all of us crazy millennials are obsessed with our phones. It’s important because the key to a successful relationship is good communication and texting is now a major part of how we communicate these days. The researchers in the BYU study found that texting as a way to apologize, resolve fights, or make decisions was associated with lower relationship quality for women. Texting too frequently was associated with relationship satisfaction for the men in the study. You know what your style is when it comes to texting, but just make sure that's being communicated too.

If you need a response right away and your partner is the kind of person who turns of all notifications and never looks at their phone and it makes you want to scream? Talk about it! Let them know that the current system you two are using isn’t working for you and you want to come up with a solution. The conversation doesn’t have to be “WHY DON’T YOU EVER RESPOND TO MY TEXTS?” though. It can be, “Hey, can we work out a better way to stay in touch that works for both of us?” The key to a great relationship is good communication and texts are a big part of how we communicate.