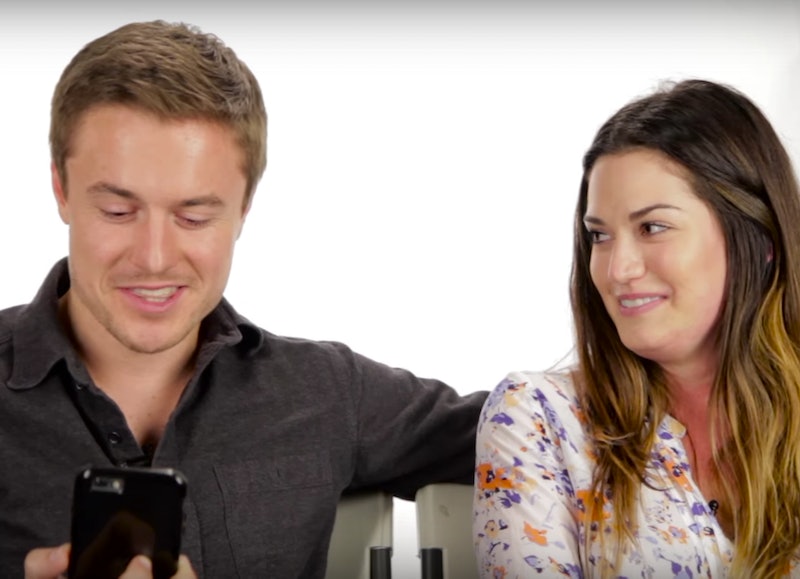 What would happen to your relationship if texting disappeared? If there were no quick messages, no “lol”s, no emoji. Would you hardly notice it, or would your relationship burst into flames? In a new video, BuzzFeed asks that very question and challenges couples to give up texting for a month. Guys, it’s a gruesome four weeks.

At the beginning of the video, three couples embark on the challenge. For these pairs, texting is a primary form of communication. One couple explains, “We text, any given day, like a hundred times.” Another says, “Texting is pretty much how we communicate throughout the entire day.” Given the importance of texting to their relationships, it’s no surprise that the transition to going text-free is a rough one. Some of the participants struggle to put down their phones, and, partway through the challenge, one couple admits to having “epically failed” and taken up texting again within a day of starting the challenge.

One couple attempts repeatedly to communicate by talking on the phone, only to have constant problems with reception. “You might rethink calling this video ‘Couples Don't Talk For A Month,’” one of the guys says with frustration. (Poor reception sucks, but this part did have me wondering, “Dude, who is your cell phone provider?” Because you should probably switch to something that lets you actually talk on the phone).

To be honest, when I first thought about this challenge, my initial reaction was “Oh, come on. It can’t be that hard.” After all, these couples haven’t been asked to give up communication altogether — they can still call and email, as well as use texting substitutes like Facebook messaging, Snapchat, and so on. What’s the big deal? Then I found myself wondering, Are these couples too dependent on texting, or is my skepticism just evidence that I’m an old hoary crone who remembers the days when mobile communication was literally science fiction?

Ultimately, I realized that every couple has its own particular dynamic — and that when you change that dynamic in a dramatic way, it’s just hard. So for a couple that texts a lot, turning off that ability would be a real hurdle, just as asking a couple that talks on the phone a lot to switch over entirely to texting would also be a major challenge.

In the end, the couples each had a different reaction to their text-free months, though all of them were relieved to get their texting privileges back. One couple had a really difficult time giving up the habit, saying, “Just like an addict, we relapsed.” Another completed the challenge, but seemed so-so about the results. “I don’t know that we learned to communicate better,” one man explained. “We just learned that we can get by with communicating a lot less.”

For one couple, Annie and Ben, giving up texting did seem to benefit the relationship. They found that, without texting, they ended up hanging out in person and talking on the phone a lot more than usual. They also said that the no-text rule made them more excited to hang out. “When we see each other, it’s like, ‘Oh my God, it’s you!’” Annie explains.

More like this
Are Gemini & Scorpio Compatible In A Relationship?
By Kristine Fellizar
The Most Compatible Life Path Numbers, According To Numerologists
By Kristine Fellizar
25 Questions To Ask Your Friends When You're Bored
By Lexi Inks
15 Flirty "Thinking Of You" Texts That’ll Make Your Crush’s Day
By Lexi Inks
Get Even More From Bustle — Sign Up For The Newsletter