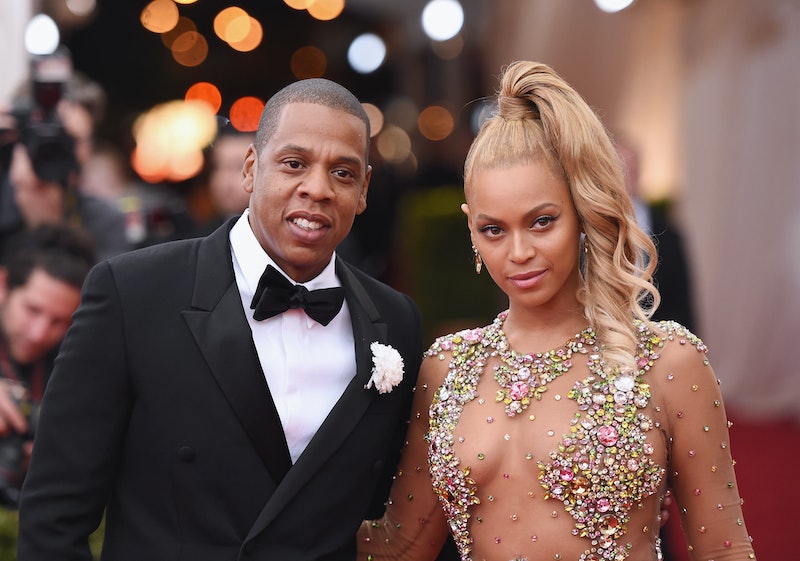 It's been almost 72 hours since Beyoncé's Lemonade special premiered, but it's still all I want to talk about — and I'm definitely not alone in that. The album itself is amazing, but what's really intriguing about it is the fact that there could be truth behind her lyrics, exposing a side of her marriage that the public has never gotten to see before. The obvious message of the story being told is about cheating, so it makes sense to assume that there's a possibility Jay Z cheated on Beyoncé and that the situation in her life inspired this album. And if that is true, now the whole world knows a lot about their personal life, few details spared. So what does Jay Z think of Lemonade ?

Bustle has reached out to reps for Jay Z and Beyoncé, but has not yet heard back.

Honestly, I've been dying to know the answer to that question since I first watched Lemonade. If everything Beyoncé implies is true, what could he be thinking? Unfortunately, we may never have a real answer to that, because so far, the "99 Problems" rapper is keeping his lips zipped. He's never been too active on social media, but he hasn't posted anything in over a week, and he definitely hasn't released any sort of official statement on the matter.

Regardless, it's probably safe to say he's planning to avoid taking Bey anywhere that she could get her hands on a baseball bat for awhile, and that's probably for the best.

In all seriousness, though, Saturday night was probably not the first time Jay Z saw Lemonade, unlike the rest of us. Being that he had his hands in the project in so many ways, from streaming it on Tidal (which he owns) to actually appearing in it to just being married to its star, he's probably seen it many times and the content of these songs and videos definitely isn't news to him. He's probably had time to process everything — if it's even adapted from real life, that is. In fact, maybe he's even OK with all that, allegedly, dirty laundry being aired out for the world to see.

If the story Beyoncé weaves is based on truth, it's important to remember that Lemonade wasn't made overnight. This album had to have been months if not years in the making, and if Jay Z really cheated, it could have happened a long time ago. It could have been something that he and Beyoncé worked through and past, and their relationship could be in a much different place these days. The ending of the video and the song "All Night" seem to suggest that this story ends in forgiveness, so maybe that's what really happened, too.

For now, we have to resort to memes. Not that I'm complaining, because chances are Jay Z's imagined responses are way funnier than what he'd actually say, given the chance.