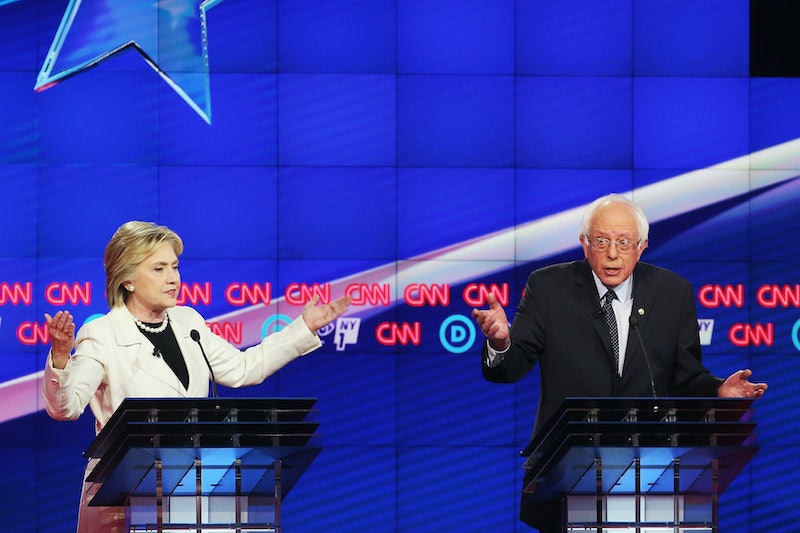 Apparently, Bernie Sanders does not want to share his candy. On Monday—the eve of April 26's Hunger Games-esque bloodbath of five state primaries—Sanders said that if Hillary Clinton won the presidential nomination, she'd still have to win over his supporters. In a town hall with MSNBC's Chris Hayes, an audience member asked Sanders if he would encourage supporters to back Clinton if she were the nominee. He said, "We’re not a movement where I can snap my fingers and say to you or to anybody else what you should do, that you should all listen to me. You shouldn’t. You make these decisions yourself."

So, more succinctly, no. Then he got bitter, saying,

"And if Secretary Clinton wins, it is incumbent upon her to tell millions of people who right now do not believe in establishment politics or establishment economics, who have serious misgivings about a candidate who has received millions of dollars from Wall Street and other special interests. She has got to go out to you."

Sanders evidently does not want to play nice with Clinton, which makes sense as the race gets harder and harder for Sanders, who still trails Clinton in votes and delegates. But to me, his words were a show of pettiness. They were certainly a far cry from Clinton's unconditional backing of Barack Obama after she lost the nomination to him in 2008. Furthermore, it may be even more crucial nowadays for the Democratic candidates to show a united front against the phenomenon known as Donald Trump, but Sanders' words disregarded that.

Sanders' remarks showed that his ideals and issues took priority over unity in the Democratic party. Sticking so fiercely to his values is admirable — but it is also tone-deaf in the current political climate: I firmly believe he possibility of President Trump requires everyone to rally together.

Granted, to a degree, there's truth to Sanders' statement. To some extent, Clinton will have to win over Sanders' fans: Celebrity feeler-of-the-Bern Susan Sarandon hinted that Trump may be more appealing than Clinton, and a recent poll by the Harvard Institute of Politics revealed that only 37 percent of millennials — one of Sanders' biggest bases — viewed Clinton favorably. Sanders' claim that his supporters won't immediately throw their weight behind Clinton has a lot of validity (as shown when Bustle writer Alexi McCammond interviewed some of them at a rally in Syracuse).

However, that same Harvard Institute of Politics poll also showed that millennials would choose Clinton over Trump 61 percent to 25 percent. Not a shabby number.

The only person Sanders' comments may hurt is himself, as they highlight a vindictive, and therefore decidedly unpresidential, tone.

Historically, Democratic candidates end up supporting each other as well. Obama was unanimously nominated in 2012, so okay, that doesn't quite count, but Clinton endorsed Obama once she lost to him in 2008. In a town hall with MSNBC's Rachel Maddow on Monday, Clinton recounted, "I didn’t say, ‘You know what, if Sen. Obama does W, Y, and Z maybe I’ll support him.' I said I am supporting Sen. Obama." In 2004, former North Carolina senator John Edwards lost the nomination to John Kerry and then became his running mate. In 2000, former New Jersey senator Bill Bradley lost to Al Gore and promptly endorsed him.

Sanders isn't your friendly neighborhood Democrat, but it may be time for him to start acting like one — if not for the sake of the party, then for himself.