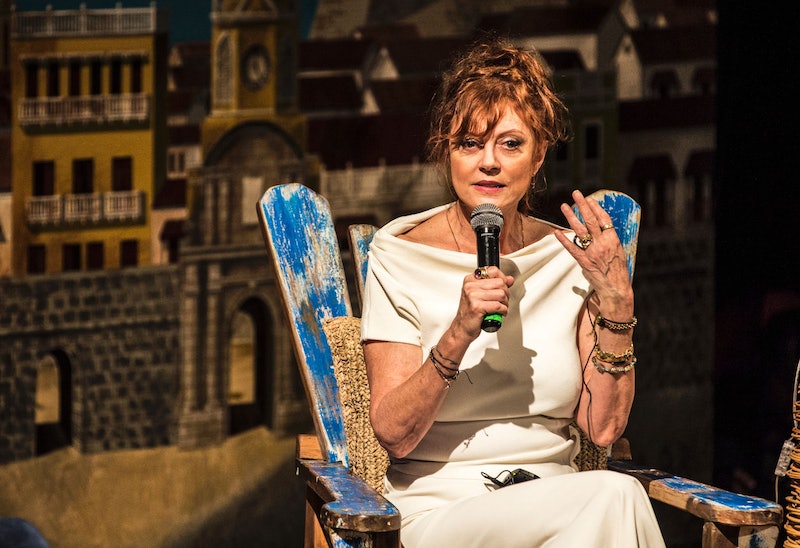 On Monday, Oscar winner and major feeler of the Bern Susan Sarandon said that if Bernie Sanders lost his bid for presidential nomination, she isn't sure if she could throw her support behind Hillary Clinton. "I think a lot of people are, 'Sorry, I just can't bring myself to [vote for Clinton],'" Sarandon told Chris Hayes of MSNBC. When Hayes pressed Sarandon and asked about how she would personally vote in such a scenario, she replied, "I don't know." This crooked line of thought reveals how very famous, very rich, very white, and very privileged — and therefore how out of touch — she is.

Sarandon, for example, did not consider how Donald Trump's campaign has disparaged minorities and played on xenophobic rhetoric. She also didn't consider how her status as a woman would be in jeopardy under President Trump, perhaps because she holds privileges other women don't. Trump is anti-choice, has spoken out about defunding Planned Parenthood, and has flaunted sexist comments in public. His policies could be incredibly damaging to women. That this wasn't on the forefront of Sarandon's mind reveals how rarely it may be in the future too, because affordable and accessible reproductive care wouldn't be an issue for her or her family, considering their wealth.

So what's Sarandon's primary reason for dismissing the danger of a Trump presidency? "Some people feel that Donald Trump will bring the revolution immediately if he gets in, [that] things will really explode.” You can watch her electing-Trump-may-be-better-than-electing-Clinton logic on complete display below in this video:

Let's look at the logic here. As bizarre as it may seem to me, it could scarily sway Sanders' supporters to Trump: Trump is so volatile that he'll be an immediate catalyst for change — and whatever that change is, it would be better than what everything's like now. There's a lot wrong with this line of thinking. First, not all change is positive. It's overly simple and frankly thoughtless to assume that revolution for the sake of revolution without the right goals and priorities in place would necessarily be a good thing for the country. And apart from how total governmental upheavals don't occur overnight and do incur sweat, blood, and toil, the fact that Sarandon can entertain this idea at all reveals more of her privilege. The "revolution" she mentions will not affect her so much as people who don't have all the protections her privilege lends her. She won't be the one who sweats, bleeds, and toils.

Sarandon went on to say, "It's dangerous to think we can continue the way we are, with the militarized police force, with the death penalty and the low minimum wage and threats to women's rights, and think you can't do something huge to turn that around."

Now let's hone in on one phrase: "Threats to women's rights." This is especially galling for those of who care about women's rights, since Sanders and Clinton have both made clear that they do. Threats to women's rights are very real, but bringing in Trump, with his anti-reproductive-rights stance and history of misogyny, to push a tipping point over these threats would be about as effective as throwing kindle onto a fire to put it out. Like a Sanders supporter voting for Trump over Clinton, it's not only counterintuitive, but more dangerous.