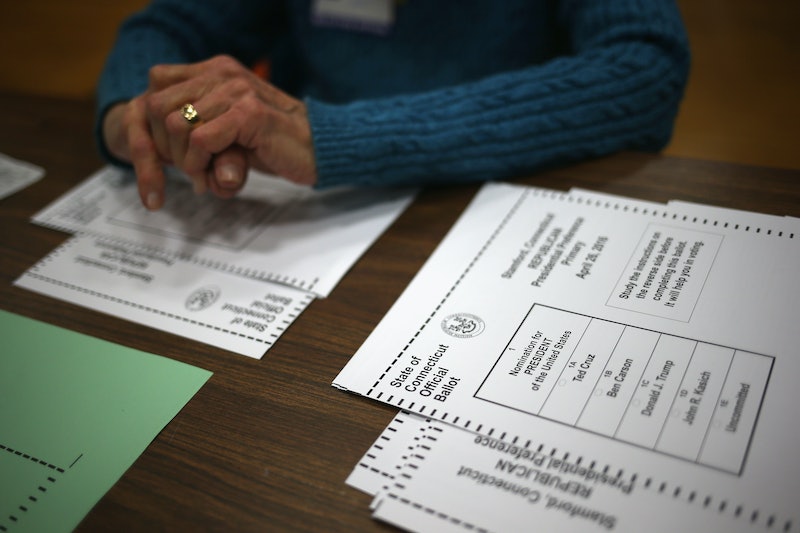 For the the candidates remaining in the race, things are getting real. Since announcing their bids for the presidency they've hopped from state to state campaigning and endured dozens of elections in just the past three months. After Acela Tuesday, a total of 16 primaries remain in the homestretch. Better yet, only eight of them — Indiana, West Virginia, Oregon, California, Montana, New Jersey, New Mexico, and South Dakota — will host both Republican and Democratic elections. Of those states, California, which offers 546 Democratic delegates and 172 Republican ones, will be the most important.

The remaining eight elections will be held by only one Party. Democrats from Guam, Kentucky, the Virgin Islands, Puerto Rico, North Dakota, and the District of Columbia will hold their respective primaries and caucuses in May and June. On the opposite side of the aisle, Republicans from Nebraska and Washington will cast their votes on May 10 and May 24. As the primaries drag on, the playing field has begun to shrink down to just two players: Hillary Clinton and Donald Trump.

Though neither has reached the number of delegates required to sweep a nomination, each holds a substantial lead. Clinton, for example, is leading Sanders by 275 pledged delegates. If you count unpledged superdelegates, the gap is even worse. Though superdelegates don't officially side with a candidate until the National Convention, 477 of them have prematurely pledged their allegiance to Clinton. If Sanders wants to catch up with her pledged delegate count alone, he would have to win 60 percent of the remaining pledged delegates according to CBS News' calculations. Seeing as Clinton has a good shot at winning a majority in Acela Tuesday's two largest states — Pennsylvania and Maryland — he has a long, arduous road ahead of him.

The Republican Party, on the other hand, is currently breaking down as Trump solidifies his lead and inspires his two opponents, Ted Cruz and John Kasich, to team up and keep him from winning 1,237 delegates. Cruz and Kasich's end goal, in that case, is a contested convention. In other words, they're banking on complete chaos. It might be the homestretch, but they're doing everything they can to buy the GOP as much time as possible before a Trump takeover. And as soon as the primaries end, the nation's eye will turn towards the National Conventions, which could spark intense controversy if delegates don't side with the popular vote.