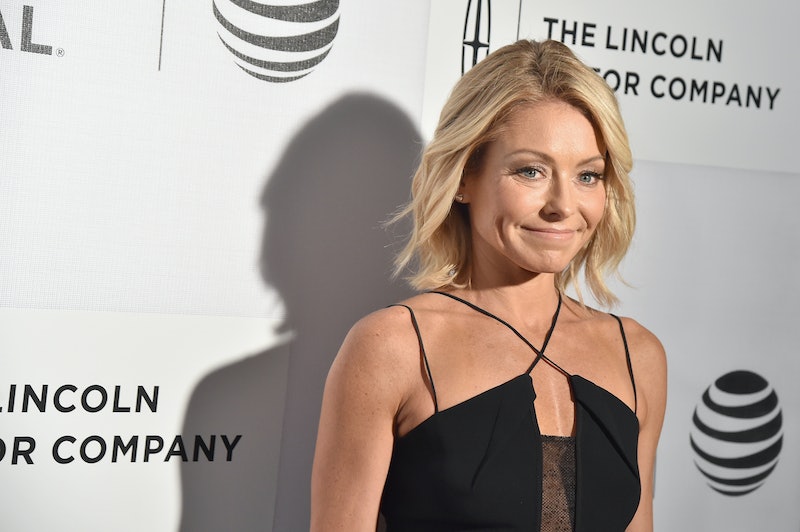 On Tuesday, April 19, fans were shocked by the announcement that Michael Strahan was leaving Live! With Kelly and Michael for a daily spot on Good Morning America. However, it seems like nobody was more surprised about the news than co-host Kelly Ripa herself. The long-time head anchor of the morning talk show remained silent immediately following the news and even ended up taking a week-long break from Live! , one that fans thought was in shock of the news but was really a pre-arranged vacation for her and her husband's 20th anniversary. On Tuesday morning, the host returned to the show, and, when Ripa spoke out about Shrahan's departure, it was with a lot of grace and thoughtfulness that we can all learn from.

Live With Kelly And Michael opened their Tuesday morning show with Ripa directly speaking to fans of the 30 year show about both her feelings over the news and what her week-long break from the show was really about. She exuded confidence and poise in her red dress, while also providing an honest and teary-eyed take on what the drama of the last week was all about. She assured fans that, "Apologies have been made and the best thing to come from all of this, you guys, is that our parent company has assured me that Live! is a priority." She also went on to express her feelings for co-host Michael Strahan as he listened off-camera in saying, "I am thrilled for Michael, I am thrilled for you. This is a tremendous opportunity and I couldn’t be and we couldn’t be prouder of you and everything we’ve accomplished together."

Watch the entire emotional and professional response below.

However, one thing that seems to speak loudest to me in Kelly Ripa's speech is her notion towards what their workplace situation being in the spotlight could mean for companies moving forward. In fact, the light-hearted talk show host turned an awkward and messy situation into a positive experience for all companies. "What transpired though over the course of a few days has been extraordinary, in the sense that it started a much greater conversation about communication, and consideration, and most importantly, respect in the workplace," said Ripa. "And since we’re being honest, I don’t consider this just a workplace — this is my second home. This is a place that I’ve devoted myself to not just because of you, our loyal viewers but because of all of the producers and incredible crew who work on this show. We have an incredible team completely devoted to one another."

While Michael Strahan will be continuing his move to Good Morning America, the search for a new Live! co-host will continue. And, hopefully, the importance of communication in workplaces across the country will be taken into consideration. So, if you have anything to say to your boss, say it now. Kelly Ripa would be proud of your decision.