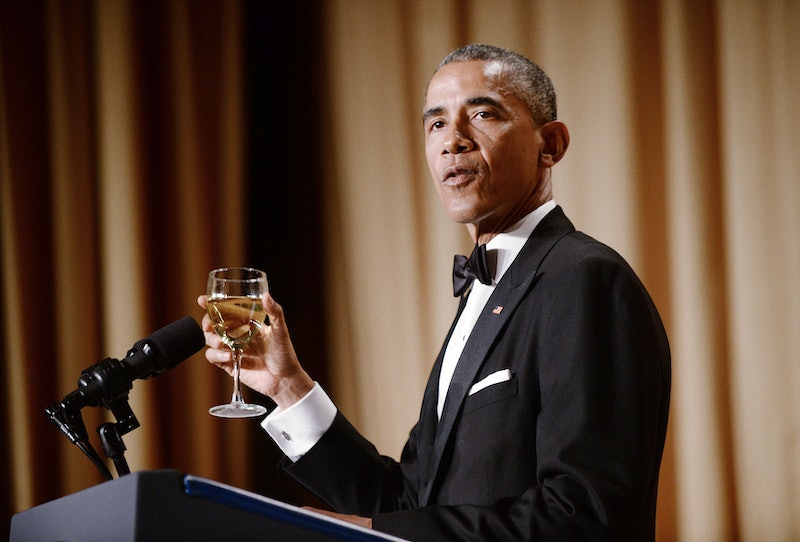 Affectionately known as “nerd” prom, the White House Correspondents' Dinner is an opportunity for Washington and Hollywood to combine — movie stars mingle with the press, the President tells jokes to entertainers, and everyone gets dressed up and has a grand old time. With so many people of different backgrounds in one room, I’m sure that there can be awkward moments. You know what helps me in awkward situations? Booze. Can guests drink at the 2016 White House Correspondents' Dinner? You bet your bottom dollar they can.

Back in 2014, then-President of the White House Correspondents' Association Steve Thomma told U.S. News & World Report, "It's still just a dinner ... We serve alcohol. We hire a guy to tell jokes. It's not meant to be serious. It's meant to be a fun evening." And more recently on April 29, Yahoo News' chief Washington correspondent Olivier Knox told The Hollywood Reporter, "One thing you can't really tell by watching is how loud it is in that room ... It gets very, very loud – possibly because of all the drinks consumed during the pre-dinner cocktail hours." So not only can guests have a drink alongside their actual dinner, but there will be alcohol served before things get started, ensuring that there's more than enough booze to go around.

The 2016 White House Correspondents' Dinner is shaping up to serve quite the roster, too. According to Deadline, Larry Wilmore, host of The Nightly Show, will get hosting duties, and the guest list is extensive. JC Chasez from ‘NSYNC will be there, as will Sela Ward, Jeff Goldblum, and Will Smith. Also attending the WHCD are Ilana Glazer and Abbi Jacobson from Broad City, Kerry Washington, Scott Foley, and Tony Goldwyn of Scandal, football stars Von Miller and Odell Beckham, Jr., Miles Teller, Kendall Jenner, Neve Campbell, Morgan Freeman, and many, many more.

Because there will be alcohol available and a plethora of stars there, I’ve come up with some dream scenarios that I wish would happen at this year’s WHCD.

Let’s say the dinner is, for some reason, really boring. Armed with a glass or seven of champagne, what if Ilana and Abbi from Broad City teamed up with ginormous football players Odell and Von for a good, old-fashioned chicken fight in the White House fountain. That would certainly make for a splash. For what it’s worth, my money’s on the duo of Ilana and Von.

Tony Goldwyn Puts Himself In The Presidential Race

Sure, Tony Goldwyn plays the President on Scandal, but what if his role as Fitzgerald Grant has made him want to become the President IRL? I’m sure the ABC series has given him plenty of ideas of how to stage a major moment like that.

Someone Wears A Scream Mask To Freak Neve Campbell Out

Sure, it’s been two decades since the first Scream movie came out, but I doubt Campbell could ever forget her role as Sidney Prescott. One tall guy in that long, droopy mask jumps in front of her and I bet she'd bring some of the kickass moves from Scream to Washington, D.C.

So these occurrences probably won’t happen, but it would make for quite the evening in our nation’s capital. We’re used to just listening for the best jokes, but how about a little action, huh?

More like this
What Is Barack Obama’s Net Worth? He Makes *Way* More Now As An Ex-President
By Hugh McIntyre
BTS Is Visiting The White House To Discuss Anti-Asian Hate Crimes With President Joe Biden
By Jake Viswanath
Shocked Fans & Former Co-Stars React To Ray Liotta’s Death At 67
By Grace Wehniainen
'Stranger Things' Star Joe Keery Is Dating An "Indie Scream Queen"
By S. Atkinson and Grace Wehniainen
Get Even More From Bustle — Sign Up For The Newsletter