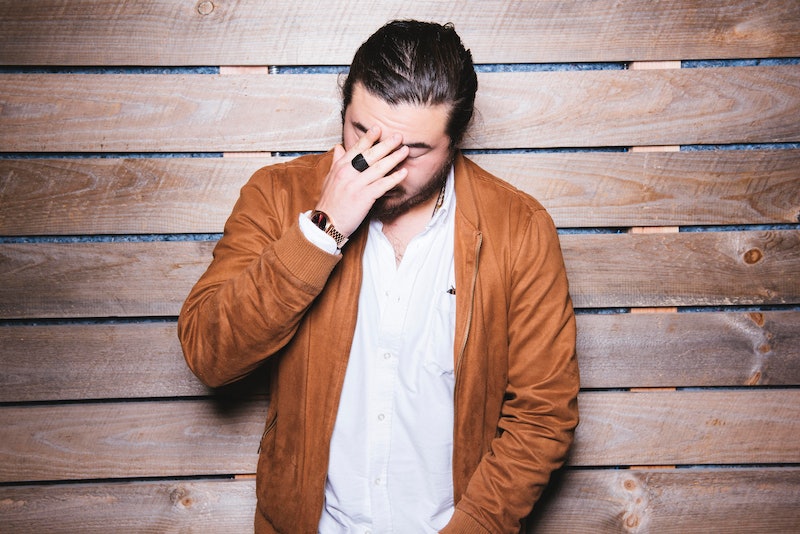 Bad dates suck, but they're good for creating the kinds of tales you tell your squad over cocktails while you laugh-cringe. Many of the tell tale signs of a bad partner that you can spot on a first date are kind of universal. Sure, all dates and people are different, but there are some common threads to the kinds of dates that are more likely to end in pepper spray than butterflies. And if you're someone like me who's too trusting, having some knowledge beforehand of dating red flags can save you tons of disappointment in the future.

As a former Domestic Violence Victim Advocate and Planned Parenthood Certified Responsibility Educator, the group sessions I lead about how people got involved with their bad partners usually ended with some version of "I should have seen it from that first date" or "I should have trusted my instincts." Because abusive tendencies and jerk behaviors tend to peek out in tiny ways, even in the very beginning. They can be subtle, so no shame if you missed the signs that were pointing you in the face. You live, you learn. But just in case you need a little bit of a road map, here are some things to look out for. And, as with most things in life, some of these behaviors don't necessarily mean your date is a future abuser. But sometimes they do! There's safety and power in knowledge.

1. They're Too Good To Be True

Controlling behaviors aren't just annoying, they're red flags for serious relationship problems, like abuse, jealousy, and manipulation. They can even be a precursor to violence. If your date wants to make all the decisions, and even control little things, like where you sit, what you order, and in what order you eat it, run away. I repeat: Run away. Controlling behaviors are dangerous.

Controlling People: How to Recognize, Understand, and Deal with People Who Try To Control You, $11, Amazon

Jealousy is tied to control and control is tied to abuse. A first date is really no time for jealousy, especially jealousy that leads to fights, controlling behaviors, changed plans, changed outfits, or hurt feelings. That's too much, too soon, and it's not likely that a relationship that starts off on this foot will head in a healthy direction. Proceed with caution, if at all.

If your date talks about their ex way too much for a first date, there's a good chance they are not completely over that relationship — even if they think they are. If that's the case, then things are going to get complicated when your start to develop feelings for each other and those feelings trigger all those ex issues. You could be a rebound. You could fall for someone who isn't emotionally available. It's just not a good idea.

When someone is inappropriately impatient, it's often a sign of an anger issue. Sure, it could just be some ADHD or a hatred for waiting in lines, but it could also mean that your date is used to, and expects, having things their way. It's probably only a matter of time before they lose their patience with you.

Back in my day, you put your phone in your purse, and you only checked it when you were going to the bathroom. But now, phones are pretty much like limbs. If your date texts and checks a couple things on their phone from time to time, no big deal. But if they're paying more attention to their phone than you, that's a red flag. Does your date not value your time, or your presence? Plus it's rude. And if they're not on their phone, but they're just not there, mentally, that's just as bad.

7. They're Rude To Servers

Deal breaker. A person who is rude to servers, bar tenders, and other service workers is not a nice person. This is a really good insight into your date's personality. Even if they've been trying super hard to be sweet to you, but then they go into full-on ass mode when talking to your server, you should not be fooled. Good people don't treat others like they're less than or undeserving of respect. How long until they disrespect you?

I have a friend who went on a date with a super hot person, and on the date, this person actually laid out a list of expectations, like "must always wear mascara" and "keeps her nails and hair done and her body hair-free." Excuse me? Are you looking for a partner or a pet? This does not sound like a person who is interested in loving you as you grow old, ugly cry, vomit with the flu, or, you know, just don't freaking have time to get into super model mode to lounge around the house. Also, it smacks of control issues, insecurity, and doucheyness.

Five minutes into the date, do you already know that your date hates animals, doesn't like their mother, can't stand pop music, thinks voting is stupid, and doesn't understand why people even go to the restaurant you're at? Phew. That's a lot of negativity in a short time. There's a good chance that this person is not going to be an uplifting and supportive force on your journey toward becoming your best self. Just saying.

Emotional Freedom: Liberate Yourself From Negative Emotions and Transform Your Life, $14, Amazon

If you're just meeting someone for the first time and they launch into several weird rants about their most personal drama they're either epic story tellers, or socially inappropriate over-sharers. Examples could include abortions, suicide attempts, genitals, or shockingly complex feelings about their parents. Not that there's shame in any of these issues, and I'm a classic vagina story teller, but, you know, maybe learn my name first, and let me order dinner first? And, are you going to be like this when I introduce you to my mom?

11. They Constantly One-Up You

You know the type. Every story you have, they have a better one. Everything you've done, they've done it better. Everything you like, they like it more. *Eye roll* A one-upper or over-competitive person is usually an insecure person, or a people pleaser who just wants you to think they're cool. You'll probably realize that you're not dating the person you thought you were dating once you get to know each other.

12. They're A Casual Misogynist

If your date says something like "you're not one of those feminists, are you?" then you need to tread lightly. Either they're a good, but just slightly misguided person, or they have some deep-seeded woman hating in their souls. Listen to the way they speak about other women in their lives for clues about which one you're dealing with. If it's all negative and hateful, it's probably a red flag.

13. Over The Top Drunkenness In General

First dates are usually a time to put your best foot forward, but to also be cautious about stranger danger. If your date gets totally loaded on your first time out of the gate, it's probably a bad sign. Sure, it could just be poor decision making in response to serious nerves (because you're super awesome and everyone wants to date you, like, super bad), but it could also mean other problems. Alcoholism. Poor coping skills. Poor social skills. Crippling insecurity. You know, that kind of thing.

It's your first date. It's the date where you get to know each other a little bit, because, and this should be obvious, you don't know each other that well (exceptions apply, of course). It's not typically the date where you declare your undying love, talk about your future children, or even say things like "I bet we're going to get married." I just anxiety vomited in my mouth a little from typing that. Clingy and obsessive do not make for a good partner.

Rude. Argumentative. Critical. And maybe smug in a way you can't put your finger on. Or maybe just an attitude about everything, like they can't be bothered, they're bored, they're wasting their time, or you're not interesting at all. That's not a great way to set the stage for a future relationship. People in love tend to like each other and be nice to each other. Just saying.

This list is not exhaustive, by far, but it's a good starting point for gauging whether you're on a date with a future lover or someone you need to block on all your social media accounts just do you don't have to see their stupid face ever again. Good luck!