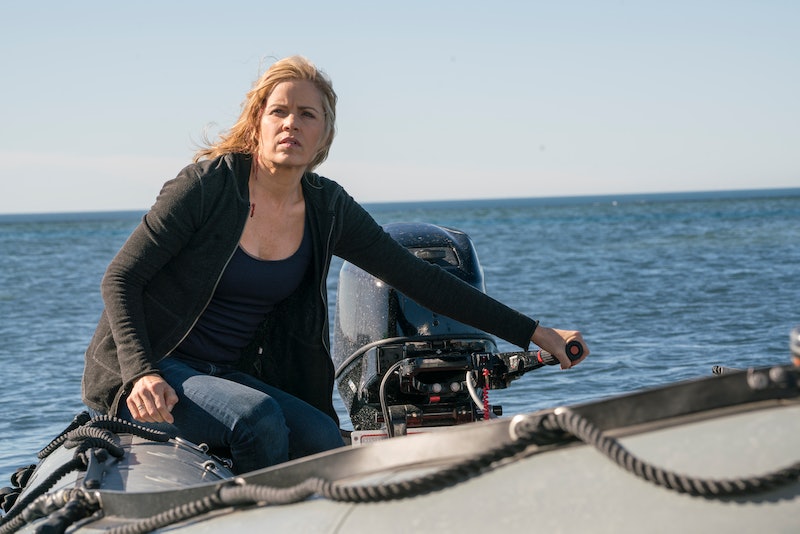 It took a while, but Sunday's episode of Fear The Walking Dead resembled the original series in a major way. While I love the way that this series is able to distinguish itself from The Walking Dead, it was cool to see how these new characters dealt with familiar situations. Jack returned on Fear The Walking Dead and we got a glimpse of the first group of evil or cult survivors who have sprung up on the West Coast. Plus, both Travis and Alicia have been kidnapped, so Madison is finally due for her heroic turn.

Of course, there is one specific to this storyline that could pretty much only be achieved on the ocean-based spinoff — piracy! Lo and behold, the radio pen pal that Alicia made in the Season 2 premiere was not a trustworthy fella. Who didn't see that one coming? On the show, he's played by Daniel Zovatto in what will be a recurring role, according to Deadline. Anyway, Jack boarded the Abigail in the middle of the night with his brother and sister-in-law. It wasn't long before they had taken over the vessel and tied up its passengers. Strand, who opted to jump overboard and sneak attack the attackers, got shot. Nick was off running errands.

However, these three youths aren't lonely pirates. They work for a man named Connor. After several struggles and the introduction of a few new characters, Connor's crew loses control of the Abigail, but not before making off with Madison's daughter and boyfriend. At the end of the episode, the former guidance counselor took off with a motorboat, rescued Strand, and is presumably on her way to reunite her family. Thank goodness Nick is OK, and doing... whatever Nick is into doing.

Alicia seems safe, Jack obviously doesn't want his love to go to waste. He doesn't want just anyone to hold. Lame jokes aside, the kid does seem to actually like her. I'm more concerned about Travis, who is taking way too long to adjust to the realities of the zombie apocalypse. Compelling, maybe, but frustrating nonetheless. Mostly, I can't wait to see what Connor's whole group is like on Fear The Walking Dead. They clearly formed super fast, and are definitely making the most of the apocalypse in a ruthless way.

Editor's Note: This post has been updated from its original version to reflect the actor's correct name.