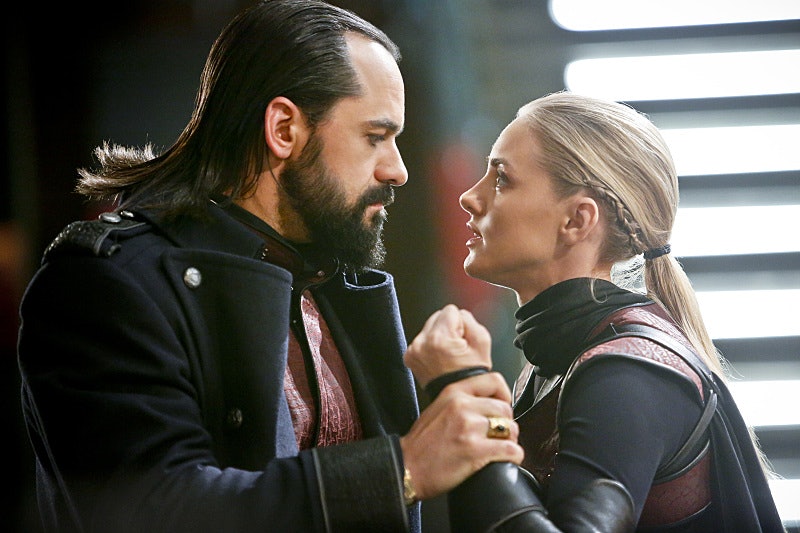 All throughout Season 1 of Legends of Tomorrow, the team aboard the Waverider has been attempting to track down Vandal Savage and defeat him before he's able to take over the world/kill Rip Hunter's family. However, aside from Vandal's ties to Kendra and Carter, we still don't know too much about him. All that's about to change when the team travels to the future and meet an important person in his life. So, who is Vandal Savage's daughter on Legends of Tomorrow and could she be important to the Legends themselves?

OK, let's dive into the comics to see if we can find out any clues about Vandal Savage's mysterious daughter. First thing you should know: There are two different versions of Vandal Savage in the history of DC Comics, and each iteration has a daughter. One is named Scandal Savage, who regularly sides with evil like her father and fights with the villainous group Secret Six. However, a newer version of Vandal Savage's daughter is Kassidy Savage, who grows up to become an FBI profiler specializing in serial killers, while her father is imprisoned for being a serial killer. Both versions of Savage's daughter grew up without him, whether because he was in prison or off conquering the world, and have a tense relationship with him.

Now, let's talk about what we know of Savage's daughter on Legends of Tomorrow — who will be called Cassandra. In the official synopsis for "Leviathan" released by ComingSoon.net, Cassandra will be an important "key" in the Legends' plan to take down Savage:

Rip takes the team to London in the year 2166, three months before his family is killed. He believes this to be their final opportunity to take out Savage who is, unfortunately, at the height of his power. However, the team discovers two key elements to defeating him – Savage’s daughter (guest star Jessica Sipos) and the means to kill Savage once and for all.

Additionally, the promotional photos for "Leviathan" seem to insinuate Cassandra and Savage's relationship falls in line with the tense father/daughter dynamic of their characters in the comics. But, the official trailer for "Leviathan" released by The CW does show Cassandra fighting the Legends, and standing by Savage's side like an incredibly loyal daughter.

So what does all this information about "Leviathan" and the comic book history mean for Vandal Savage's daughter on Legends of Tomorrow? My theory is that she will be a mix of both the Kassidy and Scandal characters, with fighting skills and perhaps a role in some futuristic police force. However, I don't think Cassandra will be as loyal to Savage as the trailer makes her out to be. In fact, I wouldn't be surprised if she ends up helping the Waverider team take on her father. But, we'll have to wait and see how the relationship between Vandal Savage and his daughter unfolds on Legends of Tomorrow to know for sure.