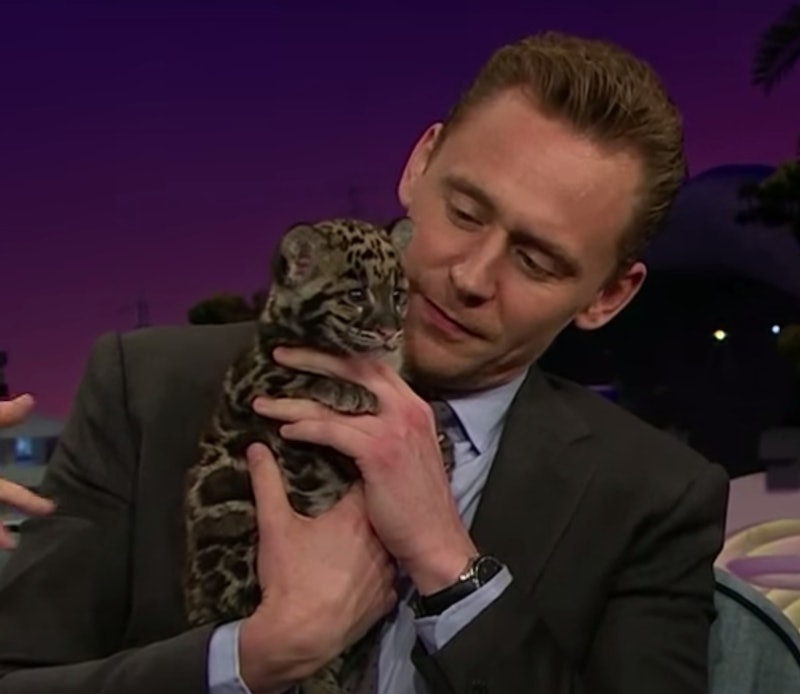 Never have I ever loved James Corden more than I do right now. During Monday's broadcast of The Late Late Show With James Corden, Tom Hiddleston made an appearance, alongside Silicon Valley's Thomas Middleditch. Just having T. Hiddles there in body is enough, but when Corden brought out Jack Hanna, who also happened to be holding two baby leopards, well, it turned an already amazing moment into something beyond spectacular. In what is most definitely not an impossible task, picture Tom Hiddleston holding a baby leopard. Did you just get chills due to the cuteness? Well, it's about to get even cuter, because I decided to make gifs of Hiddleston holding the baby leopard.

It's a tough job, but someone's got to do it. Plus, this is just my way of not only giving a gift to myself, but also doing a good deed for the day. I mean, who doesn't want to look at a bunch of gifs of T. Hiddles cuddling, petting, and gushing over a baby leopard? Obviously, this has been a lifelong dream of mine and I'd like to thank Corden for bringing it to life.

Prepare to *swoon* over Hiddleston and the cutest baby leopard you have ever seen.

1. Here's When He First Received It

What a glorious first meeting.

2. Here He Is Confused About What To Do With It

3. Here He Is Embracing It

At this moment, Hiddleston uttered these exact words: "So sweet."

4. Here He Can't Stop Petting It

5. Here He Is Laughing At Thomas Getting Bit

That laugh always gets me.

6. Here Is Looking At It Longingly

The baby leopard just loves him that much.

8. Here Is Their Family Picture

9. Here It Is Crawling All Over Him

Yep. The leopard is a huge fan.

10. Here It Is Grasping Onto Him For Dear Life

12. Here It Is Exploring

Or as Tom said, "It's like an adventure playground."

13. Here It Is Exploring, Again

And Tom is just so chill about it all.

14. Here He Is Wanting Some Penguin Action

16. Here It Is Snuggling Tom

Who doesn't want to nuzzle Tom?

17. Here He Is Replicating The Lion King

Clearly, Hiddleston had a blast as he tweeted Monday night:

If you want more, watch the video in its entirety here. FYI, it features six minutes of Hiddleston and the baby leopard. Six. Minutes. Seriously, thank you, James Corden.