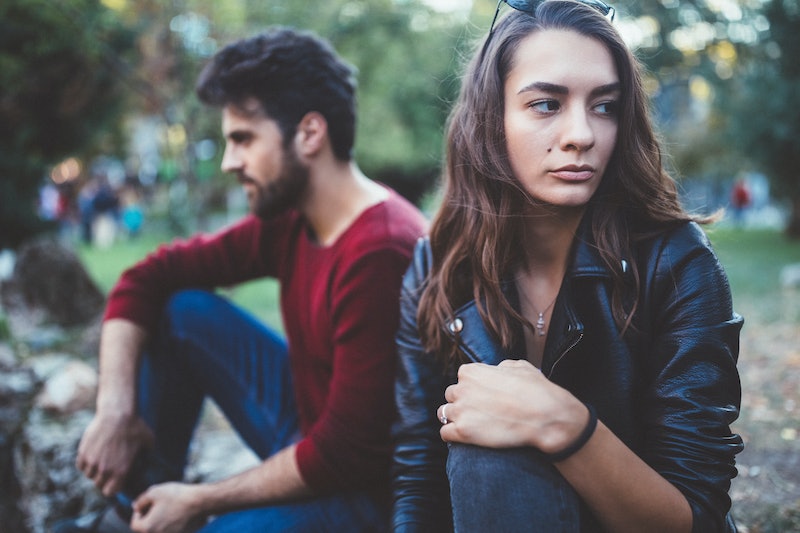 Every couple goes through issues — in fact, it's not only normal, it's actually healthy. If you "never fight" or even talk about disagreements with your partner, then you're either not talking about it properly, or you're so bizarrely well-adjusted you should have a reality show. (I would watch the hell out of that. Who cares about the dysfunctional folks who populate reality TV, when we could all be watching the rare birds that are a perfectly functional couple?) There is, however, a difference between normal arguments, which can be resolved by the two participants in the relationship, and situations where a third party could be useful. Yep, we're talking about relationship counseling now. No, you are not allowed to count your mother, your dog, or that one waitress who tried to mediate that time when you two were bickering about pie in that restaurant as a "therapist." I'm talking about situations that would benefit from the help of a trained professional.

Sometimes the issues that lead couples to therapy are small, like a regular household argument that nobody seems to be able to resolve; seeking therapy as a couple doesn't mean that you've ruined your relationship and the end is near. But entering couples counseling can be tricky and emotionally complex. Revealingly, the therapist Andrew Marshall explained to The Guardian that "in my experience people find it harder to start couple counseling than individual therapy," precisely because there's already an opponent present, "ready to disagree, and possibly to rubbish your opinions." For that reason, it can be a delicate and vulnerable experience, and it's completely understandable to want to shy away from it, particularly if you're ashamed of the fact that your relationship isn't picture perfect. Letting a stranger into your intimate duo may seem invasive or an admission of failure, or you may be afraid of dealing with the totally unfair stigma that going to relationship counseling holds in our culture. But there are certain circumstances in which it could do real good.

Here are seven circumstances in which a relationship could really benefit from both people entering into therapy together. Take a deep breath.

Relationships need communication. Actual communication — not just asking each other where the remote is and whether you should watch Netflix or do the laundry. If you feel a complete lack of inclination to talk to one another, in general or about a specific issue, for any reason — you're afraid, embarrassed, fighting constantly, worried it will blow into an argument, bored of discussion, or feel you don't have anything to say — it's a good time to get a counselor. They may be able to break down the wall between you two and get you actually discussing real things again.

2. You Treat Each Other With Contempt

Contempt — an attitude of complete disrespect towards another person, to the point of actual disgust — is one of the most destructive emotional responses in any relationship. Psychology Today points out that studies indicate a worrying trend when contempt creeps into a relationship: the presence of contempt in the interactions between a couple spells a very high probability of a break-up, even among married couples. If you are contemptuous or disdainful of your partner or some aspect of their life, you have clearly stopped valuing their feelings or appreciating their particular perspective. It indicates the opposite of empathy, and is a sign of a very serious relationship breakdown — and thus a very strong indicator that you two could benefit from a professional's perspective.

3. You're Acting Passive-Aggressive To Each Other

Passive aggression is the devil. OK, it's not that bad, but it's a massive obstacle to a serious and lasting relationship. Whether the person expressing their aggression passively is trying very hard to conceal it because they think they're being unreasonable, want somebody to ask them what's wrong, or simply are unable to express their anger in a healthy way, hearing the word "FINE" delivered from behind a slammed door over and over again is going to drive any person mad. If you can't talk about what's pissing you off, you're not going to get anywhere. A therapist might be able to get the "passive" out of the equation and let you really let rip, which is more helpful than it seems.

4. Resentment Is Bubbling Towards The Surface

Long-term relationships often involve sacrifice from both partners, whether it's on the issue of jobs, childcare, location, lifestyle or any other topic you care to name. Hell, you could have to sacrifice your dream of having a goldfish to keep the relationship alive. Whatever it is, if this situation is actively causing either of you to resent the other, it's likely going to be helpful to get a third party to mediate and help express those feelings. The Counseling Directory actually calls resentment "the cancer in relationships", so please take it seriously and reach out to a professional.

5. You're Unable To Compromise On A Key Issue

Even if you and your partner are delighted with each other and regularly make smoochy noises on the train, relationships can reach deadlock when neither party is prepared to give ground beyond a certain point on an issue. This doesn't necessarily mean that either of you is being pig-headed; if one of you really doesn't want to have kids and the other really does, for instance, no one is right or wrong; it's a matter of personal preferences clashing. If you think you're both stuck, though, you should seek help — and not just because you think it might make the other person change their mind. Ultimately, counseling may not be able to save the relationship, but it could offer new ways to approach the issue and discuss it without misery or running into the same walls over and over again.

6. You Keep Returning To Arguments Without Resolving Them

Psych Central's Dr. Donna White calls this particular reason for attending couples counseling the “we know what’s wrong but we just don’t know how to fix it" issue. Knowing how to argue and put the issues on the table is one thing; but actually being able to move towards an effective solution may be impossible for the two people caught in the heat of an argument. If you have the same arguments over and over again without ever moving forward, it's a good sign that an external mediator may be a good asset, as they can offer a different skill set to try and address what's going on, including why you can't solve this problem.

7. You've Begun To Think Of Leaving

Crisis alert. The Huffington Post's guide to marriage counseling describes fantasizing about leaving — whether you dream of pursuing an affair or just being without your partner — as "a signal that you desire something different from what you currently have," and that's a flashing red light that something is being unfulfilled or unaddressed in your relationship. If you do actually want to save the relationship, rather than just cutting and running, you could try counseling as part of an attempt to try every approach to sorting things out before packing your bags. (Note: If you don't want to save your relationship, chances are that counseling will not help you be convinced otherwise.)