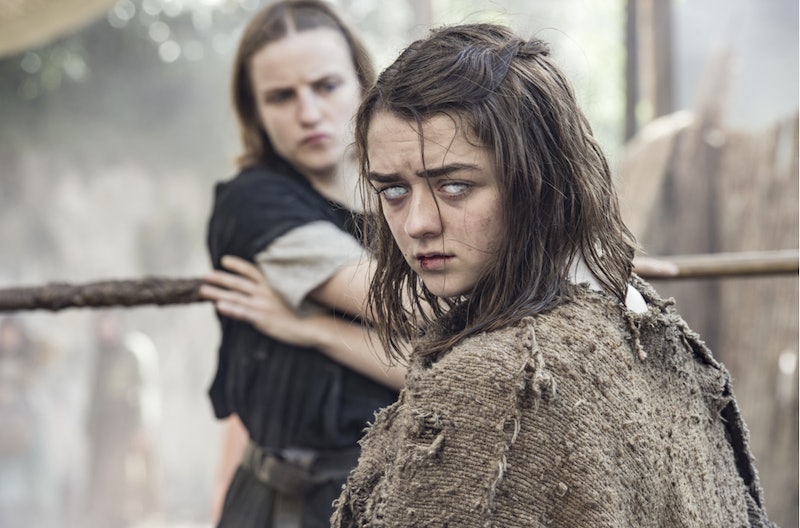 Maisie Williams, the actress who plays Arya Stark on Game of Thrones, loves to give fans maddening teensy weensy hints about her character's role (and also the life and death of Jon Snow) in Season 6 of the hit fantasy series. As much as I lap every bit of it up like a direwolf sucking the blood of a Lannister, sometimes it feels like Williams is just doing her darndest to give me serious GoT-style anxiety. This go-round, Williams gave an in-depth summary to People about acting as a blind character and the effect the disability will have on the younger Stark girl. She claimed Arya's blindness will help her on Game of Thrones, and that she will use her now-heightened senses to her advantage. But what could Williams mean by this?

Poor Arya, kicked out from the house of Black and White, stuck begging in the streets. She was the daughter of a lord and lived in a castle, and now nobody wants her. And with members of the Stark family dying every season, the outlook doesn't look good for her. Even though, in the People interview, Williams says, "Arya gets beaten up this year. I guess I learned a lot in that sense in getting fake hit," I have faith that the scrappiest Stark can take it. But what exactly does Williams mean when she says, "She's learning to fight without her eyesight. It's definitely a skill she will take with her forever, using her ears and not her eyes. That's going to be very beneficial and she'll use to her advantage."

My hypothesis is that Arya isn't done with the House of Black and White, but I'm a little worried that the part of her that isn't done is the revenge-y bloodlust-y part. I have a bad feeling that she's gonna go in there like Beyoncé in the video for "Hold Up" and rage kill everybody with a big 'ole smirk on her face. Watch out, Waif, you're definitely going first. I'm still on the fence as to whether or not the House of Black and White and the Faceless God are good, bad, or otherwise. But I'm very sure that, if Arya rampages all over the dimly lit halls, there are going to be some serious consequences. I know "all men die" and all, but I'm not ready for little Arya Stark to go down with them.

Maybe Arya will realize the toll the vengeance game takes, and use her talents to latch onto someone who can help her out on getting back to Westeros. For a space of land that seems pretty large, important characters always seem to run into each other. Maybe Arya can accidentally-on-purpose bump into Littlefinger, and be blind, so he totally won't recognize her, and then find her way back to her sister. I want those Stark girls reunited, and I want Brienne to turn into their mother substitute. Is that so wrong? Who could say no to Brienne of Tarth's Fund For Orphaned Kids?

Arya's story will continue being rolled out Sunday, May 1, in an episode title "Homeward Bound." Let's all collectively hope that Arya isn't going to go all "I do have a particular set of skills" on the House of Black and White. Because, maybe, just maybe, if we wish hard enough, the wish will come true.