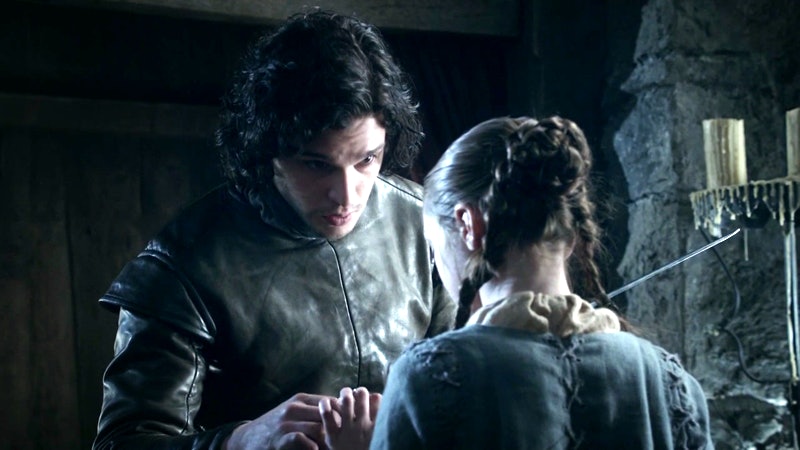 Maisie Williams, the actress who plays Arya Stark in Game of Thrones is not only a talented actress but was once also one of the biggest proponents of "JON SNOW IS DEAD AND SO ARE ALL YOUR DREAMS AND HAPPINESS." But now Williams is changing her tune about Jon Snow's fate in the coyest way possible. On the red carpet at the London Film Critics’ Circle Awards, the teenage actress let slide, "I feel so mean because I speak to people and they’re all like 'Jon Snow, is he back?' and it’s like really heartbreaking because people are like 'yeah, but he’s coming back though?' It’s a great twist, but I can’t say he’s going to be alive."

Curse you, Arya! A hint, but not hint enough, just to toy with our fragile Game of Thrones emotions. Haven't you people already put us through enough? How can he be back, but not alive? I mean, there are ideas, but none of them seem that promising for Jon Snow's mortal soul. Let's look at the facts and get to the bottom of this cryptic hint, using some theories pulled from the Internet about Jon Snow's ultimate fate. Warning: some are more heartbreaking than others.

1. Jon Snow Is Only Back In Flashbacks Or Dreams

This one hurts me, but it's possible. Right? He could be leading armies in someone's dreams. It would be the perfect way for the TV powers that be to mess with us. (He'll definitely be in my dreams, at least.)

2. He Will Be Brought Back By Melisandre

This little hint from HBO UK also fuels this guy. It is in references to a speech Daenerys gave to Tyrion, in which she insists:

“Targaryen. Lannister. Baratheon. Starks. Tyrell. They’re all just spokes on a wheel. This one’s on top, then that one’s on top, and on and on it spins, crushing those on the ground. I’m not going to stop the wheel. I’m going to break the wheel."

The idea is that Jon Snow is the blood in the snow, and he is, therefore, royal in some way (either Targaryen or Stark blood). And Melisandre loves bringing royalty back. It's a stretch, but this series is a fantasy, so the whole thing is stretch. I'll take it.

The Night's King has a thing for Jon Snow. Who's to say he doesn't want to make him his son or second-in-command or love slave or whatever White Walkers do? I don't judge, particularly because they are so scary.

4. Bran Is Going To Warg Into Jon Snow

So we still get to look at Jon Snow and hear a voice that sounds like him, but it won't be the same Jon Snow. It will just be Bran pretending to be Jon Snow, as he did with Hodor. I'm not the biggest fan of this option. A Kit Harrington shell just doesn't do it for me.

5. Olly Had A Change Of Heart

Sure, it sure looked like there was a lot of blood, but, maybe after delivering the fatal blow, Olly, Jon's attendant, changed his sweet little mind and decided to mop his former boss up. There wasn't that much blood. This theory is almost more of a stretch than Melisandre helping out.

People are hopeful that the reason Lady Stoneheart (potentially resurrected Catelyn Stark in the books) hasn't been introduced is because the showrunners were waiting until Jon was dead. Then they could be resurrected together like the best buds they are.

7. This Doesn't Really Mean Anything

Williams' hint is just vague enough to not really be a hint at all. My brain hurts.

We can hope and pray and look into hints 'til the White Walkers invade the North, but that won't change what's already set to go down in Season 6 of Game of Thrones. The only thing we can do is wait until April 24, and try to think about less stressful things, like tax day (April 15th is coming!).