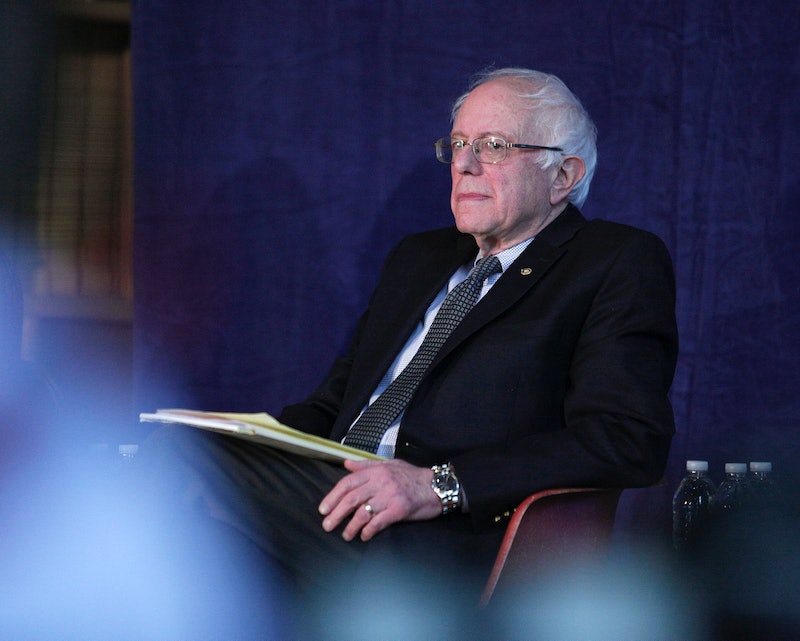 Big delegate numbers were at stake on Tuesday, as five states held their primaries: Pennsylvania, Connecticut, Rhode Island, Delaware, and Maryland. On the Democratic side, the question was how much Sec. Hillary Clinton's lead over Sen. Bernie Sanders would increase by, as polling up to the primaries indicated that she was likely to win most of Tuesday's states. But, because Democratic delegates are awarded proportionally, both candidates are walking away from Tuesday with more delegates than they came in with. How many delegates did Sanders get on Tuesday? Not all delegate counts were in at the end of Tuesday night, but at the time of this writing, Sanders gained at least 129 delegates, according to Associated Press.

Going into Tuesday, Sanders had 1,202 delegates, according to The New York Times, and Clinton had 1,446, separating the candidates by 244 delegates. By the end of Tuesday night, Clinton had picked up at least 194 delegates. Overall, there were 384 pledged delegates at stake in the five April 26 states. Sanders needs all the delegates he can get to prevent Clinton's lead from expanding beyond the point of no reversal. On Tuesday, the Democratic Party's proportional allocation method was crucial toward this goal, since he performed fairly well in several of the contests.

The following are the numbers of delegates Sanders snagged from each state as of the end of Tuesday night, according to Associated Press:

Sanders' worst races with Clinton on Tuesday were in Maryland and Delaware, where he lost by about 30 percent and 20 percent respectively, The Guardian reported. He lost by a smaller margin of 13 percent in Pennsylvania. Sanders beat Clinton in Rhode Island by 12 percent, and narrowly lost in Connecticut by about 4 percent.

These results are pretty much in line with what polls suggested would take place; candidates won where they were expected to, though by greater margins than projected. Only two recent polls were conducted in Rhode Island, yielding an average 2.5 percent lead for Clinton in the state, reported Real Clear Politics; however, FiveThirtyEight projected that Sanders had a 58 percent chance of winning the state, since it deemed the poll showing Sanders ahead to be of higher quality than the other one. Clinton has held steady leads in the teens and 20's in polls from Pennsylvania and Maryland, respectively, according to Real Clear Politics. Polls from Connecticut suggested a close race, with Clinton narrowly leading by about five points. Insufficient polling was available for Delaware.

It wasn't the best night for Sanders' mission of narrowing, and ultimately overcoming, Clinton's lead. But it's not over yet. In May and June, there are still 1,016 pledged delegates to compete for. It won't be an easy path ahead for the Vermont senator, but it's too early to call the race yet.