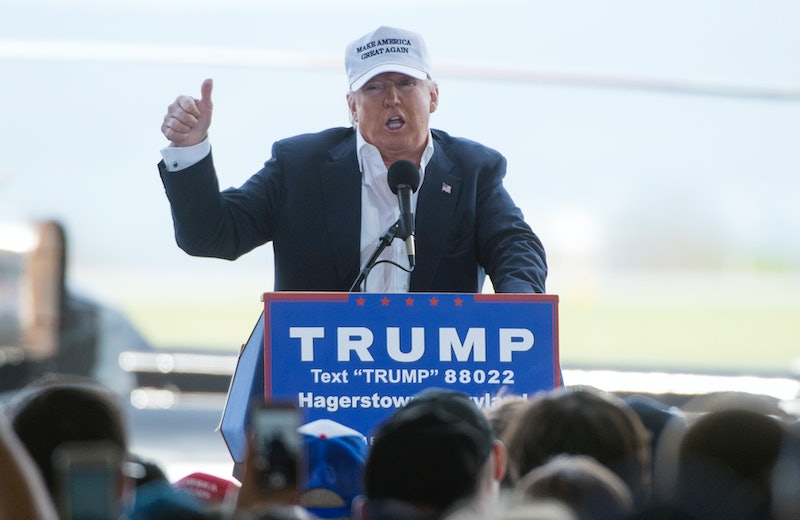 In Tuesday's "Acela primary," Connecticut, Delaware, Maryland, Pennsylvania, and Rhode Island voters took to the polls for a say in who will become the 2016 presidential nominees. The day was critical for both parties, but Donald Trump needed big victories in order to prevent a contested Republican convention this summer. So, how many delegates did Trump win on Super Tuesday?

Before April 26, Trump led the GOP pack with 844 delegates, still needing 393 to secure his place on the ballot in November. Ted Cruz and John Kasich teamed up in the week before the primaries in an attempt to stop Trump from reaching the 1,237 delegates required to win the nomination, and it didn't work. Both campaigns announced Sunday that they would focus their efforts on specific primaries and not campaign in other states, basically dividing up which states Cruz would take and which ones Kasich would have. While their plans looked more to future primaries in Indiana, New Mexico, and Oregon, the two Republicans have each been attempting to keep Trump out of the White House since the race began, and it's not paying off.

Trump ended the night with at least 105 total delegates from all five states, compared to Cruz's one and Kasich's five.

Although he still hasn't reached the necessary 1,237 delegates, he's much closer with a total of 950. His five for five win makes it increasingly less likely that the Republican convention will be contested, as Cruz and Kasich hardly competed in the Northeastern states. There were a lot of unbound delegates elected Tuesday who can vote for whichever GOP candidate they want — especially in Pennsylvania — but Trump could reach 1,237 without their help at this point, as there are more than 500 delegates remaining. However, in his victory speech Tuesday night, Trump said the uncommitted delegates have a "moral obligation" to vote for him at the convention because he won by such high margins.

Following his major New York victory with five more East Coast states gave Trump a big boost in the race for the nomination and to his ego, which didn't particularly need a boost.