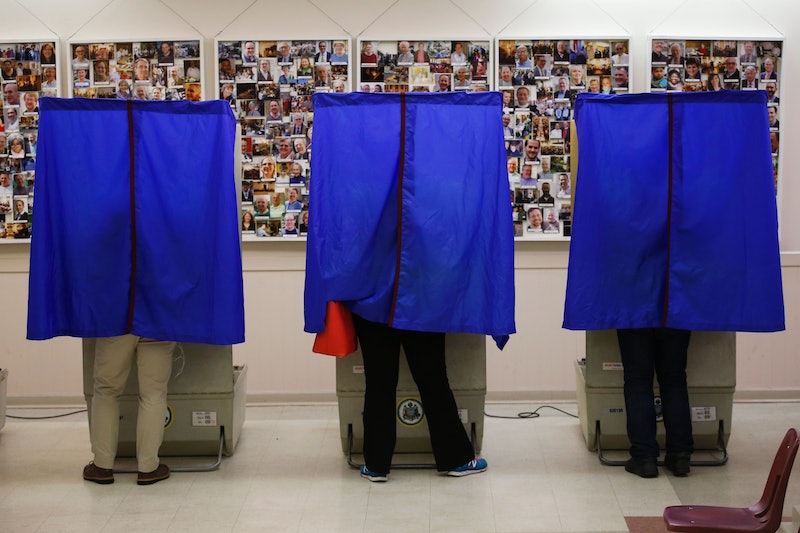 The Keystone State finally had the chance to vote in the 2016 presidential primaries on Tuesday, making up the "Acela primaries" with Maryland, Connecticut, Delaware, and Rhode Island, which all took to the polls. With 71 GOP delegates and 189 Democratic delegates up for grabs in an unorthodox allocation system, the state election was vital in determining whether or not the GOP will have a contested convention this summer. Because of the importance surrounding the primary and the high emotions surrounding this election nationwide, voter turnout in the Pennsylvania primary was extremely high, as expected.

The 2008 Pennsylvania primary drew a record number of voters — a whopping 42.7 percent of voters, the highest turnout since 1992. With the exception of that year, the state usually sees between 20 and 24 percent of voters at the primary polls. Like 2008, the 2016 race is extremely controversial and has caught the attention of Americans who normally wouldn't bother casting a primary ballot. This year, at least 31 percent of Pennsylvania voters participated in the GOP and Democratic primaries, falling slightly below the iconic 2008 numbers.

Despite so many people casting a ballot for the candidate of their choice, only 17 of the 71 delegates were awarded to the GOP winner. The remaining 54 are unbound, meaning they aren't committed to a Republican candidate despite Pennsylvania constituents choosing them to represent their congressional district at the convention.

Unlike the Democratic ballot that listed whether potential delegates supported Hillary Clinton or Bernie Sanders, delegates on the GOP ballot had no indicator about whether they favored Donald Trump, Ted Cruz, or John Kasich. This method made it extremely difficult for voters — especially those who didn't take the time to research each person's views beforehand — to choose delegates who aligned with their beliefs.

Because Trump still hasn't reached the needed 1,237 delegates to secure the Republican nomination, Pennsylvania's 54 uncommitted delegates could become a crucial deciding factor. If the GOP frontrunner is just short of the magic number before the Republican convention, those 54 people will be endlessly lobbied by both Trump's campaign and the Never Trump camp to get the delegates on their respective sides, as their unbound votes could sway the vote either way.

Regardless, the hundreds of thousands of Pennsylvania voters who showed up at polls throughout the state were enthusiastic about utilizing their right to vote and made it clear who they want to see in the general election in November.