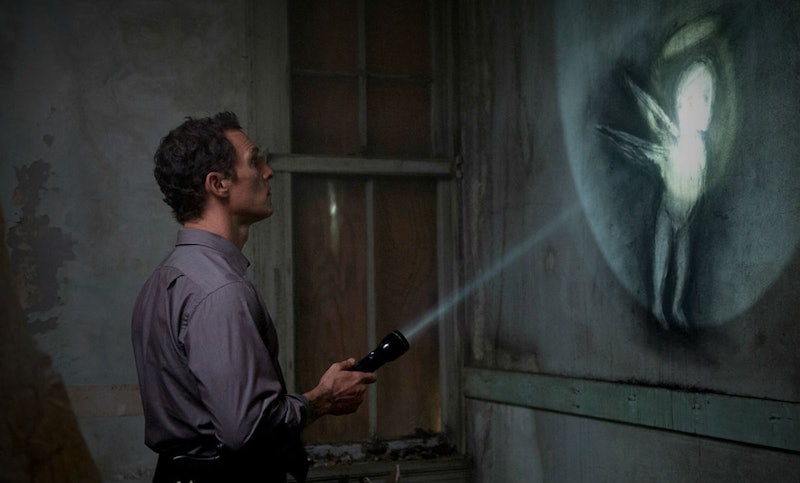 Throughout the first few episodes of True Detective , Detective Rust Cohle has appeared slightly guilty. From his incredible intuition while solving the Dora Lange murder to the primitive dolls he makes out of Lone Star cans during his “consultation” in 2012, Rust has given the present day detectives plenty of ammunition for thinking he’s the real murderer. Of course, it wasn’t until this week that the duo actually came out with their theory as to how Rust did it.

But with three episodes left, it seems pretty unlikely that the truth is that simple. The series hasn’t exactly been subtle about wanting us to think Rust might be the killer. Sure, things backed off a bit last week when we were focused on the high-gear teaming up of Marty and Rust on a secret mission to infiltrate a biker gang, but that didn’t erase the three other hours of television in which Rust’s eccentricities have been on trial.

Last week was a deflection, because it seemed that Rust might just have his outlook on life because he lost his wife and daughter and because he’d been under cover in a biker gang for years. But this week, everything changes when even the most fearsome biker — the one Ginger warned Rust about last week – looks at Rust and tells him his soul is corrosive. “There’s a shadow on you,” he growls.

Hell, if that scoundrel thinks there’s something wrong with Rust, shouldn’t we be seeing the same thing? Sure. Only it’s not that simple or that easy.

After Rust loses his deal with the biker, he meets up with Marty, who’s located Ledoux. Naturally, they go into find Ledoux together, but opt not to call in backup until they know where exactly the suspected murderer is hiding. Using Rust’s hunting and tracking skills, they avoid numerous booby traps along the way and come to the compound where Ledoux and his buddy cook and live.

While the voice over tells us that Marty and Rust were spotted immediately and pinned down in a wave of gunfire and thus forced to skip calling the department and take out both La Deux and his buddy, we see that in reality, the partners simply chose to approach the compound on their own. They snuck up to the house, found Ledoux and arrested him while he muttered “Black stars rise” over and over. With him detained, Marty searched the compound and found two children in a storage shed — both of whom were missing from their homes. Furious, Marty storms right out and shoots Ledoux in the head.

This prompts Ledoux's buddy to run and Rust shoots him and he explodes. And just like that, these two have some killing to cover up. So Rust shoots up the compound with one of the criminal’s guns and they tell the department that they were in a shootout and forced to kill or be killed. The department considers the Dora Lange murder solved, Marty is a hero, and Rust is his courageous right hand.

Of course, the Dora Lange mystery isn’t exactly the center of the series. While it may be the line along which the story has continued, it’s merely a piece of the greater puzzle. So we take a further walk down memory lane, where we learn about what happened after the murder was “solved.”

Marty got a second change with Maggie, who was still considered that he wasn’t a good person any more but was willing to listen. They reconciled and even went back to setting Rust up with their friends, one of whom actually sticks around as his girlfriend. Marty’s daughters grow up and the troubled one, Audrey, becomes a reckless teenager who gets caught having sex with two older guys in a car. Marty’s anger is ignited again and he threatens to charge the boys, who were 18 and 19, with statutory rape and calls his daughter “captain of the varsity slut squad.” Wonderful parenting technique there, chief.

Of course, the part of the past the present day detectives are most concerned about is Rust’s new position as the go-to detective for confessions. He was called in sometime in 2002 to get a murderer to confess, but when he did, the murderer said he wanted a deal because he knew about the Dora Lange murder. Rust shakes it off until he says the name “The Yellow King,” which is a name they came across during the Dora investigation. Rust loses it, grabs the murderer, and has to be pulled out of the room. A few days later, the man commits suicide in his cell right after taking a call with his lawyer.

Again, Rust is convinced that the suicide isn’t as simple as it seems — the detectives think the guy was just disturbed. He follows the phone number of the man’s supposed lawyer out to the middle of nowhere and connects the dots for the dumbfounded detectives: whoever was on the phone told the murderer something that gave him no choice but to kill himself.

It’s apparently this detail that acts as the lynchpin for the present day detectives’ theory that Rust is actually the murderer. But it doesn’t quite add up.

After Rust goes on one of his signature tangents about “time is a flat circle” and how if we could see things from the fourth dimension, we’d have great clarity about how circular it all is, the detectives lay their theory on both Rust and Marty.

They say his stories don’t add up — and sure, they don’t because they were covering up the unsanctioned undercover work they did. Then they point out that Rust has a storage shed he won’t let them inspect — he does and he’s standing his ground on that one. They then add that Rust has returned to drinking recently and that he won’t tell them what he’s been up to recently, suggesting that he’s perhaps experienced black outs. We have no way of knowing the truth behind that, but it certainly can’t help. Besides all that, they have witnesses and photos that place Rust at the murder scene five times before the murder took place. They think they’ve got him.

They think that Rust is the murderer and that he led the investigation toward Ledoux to settle some old dispute with the Ledoux family. They’re certain of this — so certain they even start to get Marty to question his old partner after he’d just defended him so resolutely. Even worse, when they inform Rust, he storms out and tells them they’ll need a warrant to search his storage unit. But something doesn’t quite add up.

First, while a voice over of the detectives accusing Rust plays, we see a flashback to Rust visiting spots from the Dora Lange investigation. He visits Dora’s final resting place and then goes to the school where Ledoux's first victim once went. There, he finds more twig structures, including one he holds up, with rubber gloves on his hands, to the light to get a better look at it. It’s a very dark, sinister scene, but it doesn’t suggest that Rust is the killer.

Most obviously, Rust being the killer would be a boring outcome. The series has been hinting at it with the subtlety of a baseball bat over the head since episode one. Secondly, when Rust and Marty were first investigation Ledoux, they learned that there was a cult of old white men, all with the swirl tattoo and all of whom were killing people. So this mystery is much bigger than just Ledoux. Third, Rust is investigating the twig structures with gloves on — if they were his handiwork, he wouldn’t need to sift through them with gloves on.

Yes, it’s strange that he was at the murder site many times before the murder occurred, but it seems more likely that Rust – shown the rigid structures of the police department and its rules — already found success by subverting those structures once when he and Marty took down Ledoux. Is it so impossible that now his shifty movements and secret storage locker are filled with material integral to a 17-year-long investigation of a cult of men who kill and sacrifice women? Or something even worse?

Or are we really going to believe that HBO is okay with letting the next three whole episodes be about how Rust is the murderer and didn’t you see it coming already, dummies? Yeah right.