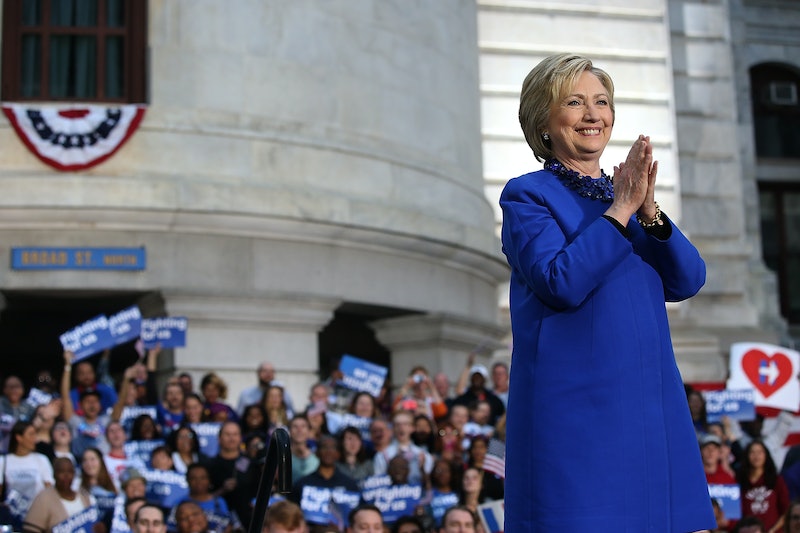 While speaking about her primary victories Tuesday night in Philadelphia, Hillary Clinton played up her feminist agenda on women's issues. Clinton's previously been accused of using the "woman card" in the 2016 election, and now she isn't afraid to admit it. "If fighting for women's healthcare and paid family leave and equal pay is playing the 'woman card,' then deal me in," she said enthusiastically after it was confirmed that she won the Pennsylvania Democratic primary.

Clinton's witty statement was so perfect, not only because of the play on words, but also because it highlighted that she won't apologize for being a woman or fighting for women's rights. Back in December, Donald Trump insinuated that Clinton was trying to use her gender to gain women's votes and accuse her opponents of having anti-women policy plans, saying on Fox News: "She's playing that woman's card left and right, and women are more upset about it than anybody else, including most men."

Though months later, Clinton's response to that comment proved that the "woman card" isn't a negative thing — she plans to stand by her commitment to improve the lives of women and won't let her critics belittle her agenda because of her gender.

The fact of the matter is, no one ever accuses male candidates of playing the "man card." Clinton's plans to make the U.S. more gender equal aren't a card she's playing so much as a political agenda — you know, the things presidential candidates usually come up with. However, if that's the analogy that's sticking, she wants to be at the poker table.

Clinton is no stranger to powerful statements, and she outshone every other presidential candidate Tuesday night by playing to her strengths. When placed side by side any of the three remaining GOP candidates, her stances on women's issues are far more comprehensive and holistic, especially since Donald Trump, Ted Cruz, and John Kasich don't have any plans to close the wage gap or increase women's access to health care.

Regardless, Trump said in his victory speech Tuesday night: "I'll do far more for women than Hillary Clinton will ever do." It almost sounds like he's trying to play the woman card himself, though he hasn't asked to be dealt in like Clinton did.