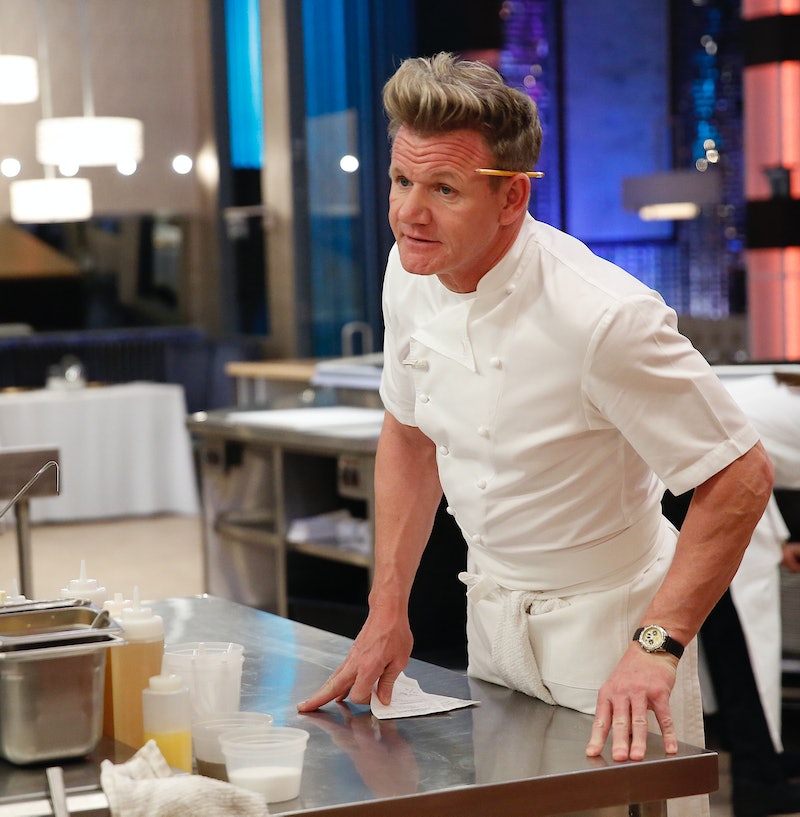 If you can't handle the heated drama of Hell's Kitchen, then you're probably going to have a hard time watching all of the ups and downs that are sure to come with Friday night's Season 15 finale. But then you won't be able to see which finalist, Kristin Barone or Ariel Malone, Gordon Ramsay gives the top prize of working as the head chef of a premier restaurant to, and is that something you really want to miss? Well, whether or not you watch the season's finale, you're still probably going to wonder when Hell's Kitchen will return for Season 16.

The good news is that we know there's definitely going to be a Season 16 of Hell's Kitchen. FOX announced it had renewed Hell's Kitchen for a 15th and 16th season before Season 14 premiered on March 3, 2015.

Unfortunately, FOX has yet to announce an official premiere date for Season 16 of Hell's Kitchen, but that is to be expected when Season 15 hasn't even finished yet. Apparently we cannot have our Season 16 renewal news and eat it, too.

To make matters worse, there's almost no point in trying to predict when Season 16 of Hell's Kitchen will premiere, either. The culinary competition's season premiere dates have been all over the place over the past 15 seasons, according to TV Guide. But since only one season of Hell's Kitchen usually airs a year, it seems likely that we'll be able to watch new episodes of the series once again sometime in 2017.

So that's not great to hear, but there is a silver lining to this situation. If you just like watching Ramsay yell at people and swear a bunch, you're in luck. You can experience his fury (and occasional fun!) in a lot of ways while you wait for Hell's Kitchen to return.

If you're a fan of Ramsay's, you're probably well aware that Hell's Kitchen is just one of several reality shows he hosts on FOX. Hotel Hell is another, and it's starting its new season on Tuesday, May 17. Hotel Hell is basically like Kitchen Nightmares, except instead of swooping in and fixing restaurants, Ramsay ihelps hotel owners get their establishments back on track. Seeing the stained mattresses and moldy bathrooms that exist in real hotels across America is pretty nasty, but watching the famously ornery Ramsay tasked with dealing with all of that will probably put a smile on your face.

Another one of Ramsay's culinary competitons, MasterChef, is back on FOX for Season 7 on Wednesday, June 1. We'll see 40 new home cooks compete for the title of MasterChef, a cookbook deal, and a $250,000 grand prize, according to a press release about the new season. Ramsay and pastry chef Christina Tosi will be joined by some very impressive guest judges from the culinary world, including Wolfgang Puck, Aaron Sanchez, Edward Lee, Kevin Sbraga, and Richard Blais. It's sure to be one wild, mouthwatering ride.

If you like your Ramsay in smaller portions, you can always check out the chef's YouTube channel, which is updated regularly with video recipes, cooking tips, and throwback clips from his past British series, including The F Word and Gordon Behind Bars. Sometimes watching a little bit of the foul-mouthed Brit is all you need to get you through the day.

Soon you'll be able to have Ramsay in the palm of your hand — literally. The chef announced his partnership with Glu Mobile to launch his very own mobile game in January, Variety reported. It sounds like the game will involve the user running a restaurant with Ramsay serving as mentor and probably cursing up a storm, according to a report published by VentureBeat in March. Just because I can't cook in real life doesn't mean I can't be a virtual food star!

Matilda and the Ramsay Bunch

Even little Ramsays are getting into show biz these days. Ramsay's 14-year-old daughter Matilda scored her own cooking show called Matilda and the Ramsay Bunch on the BBC's children's network CBBC in 2015, and it returns on Friday, May 6, according to The Daily Mail. Her dad, mom, and siblings have all made appearances on the show, and you'll definitely see another side of the hardboiled chef if you're able to catch it.

There Are More Ramsay-Approved TV Shows In The Works

So clearly I've established that Ramsay is all over your TV, computer, and mobile device screens. But get ready for Ramsay to be even more all up in your entertainment in the future. The chef just announced the launch of his own independent production company Studio Ramsay on Tuesday, which he will use "to create new unscripted formats and develop new talent" as well as "have a scripted arm focused on programming with food-related themes," Deadline reported.

More like this
'Who Killed Sara?' Won’t Return For Season 4
By Brad Witter
What’s New On Netflix: A Victoria Justice Rom-Com & The Return Of David Letterman
By Arya Roshanian
What’s New On Netflix: The Return Of 'Bling Empire' & A Rebel Wilson Comedy
By Arya Roshanian
8 'Selling Sunset' Continuity Errors You Definitely Won't Be Able To Unsee
By Rachel Mantock
Get Even More From Bustle — Sign Up For The Newsletter