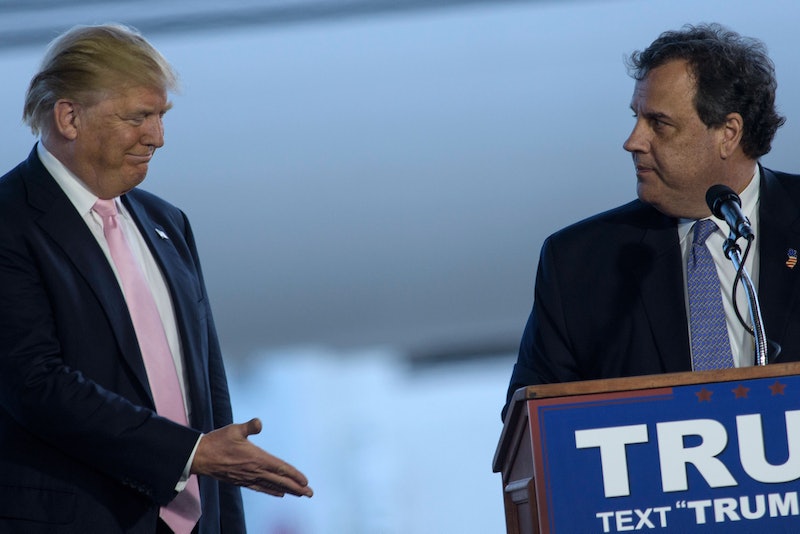 On Tuesday, television viewers were treated to a familiar sight: Chris Christie standing behind Donald Trump at a victory speech, nodding obsequiously and looking forlorn. Trump was celebrating his strong performance in Tuesday's primaries, and he trotted out Christie, who's emerged as a key Trump surrogate/bootlicker, to accompany him on stage. This was, of course, the second time Christie came off looking like Trump's hostage at a press conference, and it was no less delightful than the first time.

Back in March, Trump gave a victory speech after winning a slew of states on Super Tuesday. The content of his speech, however, was quickly overshadowed by the presence of Christie, who had recently dropped out of the race and endorsed Trump. Christie, standing silently in the background as Trump spoke, wore an expression on his face that suggested regret, despair, and somber self-reflection at what his life had become since endorsing Trump.

That incident produced plenty of quality Internet commentary, and it was no different this time around. At Trump's Tuesday speech, Christie more or less pulled the same face, and he looked no more happy than this time than he did on that fateful night in March.

Of course, nobody can actually know what's going through Christie's head as he dutifully plays the role of Trump's sidekick, but he really does look miserable when doing it.

It's been a precipitous fall from grace for Christie. After being elected resoundingly to a second term as New Jersey's governor in 2013, he was widely regarded as a frontrunner for his party's nomination in 2016. But it was all downhill from there: Christie quickly became embroiled in the Bridgegate scandal, which hurt him significantly in his home state, and his presidential hopes were almost completely dashed the moment Trump entered the race. Christie had attempted to position himself as the brash tough-talker in the race, but as soon as Trump came along, the New Jersey governor looked positively quaint by comparison.

By February, Christie's presidential campaign had collapsed, and so had his approval ratings in his home state. His political future looked pretty bleak, and in that sense, it was perfectly rational for him to hitch his wagon to the Donald and hope for a cabinet appointment in a Trump administration.

It's too soon to say whether or not this gambit will pay off. In the meantime, though, it's pretty clear that Christie is miserable.