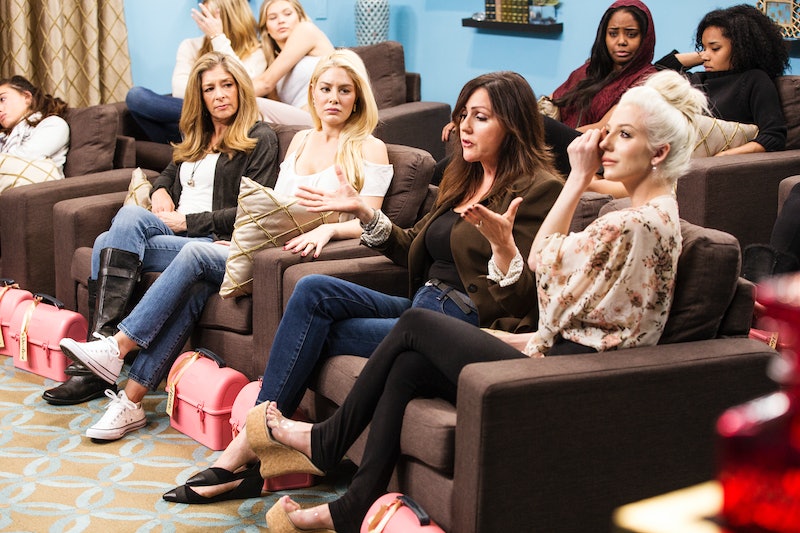 The Mother/Daughter Experiment: Celebrity Edition has been struggling to make its cast of six celebrity mothers and daughters to relate to one another and possibly even repair years of emotional trauma. But, did this series prompt enough breakthroughs that The Mother/Daughter Experiment will get a second season from Lifetime? The show is a bit of a mixed bag. Its ratings have been largely unreported so far, so it's hard to determine how many people are tuning in.

And, when it came to critical reception, E!Online wrote a review that called the show a "hot mess." Personally, I think the show's determination to go to uncomfortable emotional places was somewhat admirable, even if it doesn't really do much that's not already accomplished by the Couple's Therapy with Dr. Jenn's and Celebrity Rehabs of the world.

But, if The Mother/Daughter Experiment is going to return to Lifetime, it will likely be sometime this or next year. It could be anywhere from several months away to a year in the making — Lifetime has certain shows that recur super fast, like Little Women: LA, and some that take a whole year between seasons, like Dance Moms. In the meantime, let's see whether or not the cast of moms and daughters solved their issues over the course of The Mother/Daughter Experiment: Celebrity Edition.

The RHOBH star and her daughter wound up being the cast members with the least amount of issues on this series, and were there for one another at pretty much every step of the way. I think these two are going to be A-OK.

Courtney has probably the most dramatic conflict with her mother — on the show, Courtney discovered that Krista told Courtney's husband she loved him. Given that Courtney became famous for her relationship with a much, much older man, this whole situation was too weird for words. These two couldn't be farther apart, so the MDE can't work miracles.

Back in 2010, Heidi Montag went on a plastic surgery spree, completely changing her appearance. According to both The Mother/Daughter Experiment and an interview with Toofab, that's when Heidi and her mom suffered a "severe break." After appearing on the show, these two are, surprisingly, doing a lot better. Heidi told the Huffington Post, "I think that it really did help my mom and I be able to overcome the past and kind of see each other’s sides, where we were coming from, and be able to move forward in a deeper more meaningful relationship." Maybe I spoke too soon, and this show can work miracles after all.

These two may have argued during the season, but it seems like the tough therapy sessions helped these two to work through their personal issues. If anything, the biggest problems they had during the season were the other members of the cast, especially when Natalie's past on The Bad Girls' Club was brought up.

Just like the Nunns, the Jacksons were reminded about how much they love another by the end of the show.

And, finally, this pair have continued to struggle since appearing on the show. According to TMZ, Josie was arrested in early April and charged with misdemeanor driving while intoxicated, as reported by the Huffington Post. As seen on the show, her mother has been struggling to keep her in check, but over the years, treated her child as more of a friend. I think Jessica and Josie are still working on themselves, but they do clearly care about one another.

So overall The Mother/Daughter Experiment: Celebrity Edition may have been something of a mixed bag, but it actually did wind up helping (or, at least, not totally destroying) the relationships between the titular pairs of mothers and daughters. Maybe that's enough to get it renewed for another season to air next year.

More like this
'Ghost In The Shell: SAC_2045' Was Only Supposed To Last Two Seasons
By Kadin Burnett
'Who Killed Sara?' Won’t Return For Season 4
By Brad Witter
What’s New On Netflix: 'Stranger Things' & 'Somebody Feed Phil' Return
By Arya Roshanian
What’s New On Netflix: A Victoria Justice Rom-Com & The Return Of David Letterman
By Arya Roshanian
Get Even More From Bustle — Sign Up For The Newsletter