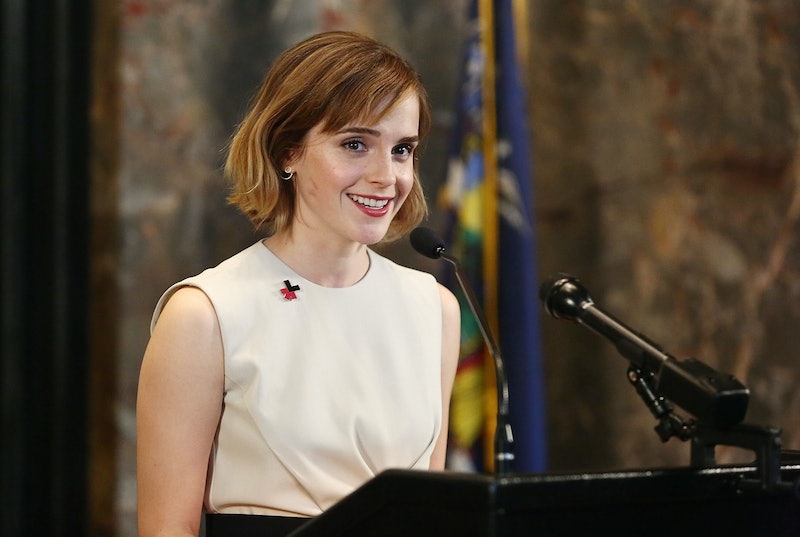 After starting the year off with Gloria Steinem's latest title, Emma Watson's book club will read another memoir in May. Our Shared Shelf has chosen The Argonauts by Maggie Nelson as its fifth monthly selection. Nelson's 2015 memoir follows How to Be a Woman by Caitlin Moran, All About Love: New Visions by bell hooks, The Color Purple by Alice Walker, and My Life on the Road by Steinem.

The story is about the author’s relationship with artist Harry Dodge, who is fluidly gendered. It's about their romance, the birth of their son, the death of Harry’s mother and their changing bodies, as Maggie becomes pregnant and Harry undergoes surgery, but it’s also about inclusion and the powers and shortfalls of language. It might require a bit of work but The Argonauts rewards us with an expansive way of considering identity, caretaking, and freedom — along with a liberation from, what Maggie calls, “the demand that anyone live a life that’s all one thing.”

Watson's book club has come under fire in the past for what many perceive to be a parade of white feminist picks. Personally, I think that's a bit unfair to Watson and Our Shared Shelf. Regarding the January pick, to quote The Mary Sue's Alanna Bennett, "[l]et it not be said that feminist icon Gloria Steinem is complicit in 'white feminism.'" Our Shared Shelf followed My Life on the Road with two excellent selections from prominent womanist and black feminist authors. How to Be a Woman was, arguably, the book club's first and only problematic pick, given Moran's history of transphobic and diet racist comments.

That being said, if there was a single Goodreads group where readers could openly and honestly discuss authors' problematic statements and actions, it's Our Shared Shelf. Watson's book club maintains a level of respect in its discussions that is almost unheard of on the Internet.

And that's not for nothing; Our Shared Shelf's cultural criticism appears to have influenced Watson's selection process. In her May announcement, Watson writes, "I'm really proud of my club members - discussion-wise - you are all hitting it out of the park. I'm having to find books that are accessible, cover multiple perspectives and languages, that are unique and not too well known already."

Watson's talk of "inclusion and the powers and shortfalls of language" isn't just empty banter. She later wonders if reading The Argonauts "will change the way we think and speak about others and ourselves."

Brava, Emma Watson. You really are the brightest witch of your age.