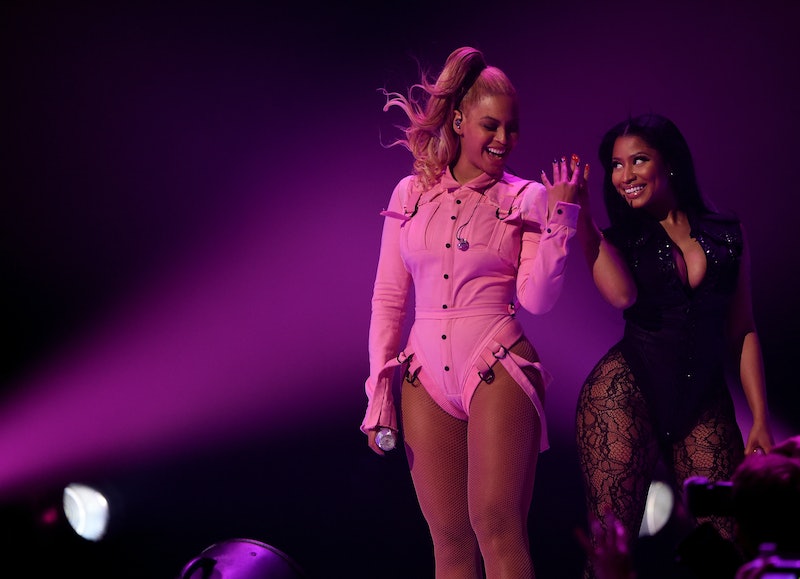 Beyoncé's new album Lemonade is pretty much the only thing the Internet wants to talk about right now, and I am here for it. The overlying arc of Lemonade seems to be about a betrayal, the dissolving of a union, the anger, and then the reconciliation and redemption, all which most fans connected to her marriage with Jay Z. During the final "Redemption" chapter, viewers see intimate clips of Beyoncé and Jay Z's wedding and a scene showing them getting tattoos together. In the past there have been rumors about the confusing status of her ink, so does Beyoncé still have her finger tattoo today?

Some fans might not have even known that Bey even had any tattoos before the scene in Lemonade. But as now evidenced by the clip, Bey and Jay got tattoos on their ring fingers after their wedding on April 4, 2008. The tiny ink is of the Roman numeral for four, IV, which holds a lot of significance for each of them. Jay's birthday is Dec. 4 and Bey's is Sept. 4, while their wedding anniversary is on April 4. The tattoos were done in a brownish red ink, which has more chance of fading and which probably led to the speculation of whether or not Beyoncé removed her finger tattoo or not, but all recent evidence proves that the finger tattoo is still there.

For hardcore fans, the first sign of trouble came after the now infamous elevator fight between Solange Knowles and Jay Z in 2014. A few days following, sources began claiming that Beyoncé was having her wedding tattoo removed, further adding fuel to the fire that their marriage was on the rocks. But as Bustle noted back in 2014, it was possible that the tattoo was simply just fading. I can also attest that tattoos with thinner lines will often blur, and the position of it on her ring finger could have led to further fading from constant friction.

Around that same time, Bey posted a photo on her Tumblr of herself sporting a bandage over her ring finger, which fans took as a sure sign that it was being removed. Honestly, did anyone think that just maybe she was having it retouched?

The couple was rumored to have been going through marriage troubles, but in October 2014 a source claimed to People that Jay and Bey renewed their vows. I admit I don't particularly remember thinking much about her finger tattoo during this time or whether she had it, but in the last few weeks, she hasn't hidden evidence of it.

Just six weeks ago, Beyoncé uploaded a photo to her Instagram (above) showing off her henna, which was presumably for her video shoot for Coldplay's "Hymn for the Weekend."

Her "IV" tattoo is visible, although it is a bit faded. But the most convincing evidence here is that her finger tattoo is in full display during some shots of Beyoncé and Jay Z in Lemonade.

Is this her subtle way of really letting everyone know that her marriage is as good as ever? Leave it to Beyoncé to make the ride mysterious but worth it at the same time.

More like this
Taylor Swift, Kerry Washington & More Speak Out On Uvalde Mass Shooting
By Jake Viswanath
Lily Collins Swears By This Product For Perfectly Air-Dried Hair
By Keely Weiss
Kylie Jenner Just Added 3 New Buys To Her Clean & Clarify Collection
By Tomi Otekunrin
Jennifer Aniston Joked About Ending 'Friends' With Therapy & Divorce
By Grace Wehniainen
Get Even More From Bustle — Sign Up For The Newsletter