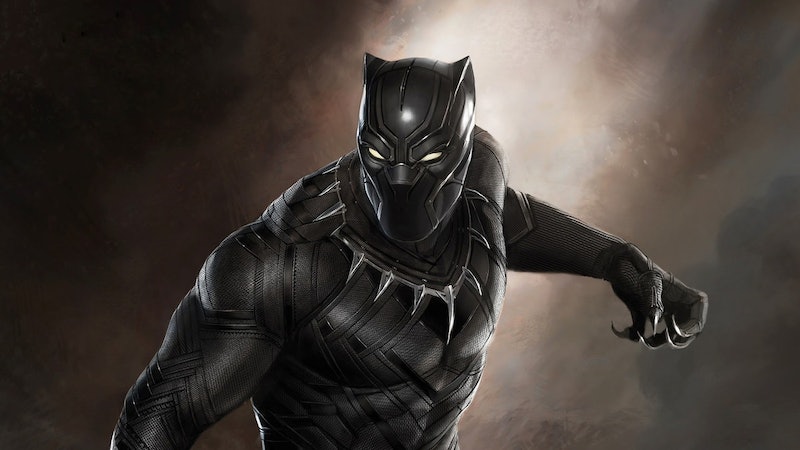 Black Panther is coming, people. Every day that passes brings fans one day closer to Black Panther's big screen debut in Captain America: Civil War. The incredibly buzzed-about hero will be the first black Marvel superhero to headline his own film, and one of only a handful of non-white heroes in the Marvel Cinematic Universe (or any Cinematic Universe, really). And, while he might be getting his Marvel introduction in a Captain America movie, the Black Panther movie is just around the corner, set for release on Feb 16, 2018 (OK, so maybe not that soon). With Marvel's ever expanding, interconnected superhero movie universe, it's worth questioning whether or not Captain America will be in Black Panther and provide yet another star-studded film.

To figure out if Captain America will make an appearance in Black Panther, you first have to understand Black Panther's role in Civil War . Here's what's known about Black Panther in Civil War (no spoilers, I promise): the hero will first appear as T'Challa, Prince of Wakanda, and only later reveal himself to be the Black Panther. He works into the plot on two fronts: as a government agent and as a man with an axe to grind against The Winter Soldier.

His contentious relationship with The Winter Soldier, coupled with the fact that he is briefly seen standing alongside Iron Man in various Civil War trailers, suggests that Black Panther is firmly on Team Iron Man. However, in an interview with IGN, Chadwick Boseman, who plays T'Challa, said that Black Panther might not be as partisan as you might think. "He sees both sides of the coin. He sees both sides. It's necessary to stop crime and to protect your country." So, who knows, by the end of Civil War, Captain America and Black Panther might be allies. And, as we all know, allies frequently cameo in each other's films. It's just common courtesy.

Should Captain America make an appearance in Black Panther, it's unlikely he'd play a huge role. In the grand scheme of things, it wouldn't be wise for Marvel to have a white male superhero as an unofficial second lead in the Black Panther film. It's more likely that Cap would make a small cameo, akin to his fun bit in Thor: The Dark World or his post-credits appearance in Ant-Man , or show up for a slightly longer, but still not major, sequence like the Falcon in Ant-Man.

No doubt the end of Civil War will dictate whether or not Captain America shows up in Black Panther. But, even if something happens that makes it impossible for Cap to be in the film, odds are another hero from the MCU will be. My money's on either Black Widow, Scarlet Witch or Winter Soldier. Marvel's Kevin Feige described Black Panther as a "geo-political action adventure" set in Black Panther's native Wakanda in an Empire interview, and of all the Avengers, Black Widow and Scarlet Witch are the ones with the most familiarity with foreign nations — Black Widow was a freakin' super spy, people. Scarlet Witch also has an added bonus of having few ties to America or the Avengers, so she could easily help Black Panther without bringing in the whole gang. As for Winter Soldier, it's possible that, should he live through Civil War, he might want to right some of his wrongs. What better way to repair his relationship with Black Panther than to help him out in his own movie?

Then again, maybe Black Panther doesn't need anybody other than Black Panther. And there's nothing wrong with that.