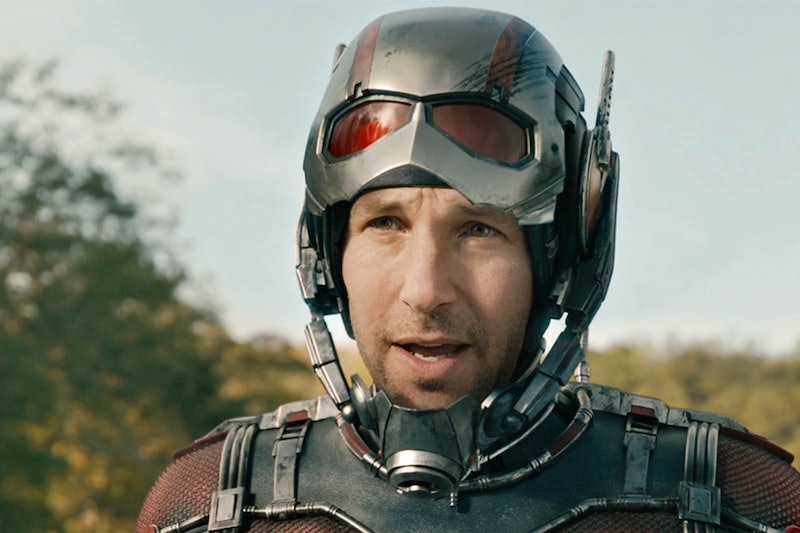 Marvel Studios' Ant-Man looks to be the riskiest venture for the blockbuster factory since Guardians of the Galaxy, which if you recall, turned out just fine. The film's troubled past, little-known protagonist (no pun intended), and curious placement (is this movie phase 2 or phase 3?) haven't inspired a lot of confidence in the film's potential for box office performance. So to boost anticipation among fans for the genre-crossing shrinking/superhero/comedy/heist movie, Marvel has been hinting that Ant-Man just might have some big connections to Marvel's most-lucrative property of all: The Avengers. But just how are The Avengers connected to Ant-Man ?

Fans may not know the specific connections yet, as Marvel hasn't exactly come right out and told us how Ant-Man fits in with the rest of the Marvel Cinematic Universe and The Avengers in particular, but the studio has been leaving some clues here and there for those who know where to look. If you begin to piece those hints together, it definitely looks like the connections between Ant-Man and The Avengers do indeed run deep. To better illustrate my point, here's everything that's known so far about Ant-Man's connections to The Avengers (spoilers ahead):

1. Several Avengers Are In The Movie

One of the newest Avengers, Falcon, appears in Ant-Man. The two heroes engage in a hilarious (for the viewer, not for them) fight when Ant-Man sneaks into Avengers headquarters, and it looks like Falcon could provide the link that connects Ant-Man to the rest of the MCU, and specifically to The Avengers. Later in the movie, Captain America appears as well, albeit for a much smaller amount time.

2. Ant-Man Has A Long MCU History

Making Ant-Man an on-screen hero was apparently an idea for a long time, but fans just didn't know it. In an interview with superherohype.com, Marvel Studios President Kevin Feige discusses the original Ant-Man, Hank Pym (Michael Douglas), and how he connects to the MCU. "We’re going to play on the idea of Hank’s history within the broader mythology of the Cinematic Universe," Feige says. "His time at S.H.I.E.L.D., his interactions with Howard Stark, his adventures as Ant-Man with Wasp in the past that we touch on briefly in the film."

So we know Hank Pym has connections to both S.H.I.E.L.D. and Tony Stark's father, Howard. Anyone else? Yes, as a matter of fact. Agent Carter (Hayley Atwell) herself has a cameo in the film as someone else with whom Hank Pym has worked in the past. Carter helped found S.H.I.E.L.D. and also was the love interest of Captain America, which brings us to...

3. Ant-Man Is In The Next Captain America Movie

Just like almost everyone else in the MCU, Ant-Man will be in Captain America: Civil War next year. His appearance in this film instantly connects him to The Avengers, who are expected to become fractured in the movie. Since Civil War is anticipated to have a lot going on already, I don't see how they're going to have room to bring Ant-Man into the fold (they've already got to figure out how to fit in Black Panther and Spider-Man), so I'm guessing that he'll already be an Avenger by the time this movie comes out. And there may already be proof of this theory.

In the second post-credits scene during Ant-Man, Falcon, and Captain America locate the Winter Soldier. Falcon asks if he should call Tony Stark, to which Captain America replies that he shouldn't. Falcon then tells Cap that he knows a guy, insinuating that our old pal Ant-Man is being called up to the big leagues to join The Avengers! It's not definitive, but it is promising.

Another major connection that can't be ignored is the fact that in the comics, Ant-Man was a founding member of The Avengers. Knowing this, I don't see why Marvel would bother making an Ant-Man film (he's never been particularly popular as a solo character) if the plan wasn't to incorporate him into The Avengers all along. After all, he is one of the team's most-prominent members in the comics. While the movies typically change a lot from the comics, I can't find any reason for them to forego the opportunity to give Ant-Man his rightful spot in The Avengers.