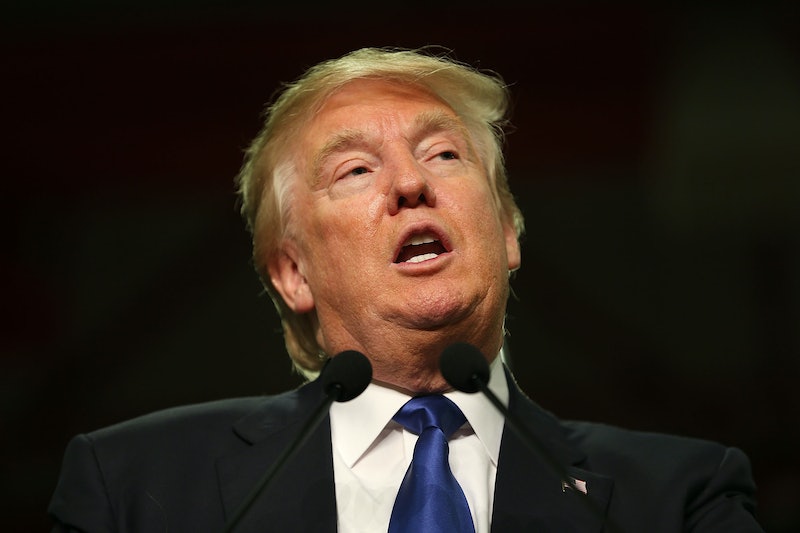 Following a landslide win across all five states that held primaries Tuesday night, Donald Trump has made one thing perfectly clear: He's moving on to setting his sights on Hillary Clinton and the general election. What began with some targeted "woman card" statements during his victory speech (d)evolved into lame comments on Wednesday morning talk shows when Trump said Clinton was "shouting" her message.

I haven’t quite recovered, it’s early in the morning, from her shouting that message. And I know a lot of people would say you can’t say that about a woman because, of course, a woman doesn’t shout, but the way she shouted that message was not — ooh. I just, that’s the way she said it.

It's no surprise that the childish, below-the-belt attacks that we've come to expect from the real estate mogul turned "presumptive nominee" have translated to some problematic ways of dealing with the only prominent female candidate. But who'd have thought we'd be having a conversation about "shouting" and women again so soon?

Yet here we are. Time is a flat circle, and men are terrible. First of all, apparently, any time a woman raises her voice, it can be perceived by sexist folk as shouting, yelling, or nagging. Women generally have very little rhetorical wiggle room if they want to tread the impossible lines of strong, powerful and likable. Likewise, it's obvious that "shouting" itself isn't a problem. Women can and should shout all they want. If a sentiment requires a bit of bluster, anger, or emotion, she should be free to express it just as much as her male counterparts without it automatically being seen as a flaw. Like, come on.

While Trump's decision to zero in on that familiar tone-policing angle is frustrating, to me, it's indicative of a larger trend we're going to see in his campaign. He's not talking to women, and he's not here for women. He's out to appeal to the misogynists and sleeper-cell sexists.

Those comments could just as well have come from any barstool-straddling sexist across the country. It's in the same vein as the oafish sitcom husband griping about a nagging wife. To me, Trump is trying to inspire reactions of the same shrugging, can-you-believe-this-broad variety by playing on tired tropes that demean Clinton into a narrow archetype. Once he draws attention to supposed flaws in the sound of her voice, it's significantly easier to dismiss and silence her. He even has that half-baked acknowledgment of the reprimand built in (the "I know ... a woman doesn't shout" bit) which barely disguises a low-level sexist smear as "telling it like it is." Suddenly, he's cast as the affable everyman forced to listen to a shrill woman and fed up with it — and he's hoping to tap into an audience who identifies with that.

But will it work? A March NBC/WSJ poll found Trump has a 70 percent negative rating with women. But sure, keep complaining about us and our shouty ways, Trump. We'll see who's the loser come November.