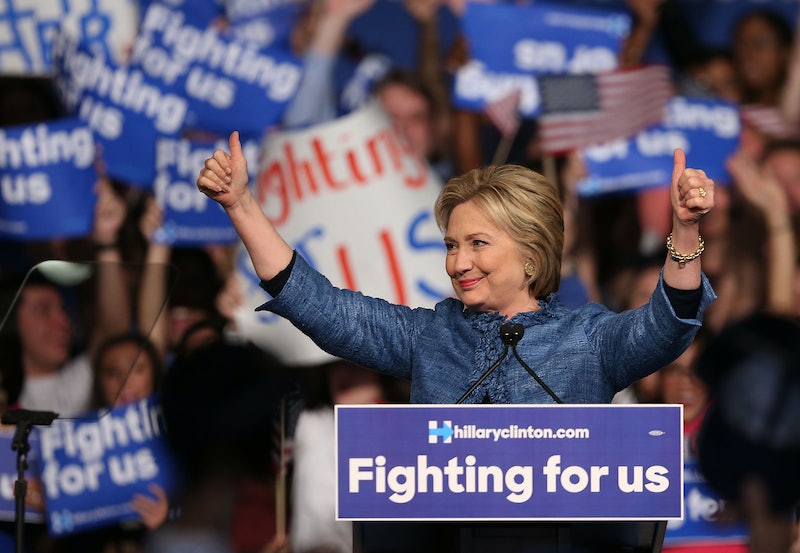 The Democratic front-runner had barely made a dent in her March 15 Super Tuesday victory speech before the dude-bro pundits of Twitter told Hillary Clinton she should "smile" more and quit yelling. You might think Clinton would be immune to mundane realities of everyday sexism after handily winning the majority of states and solidifying her lead in the 2016 primary race. You might think that. But, of course, you would be wrong.

The pundits — MSNBC’s Joe Scarborough and Fox News’ Brit Hume, among others — offered up a classic bit of unsolicited advice (the kind that always seems to be readily available in any chauvinists’ D-bag tool belt) on how Clinton should better move her face muscles to please the masses. Compelled to offer one of the most experienced politicians to seek the presidency in years, they presented some keen political insights such as "don’t sound so angry," "quit shouting," and a friendly reminder to keep smiling. In doing so, these pundits drew some attention to the casual sexism Clinton supporters have been anticipating since the start of this race.

Undoubtedly, these nuanced and thoughtful suggestions will be shared in public speaking classes until the end of time and their bravery for daring to tell a woman how to speak will surely never be forgotten. (Oh, and happy Women’s History Month, by the way!)

You might be wondering why it’s such a big deal — after all, smiling is nice, we all like smiling — and that may be true. But just like you wouldn't want to be told by some random person on the street that you need to smile on demand, the same can be said for women campaigning for public office. (And, generally, unless you’re an employee at a mall photography studio shooting glossy portraits of toddlers, there is no reason for you to tell another person what to do with their face. None.)

Unfortunately, when we’re talking about a woman running for the highest political office, calling for said woman to “smile” or to adjust her communication styles and tone like this represents something far more insidious than this (admittedly annoying) micro-aggression may lead you to believe. Instead, it may forecast the kind of sexism we'll be seeing should Clinton receive the nomination.

It's all about context.

Historically, women have been valued more for their aesthetics: A happy, sunny disposition and a pretty smile made a woman desirable, woman was supposed to lean more towards "comforting" than commanding. Meanwhile, any behaviors that appeared feminine were viewed with contempt as weaknesses. That context, paired with the criticism that Clinton shouldn’t be shouting (while trying to share a triumphant message at a crowded, bustling campaign rally, mind you), highlights the uncomfortable damned-if-you-do, damned-if-you-don't scenarios that women in power face. They'll receive vitriol whether they choose to step outside archaic gender roles or adhere to them.

Meanwhile, their male counterparts who #brand themselves on blustery, no-nonsense, no-frills outsider rhetoric (e.g. Donald Trump or Bernie Sanders) are often celebrated as brave, strong and, of course, presidential because of it. Clinton herself has already spoken out about this double-standard on many occasions during this election cycle, offering a particularly quotable moment in October when she said "when women talk, some people think we're shouting."

Ultimately, the anger over these kinds of comments comes down to two major issues: (1) Men feeling entitled to tell women how they should communicate in ways they'd never do with men, and (2) female leaders being discouraged from accessing the same range of human emotions that we celebrate in men. In this case, calling for Clinton’s message (benign as it was) to somehow be made more palatable or less angry — either by adjusting the volume or the way her face looks — is not that far a cry from telling her to “shut up and look pretty.”