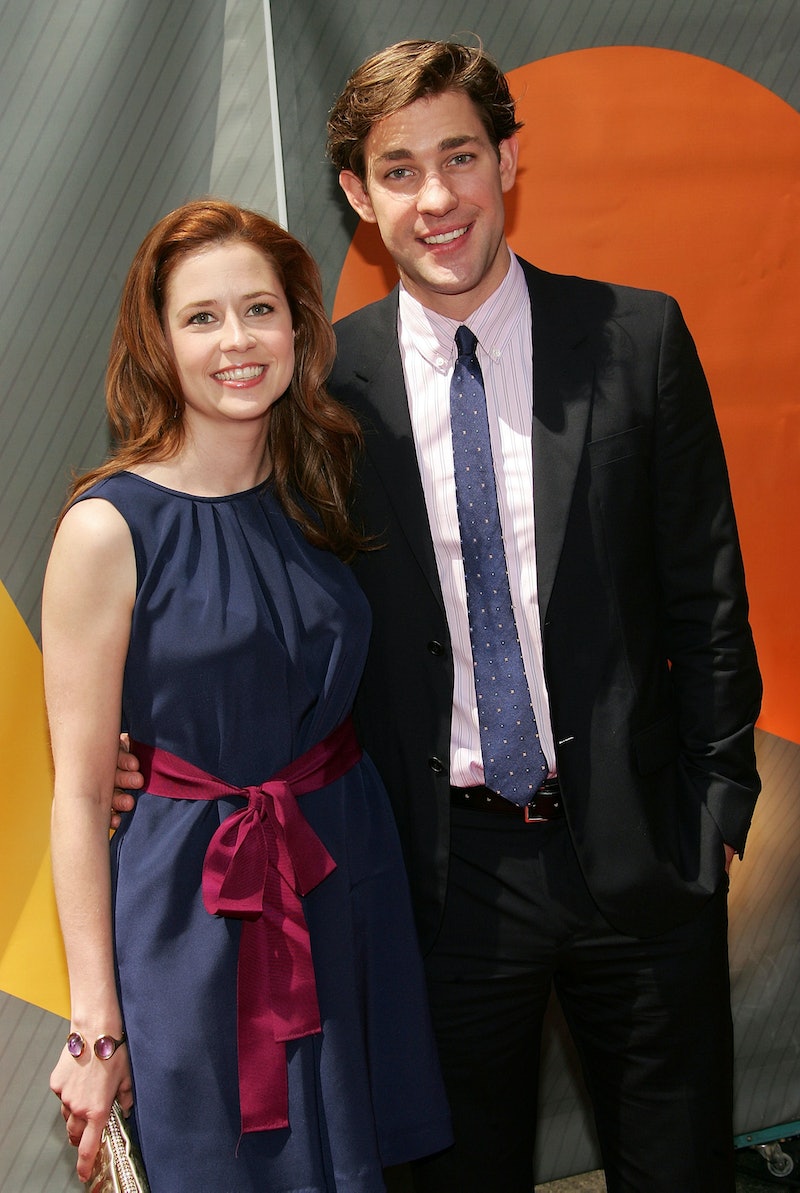 If you were a huge fan of The Office and are having a crappy Wednesday like that time Kevin dropped his famous chili, here's something that will perk you right up. But I must warn you, the following will probably make you ugly cry like Michael Scott. Are you ready? John Krasinski and Jenna Fischer reunited in New York at Krasinki's off-Broadway play, Dry Powder. Basically, this is the Jim and Pam reunion fans have been waiting for, because who doesn't want to see their favorite couple back together?

Krasinski shared a photo with Fischer on Instagram early Wednesday morning, which most definitely resulted in my heart skipping a beat. Alongside the picture, he wrote, "Sooooo....This rabid theater fan came to #DryPowder last night."

It's Jim and Pam, Pam and Jim, PB&J! What's not to love? I mean, they brought to life one of the most beloved TV couples of all time. Whenever Office viewers see the actors in real life, I guarantee they think about their characters Jim and Pam first. Seriously, they were the best.

Also, this sweet reunion, where the two are totally acting like their characters (Krasinski's expressive is so Jim and Fischer's smile is so Pam), will probably make fans feel relieved about all those confusing comments they both shared in January.

While appearing on Watch What Happens Live, Fischer dived into their real-life closeness. She said,

John and I have real chemistry. There's like a real part of me that is Pam and a real part of him that's Jim and those parts of us were genuinely in love with one another. But in real life we aren't totally Pam and totally Jim, so in real life we're not the perfect match. So, it's a really complicated thing. I mean, he was like a type of spouse that I had for a long time, he was my partner and we will always be close because of it.

Of course, many (myself included) freaked out over her words. Then, Krasinski commented on it in an interview with The Daily Beast and kind of broke fans' hearts everywhere with the following:

I think that was wildly misquoted or taken out of context. I’m sure she was trying to say something nice about how genuine the acting relationship was, of bringing a relationship that became that popular onscreen — and I think we both feel it’s such an honor to be a part of that relationship. As far as how she was quoted about saying we were "genuinely in love," I think that was taken wildly out of context and I feel bad for her.

Despite all of that awkwardness, it's clear that they do care about one another and support each other in their careers. I surely won't complain about that. Now, let's high five over their adorable reunion.