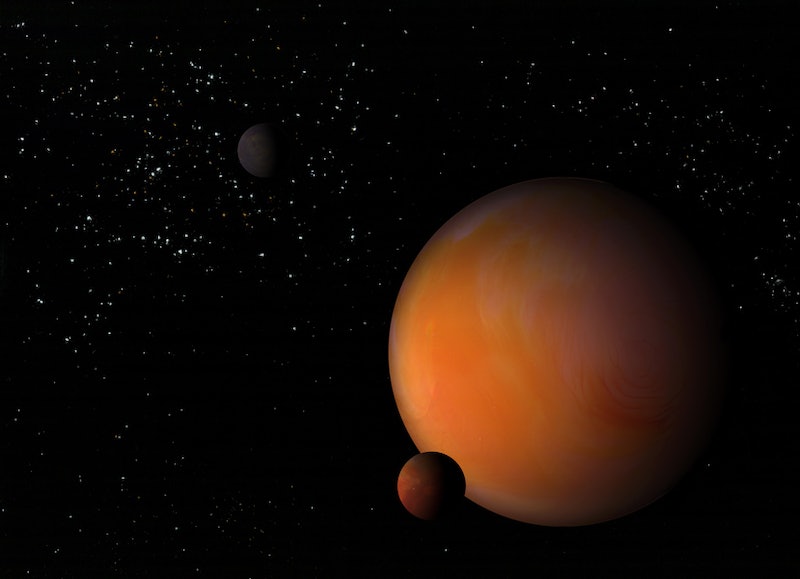 If you've never heard of the Wander Space Probe Instagram account, I suppose you have a good excuse. Photographer Navid Baraty invented the fictional Wander Space Probe, and creates the equally fictional scenes it photographs — and amazingly, he makes them out of food. And not only does "Wander" sound like a name NASA might really give a space probe, but the food-based scenes look like something you really might find out there in the vast universe.

"I've had a fascination with space ever since I was a kid camping in the backyard and looking at the stars through my childhood telescope," Baraty tells Bustle in an email. "I think the awe and wonder of space ignites our innate curiosity as humans."

That appreciation for space inspired him to create his own space scenes using only edible items. Baraty creates his scenes by placing items on a photo scanner and taking scans while the lid is open. The circular objects, like planets and moons, are usually created with glasses of water, which naturally create color swirls. But it can take a while to get an image right. "It really is a lot of trial and error," he explains. "It will often take me two to three hours before I get a scan that I'm happy with. The whole project has been one big experiment in progress."

And so far it seems to have been a very successful one. Things like a glass of water or half and half can containe wolrlds — literally.

In fact, the images look so real that Baraty says many people have mistaken them for actual photos from a real space probe — which he doesn't mind. He likes imaging they could be real, too. When he first started, he explains, "I thought it would be fun and exciting to frame the project around the idea of this imaginary spacecraft roaming around the universe taking photos of its encounters."

And indeed many of the photos even include fictional descriptions of Wander flying around the cosmos, snapping photos.

Baraty says that he definitely plans to continue with the project, and that he hopes that provide people with a little inspiration. "I'd like people to look at these images and think could my fictional creation of a planet or moon or galaxy actually exist somewhere in our universe? ... I'd like for the imaginary explorations of Wander to inspire others about the cosmos and actual space exploration."

One thing is for sure: They're certainly beautiful.

You can find more photos from the Wander Space Prob on Instagram, and check out more of Navid Baraty's work on his website or his personal Instagram.