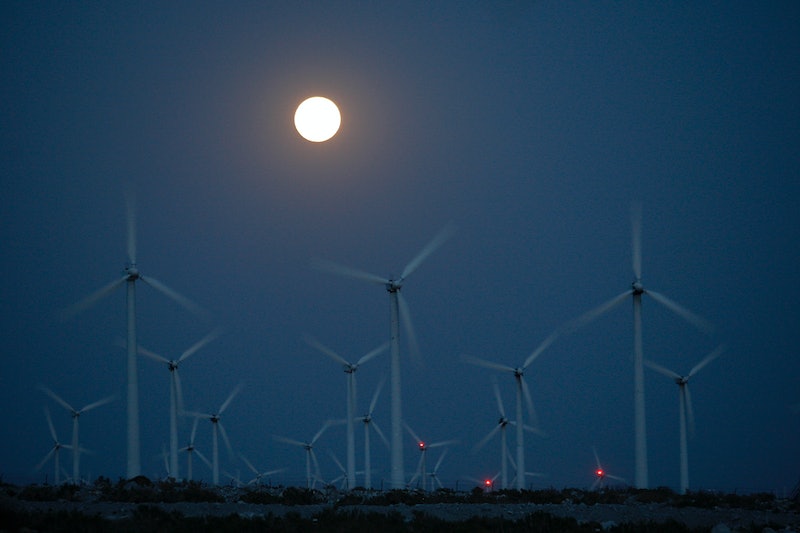 It's been a banner year for celestial events so far, and Earth Day (aka Friday, April 22, or today) is getting in on the fun with a full moon. But this isn't just any full moon — it's a mini-moon. Besides, "Awww, how cute!" you may be thinking, "What is a mini-moon, exactly?" Here are a few things to know about this intergalactic phenomenon.

Let's start with the definition. A mini-moon, also known as a micro-moon or apogee moon, occurs when there is a full moon or a new moon at the same time the moon is approaching its apogee. The apogee, as it were, is the point the moon's orbit is farthest away from the Earth. (Fun fact: The point closest to the Earth is called the perigee.) If you think about that for a minute, the name of this special moon makes sense — it looks smaller, or mini, because it is further away. In fact, it looks 14 percent smaller! It may also appear dimmer, since the part of the moon that is illuminated looks approximately 30 percent smaller. Of course, it's all just a big planetary prank — some celestial slight of hand, if you will. Why? Because a mini-moon is no smaller than any other full moon; it is the same size, just further away.

According to Earthsky.org, each year has a closest full moon and a farthest full moon, or mini-moon. And each mini-moon returns roughly one month and 18 days later each year. If you do the math, that means the mini-moon in 2017 will fall on June 9. This year's mini-moon lies around 30,000 miles farther from Earth than it will during 2016's closest full moon (or supermoon), which occurs on November 14. For the record, the moon's mean distance from Earth is typically about 238,855 miles away. The mini-moon, meanwhile, is around 250,000 miles away. November's supermoon? Only 221,524, making it the closest the moon has been to the Earth thus far in the 21st century. It won't swing back around and grace us with its presence that closely again until Nov. 25, 2034.

What's even more spectacular about this particularly mini-moon is that it also happens to be a pink moon. While you may be imagining an Elle-Woods-style, hot-pink-hued orb bedazzling the solar system, the name is a bit of a misnomer — the pink moon won't actually be pink. Rather, each full moon has nicknames derived from Native American folklore. April's full moon, or the Pink Moon, stems from one of the first plants to flower each year: the Pink Phlox. According to the Farmer's Almanac, it is known in some cultures as the Grass Moon, the Egg Moon, and the Fish Moon; it earned the latter name because it coincided with the time of year shad swam upstream.

At this point, you're probably wondering about your best bet to see this abnormally-small sucker. Technically, it actually rose last night around 1:30 in the morn. However, full moons are visible for about three days, so you'll still be able to enjoy the Pink, mini-moon tonight. If you'd rather take in the celestial event from the comfort of your couch, you can watch it via livestream video. But, c'mon, bruh. It's Earth Day — get outside and be one with the Earth and its smaller-than-normal full moon.

More like this
13 Summer Solstice Quotes To Celebrate The Longest Day Of The Year
By Sadie Trombetta
The Summer Solstice Spiritual Meaning, Explained
By Jessica Booth and Brittany Beringer
15 Years Of The iPhone, In Pictures
By Emma Carey
YouTuber Runs Into Margaret Sanger’s Grandson While Filming
By Alexis Morillo
Get Even More From Bustle — Sign Up For The Newsletter