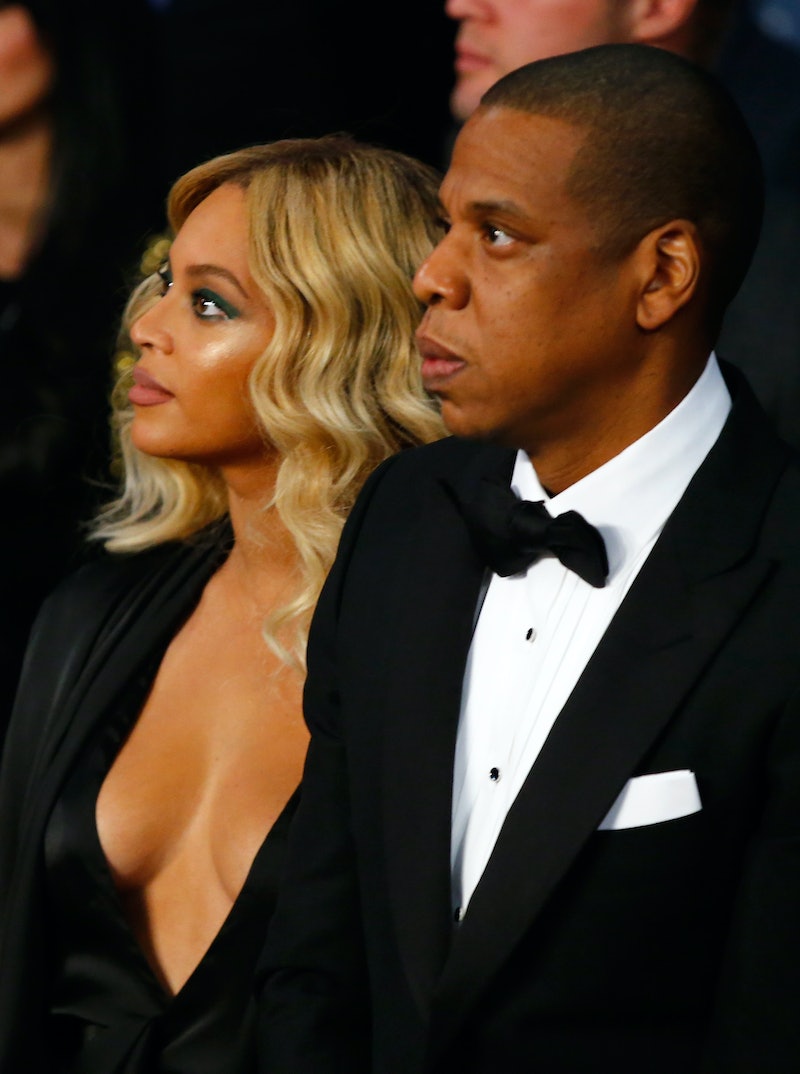 Based on the telling lyrics and strong themes of infidelity on Beyoncé's Lemonade, many believe that she absolutely skewered Jay Z over rumors that he cheated on her with any number of women who could be "Becky with the good hair." But Beyoncé and Jay Z were just photographed for the first time since Lemonade dropped over the weekend, and the couple — who have been together for over a decade and married for eight years — looks totally normal.

Bey and Jay were photographed while riding on the back of a golf cart in Miami after a long day of Formation Tour rehearsals for Beyoncé. Though E! Online, which shared the pics, was quick to point out that Jay Z looked far happier than the singer, who had a more serious expression on her face, it's worth noting that Beyoncé reportedly spent 14 hours rehearsing that day.

"Things seems to be going well with the two of them. When only a few people were around, Jay showed some affection [toward] Beyoncé," an insider told the site. "He put his hand around her and gave her a big hug. He is giving her space though to rehearse and coming and going, but still showing her that he is by her side. He will be with her for many of her concerts."

Regardless of Jay Z's alleged infidelity and the fact that Beyoncé seemingly put him on blast in the visual masterpiece that is Lemonade, it's clear that she has made the decision to stay with her husband, and he is supporting her throughout her tour and through the release of the album.

As an interesting note, one source claimed to Page Six that Jay Z helped craft the "storyline" for Lemonade.

"They develop these storylines to sell albums. Lemonade is a movie crafted to drive sales," the insider claimed. "Jay and Beyoncé are entertainers at the top of their game. Do you think Jay would release her album on [his own] Tidal if it really was all about him? He is 100 percent behind this."

It's an intriguing idea. While Lemonade is an anthem for feminism, black women, and self-acceptance, it's also rife with themes of infidelity and tells a story of the grieving process, from anger and hurt to, ultimately, forgiveness. With lyrics like "I regret the night I put my ring on," and spoken word interludes about infidelity ("You remind me of my father, a magician. Able to exist in two places at once. In the tradition of men in my blood, you come home at 3 a.m. and lie to me"), it's not hard to interpret these lyrics to be autobiographical. But at the end of the day, Beyoncé is there to sell her craft and build buzz around her work.

"They’re marketing masters. They’re pros at this," another source said. "The more attention, the more they sell, the better. All that speculation is to get press when they need it. Lemonade is much deeper than infidelity, but that’s the focus. As long as people are talking, they don’t care."

The idea that all of Lemonade is just a marketing ploy is obviously pretty far fetched, but the notion that Jay Z has been in the loop this entire time — and Beyoncé addressed rumors of infidelity because she knew it would make headlines — could explain why the two appear to be on good terms since the release of the album. Of course, that could also be because Beyoncé had already made the decision to stick with her husband and now things are all good.

P.S. We talked Lemonade on the latest episode of Bustle's podcast The Chat Room, because duh. Listen here:

Either way, in the first photos since the release of Lemonade, it appears as if Bey and Jay are putting on a united front.