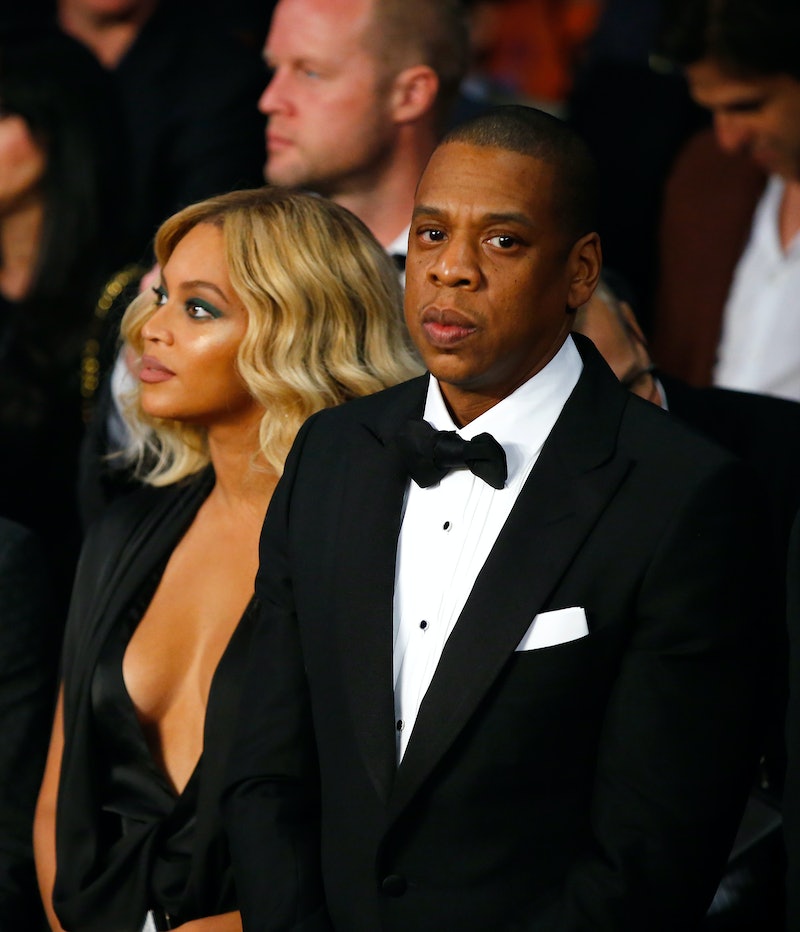 Hell hath no fury like Beyonce scorned. Her HBO special, aka art film Lemonade, implies that her husband Jay Z cheated on her. Yes, the Twitterverse seems to think Lemonade, which is also a digital album, is about Jay Z cheating on Beyonce. Fans, viewers, the Beyhive, and more are furiously responding to the content and the lyrics, which reference infidelity multiple times. At one point, Bey demands to know, "Are you cheating me?" She also drops lyrical science about regretting putting a ring on it and sings (more like snarls) about "Becky with the good hair" as though she were a mistress. Is Bey trying to tell us something in a thinly veiled and artistic way? Is she revealing to the world that her husband Jay Z cheated on her?

It's certainly heavily suggested in the passionate music and verbal barbs. My initial interpretation was that Beyonce was taking the cliche of making lemonade out of life's lemons and applying it to real life. With titles in the HBO special like "Anger" and "Accountability," there's not really a lot of subtext going on here.

Is Beyonce so highly evolved that she is able to mine her pain as source material for an entire album and forgive Jay Z at the same time? It's quite possible. But then again, her father and former manager Mathew Knowles was unfaithful to her mother Tina, so this whole thing could be entirely conceptual.

Even so, Beyonce seems to be making some accusations about infidelity and they are about someone she loves.

In her song "Sorry," one of the verse says:

Looking at my watch, he shoulda been homeToday I regret the night I put that ring onHe always got them f*cking excusesI pray to the Lord you reveal what his truth is

In her song "Love Drought," the tune starts:

The song "Pray You Catch Me" starts:

And then there's "Hold Up," which begins:

Something don't feel rightCause it ain't rightEspecially comin' up after midnightI smell your secret, and I'm not too perfect

Who the f*ck do you think I am?You ain't married to no average b*tch boyYou can watch my fat ass twist boyAs I bounce to the next d*ck boyAnd keep your money, I got my ownGet a bigger smile on my face, being alone

Perhaps it's her song "Freedom" that says how she really feels:

The chorus of "All Night" seems to hint at time healing wounds:

And again on "Hold Up," which has a great, bouncy beat, she doesn't mince words:

I smell your secret, and I'm not too perfectTo ever feel this worthlessHow did it come down to this?Going through your call listI don't wanna lose my pride, but I'ma f*ck me up a b*tchKnow that I kept it sexy and know I kept it funSomething that I'm missing might be my head for once

On "Sandcastles," she gets whimsical:

We built sand castles that washed awayI made you cry when I walked awayAnd although I promised that I couldn't stay, babyEvery promise don't work out that way, oh, babe

If Jay Z did have the audacity to stray and be unfaithful to Beyonce of all people, it doesn't seem as though they are divorcing. Lemonade does feature the Hova during a ballad that seems to be about forgiveness.

The special also ends with an executive producer credit for Beyonce Knowles Carter, which is telling. Later in the special, she also sings about a fixing things, so it ends on a note of hope. Draw your own conclusions.

Bustle has reached out to Beyonce and Jay Z regarding the divorce and cheating allegations, but has yet to hear back.

More like this
The 2023 Grammy Nominations List Is Full Of Surprises
By Jake Viswanath
J. Lo Just Announced A New Album — And Ben Affleck Inspired At Least 1 Song
By Stephanie Topacio Long
Mariah Carey Is "So Proud" After Her Kids Joined Her In The Thanksgiving Day Parade
By Stephanie Topacio Long
Kim K Is Putting Kanye’s Memorabilia — Like Grammys & Clothes — In A Vault
By Jake Viswanath
Get Even More From Bustle — Sign Up For The Newsletter