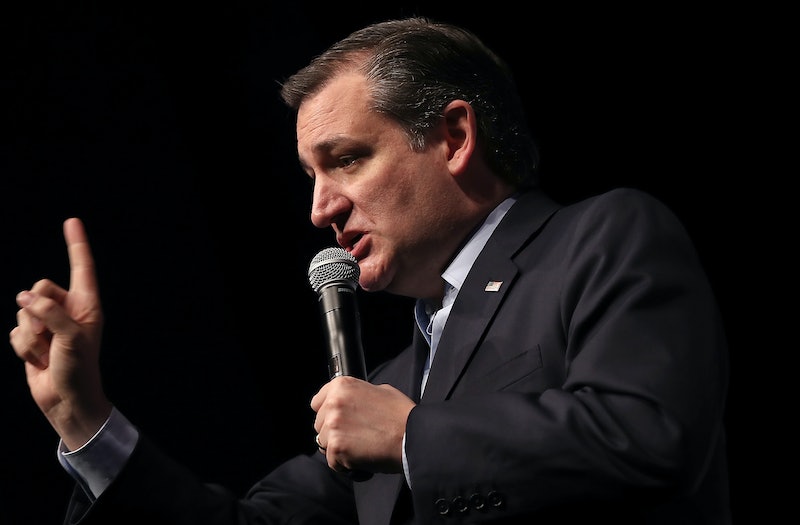 If you've been following the primary season closely, you've likely noticed that the Republican Party's delegate allocation system is extremely complex. Rules vary by state, and it's hard to keep track of what's really at stake where and when. That's mostly because several states implement a winner-take-all or winner-take-most model for allocating Republican delegates, rather than the more straightforward proportional allocation model used for Democratic delegates. If Republican delegates were allocated proportionally, what would the race look like between Donald Trump and Sen. Ted Cruz?

Finding the answer involves applying the percentage of the popular vote each candidate has earned to the delegates that have been allocated. Fortunately, NBC News crunched the numbers up until April 11 to give us a strong head start. Their analysis found that Trump had earned 45 percent of delegates up to that time, but only 37 percent of the popular vote. He had 756 delegates out of the 1,680 delegates allotted up to April 11. If Trump had received about 37 percent of those instead, he would have had about 621 delegates in mid-April.

According to the NBC News analysis, Cruz had won about 28 percent of the popular vote. That would put him with about 470 delegates at the time. Let's consider what's happened since then to bring these numbers up to date.

In New York's primary, Trump got about 60 percent of the vote, Associated Press reported. Gov. John Kasich actually came in second with 25 percent (but I'm not tallying up his numbers because he'd still have no shot at winning). Cruz got under 15 percent of the vote. Even the Democrats have a 15 percent qualifying threshold in order to win any delegates, so I'll divy up New York's 95 to Trump and Kasich. This would leave Trump with about 66 delegates from New York (as opposed to the 89 he actually got).

Now onto April 26. Interestingly, Rhode Island did allocate it's delegates proportionally; Trump took away 10, and Cruz got 3. Based on Associated Press numbers from the other Tuesday states, Trump would have gotten around 68 delegates from the five contests (as opposed to the 109 he got) if they had been allocated proportionally. Cruz would have taken away 16 for the day.

So this brings us to a total of 755 for Trump and 486 delegates for Cruz. Proportional allocation would not have done second-place Cruz much good in this race, then. But it turns out that, if the Republican Party allocated its delegates proportionally like the Democrats do, we'd be destined for a brokered convention in 2016. Since a candidate needs 1,237 delegates to secure the nomination, and there are only around 500 delegates left to win, no candidate would be in a position to get there.

The situation is very different in reality; Trump has over 950 delegates and is within reach of the nomination. He's got some wonky allocation rules to thank for it.