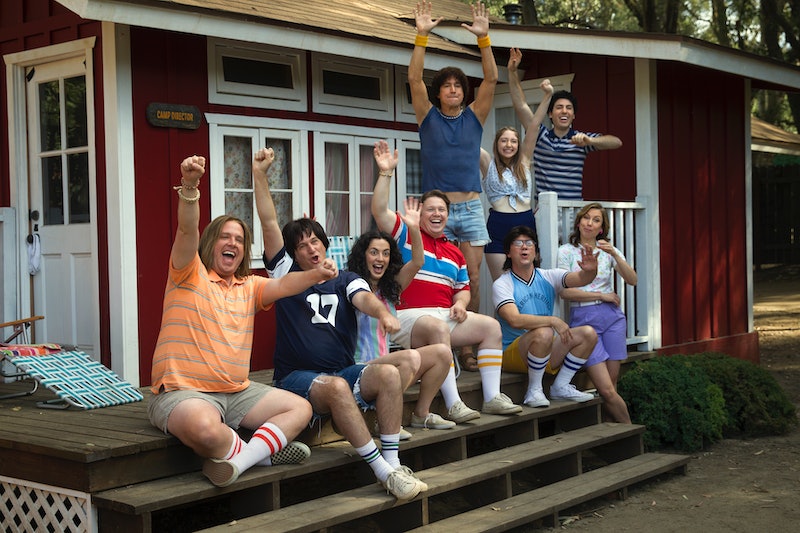 Pack your bags and say goodbye to your parents, because Netflix is taking you back to Camp Firewood with Wet Hot American Summer: 10 Years Later . Set to air in 2017, the new eight-episode series (season?) will form a Wet Hot American Summer trilogy of sorts as the campers make good on their promise to reunite at 9:30 a.m. at Camp Firewood 10 years after their last day of camp, as they settled on during their last day of camp. The big question now is which campers will return for the Wet Hot American Summer reunion? While Netflix has yet to make any casting announcements the coda from the 2001 film offers a big clue.

At the end of the film, the movie fast forwards to the campers' promised August 1991 reunion and McKinley (Michael Ian Black), Susie (Amy Poehler), Ben (Bradley Cooper), Lindsay (Elizabeth Banks), Neil (Joe Lo Truglio), Victor (Ken Marino), Abby (Marisa Ryan), Gary (A.D. Miles), and J.J. (Zak Orth) are all there — even though J.J. is slightly late. Granted, all of those actors are crazy busy these days, but they also all made time to return for the First Day of Camp on Netflix in 2015. It helps that the group of super talented comedians who make up the all-star cast of campers seem to genuinely like each other. Even if those nine actors all return, the camp reunion will not be complete though. The reunion just wouldn't be the same without Paul Rudd's Andy, camp cook Gene (Christopher Meloni), and arts and crafts counselor Gail von Kleinenstein (Molly Shannon) — plus the other dozen or so awesome actors who appeared in the movie and first Netflix series.

The first Netflix revival introduced new characters like Jon Hamm's The Falcon, Chris Pine's elusive rock star Eric, and Kristen Wiig's super rich camper Courtney from rival camp Tiger Claw, and they are all essential parts of the crazy universe now. If anything, the reunion should up the ante by adding even more stars. Can someone page Tina Fey and Chris Pratt? Because they are needed at Camp Firewood, STAT.

Netflix and writers David Wain and Michael Showalter did a superb job at accommodating the actors' schedules during First Day at Camp. In demand actors like Cooper, Rudd, Pine, and Banks weren't in every episode, but it made sense because Wet Hot American Summer only has roughly 85 storylines going on at any given time. The flexibility means there is plenty of reason to hope for a full turn out when the official cast list is announced.

Even if every single actor cannot come back to give fans a '90s flavored update on their character's life, the fact that the reunion is being held at the camp 10 years later opens the door for new campers, new counselors, and new hermit rock stars to join in the sludge fighting, world saving, drug-fueled adventures. Honestly though, as long as H. Jon Benjamin returns as the talking can of beans all will be right with the world.