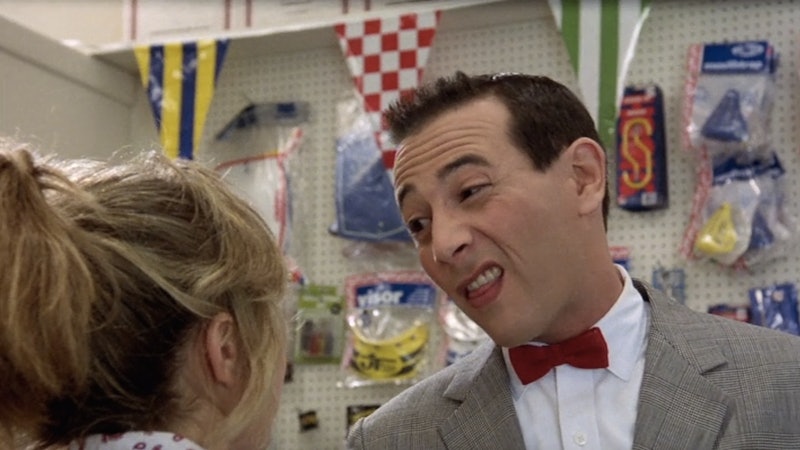 If it’s strange to think about a Tim Burton film sans Johnny Depp and Helena Bonham-Carter, it’s stranger to think that Burton’s debut flick Pee-Wee’s Big Adventure has been around for over 30 years. We recently just went through a 2016 great Pee-Wee renaissance with the Netflix release of Pee-Wee’s Big Holiday . But now that we’re all adults (I mean, except for Pee-Wee himself), it’s time to get reflective and check back in on the cult classic. Because, believe it or not, Pee-Wee’s Big Adventure is a lot weirder than you remember... and that’s starting from an already hefty base of weirdness.

Incidentally, the plot is pretty simple and straightforward: Pee-Wee gets his beloved bike stolen and goes on a quest to get it back. A kid could understand that premise, and that’s great because it’s supposed to be a kid’s film. What’s actually concerning, then, is Pee-Wee’s Michael Jackson-esque persona and all the nightmare fuel they spray all over the place. If you replace Danny Elfman’s soundtrack with something a little more sinister, this is basically a horror flick.

So that said, it’s worth a double-take. And, without any more delay, here are 23 especially ridiculous moments from Pee-Wee’s Big Adventure.

1. Pee-Wee Herman, In Spite Of His Childlike Ways, Still Invested In A Stripper Pole

In fact, pole-dancing is how he keeps that taut figure.

2. The Amount Of Effort It Takes To Make Breakfast Via this Contraption

Has he never heard of Eggo waffles?

Maybe he should get the plumbing looks at or something.

4. This Is Not An Orange

That is a salmon-colored, juice-spouting stress ball if anything.

5. At What Point Did Pee-Wee's Mostly Faulty Machine Manage To Make A Pancake Face?

And why is he still living with his father? I mean, Pee-Wee is an overgrown 6-year-old but he still owns his own property.

7. Pee-Wee Is Friends With All These Child Buzz Lightyears

"Space Commander" is a popular job title among the tween set in this town.

8. That Awkward Moment When Dottie Is Also The Voice Of Tommy Pickles

You will now be forever unable to un-hear that when you watch this movie.

9. Pee-Wee Gets His Bike Stolen With All That Max Security And He's Not In South Philly

Because if he was in Philadelphia then, yeah, nothing is going to keep your bike from being stolen, but the palm tree and overall aesthetic of sunshine and happiness implies otherwise.

10. Not Really Sure What Pee-Wee's Trying To Do To Francis Here

If he's trying to drown him...

11. Not One But Two Cheetah Rugs In The Living Room?

12. Any Reason Why This Ex-Convict Has Women's Clothing In His Car?

Or, not that I'm judging, why Pee-Wee might carry some sweater dresses and wigs on his person?

13. This Forest Is Filled With A Lot Of Taxidermy

I mean, the good news is that half of those animals can't hurt them.

14. That Moment When You're Just Trying To Enjoy A Light-Hearted Children's Film And...

15. Huh, These Are The Only Phone Calls I Can Have, Too

Like I'll FaceTime for my dog, but I can only order Chinese food through Seamless, it's weird.

16. Dottie Doesn't Know How To Use Banana Clips

But, to begin with, I'm pretty sure using two at the same time is a risky move at best.

17. The Fact That Pee-Wee Borrows These White Heels For His Performance Of "Tequila"

Thank God they were in his size; otherwise he would've been brutally murdered at the hands of 30 bikers.

18. The Fact That the Bikers Had A Spare Vest To Give To Pee-Wee

Also a motorcycle that they could just hand off for fun.

19. The Fact That Pee-Wee Keeps Getting Sent To The Hospital And You Know This Dude Doesn't Have Any Health Insurance

Incidentally, this is more tragic than weird. #justlittlemanchildthings

20. This Future Injection Of Nightmare Fuel

If you want an extra dosage of terror, send in the clowns.

22. Pee-Wee's Biker Friends Put On Their Sunday Best For The Movie Premiere

23. Really, Nobody's Screaming At Them For Blocking The Screen?

Then again, this isn't the movie we came here to watch, so...

In it's on bizarre way, though, the real adventure Pee-Wee embarks on is worth revisiting. So feel free to stop by Netflix and join the bow-tied crusader on another journey today.