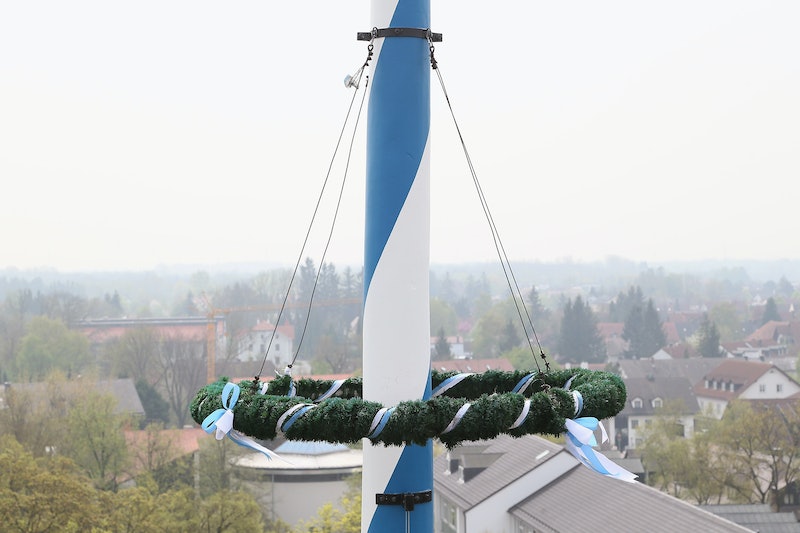 You’ve probably seen a Maypole dance at one point or another, whether you know what a Maypole is beyond its self-evident status as, ya know… a pole. But the Maypole and the decorating of said pole has roots in the ancient Pagan festival celebrating the beginning of the pastoral summer season.

Though the origin of the practice of wrapping a tall pole in ribbon and woven tree branches is difficult to pin to a specific time and place, historians agree that the Maypole began as a part of the Pagan May Day festival known as Beltane in the UK and Ireland and Walpurgis in Germanic European countries. The Maypole dance was almost definitely a fertility rite meant to symbolize the union of the masculine and feminine, which is a major theme in May Day celebrations across the historical Pagan footprint.

The pole is made from a young tree, cut down when its trunk reached the proper height for performing its duties as a Maypole. The pole, as you may have guessed, is the masculine part of the equation for this springtime tradition. Then, during the festivities, villagers would dance around the pole, weaving through each other while wrapping the Maypole in ribbon and foliage — those would be the feminine qualities — in the hopes of bringing fertility to the livestock, the land, and the people living off of it.

Maypole dances have been viewed as scandalous at various points throughout history, largely in the 18th and 19th centuries, and were even banned in 1644 by British Parliament, described by self-described “Puritan Moses” (… no offense to actual Moses) Oliver Cromwell as “a Heathenish vanity, generally abused to superstition and wickedness.” But today, May Day revelers are free to practice the tradition anywhere they please.

More like this
19 Instagram Captions For Celebrating Black History Month
By Ayana Lage
8 Things You Can Do To Appreciate Lunar New Year
By Elizabeth Tsung
16 Trader Joe's Appetizers That Are Total Party-Pleasers
By Kaitlyn Wylde
25 Inspiring Quotes From Black Women To Celebrate Black History Month
By Kyli Rodriguez-Cayro and JR Thorpe
Get Even More From Bustle — Sign Up For The Newsletter
From hair trends to relationship advice, our daily newsletter has everything you need to sound like a person who’s on TikTok, even if you aren’t.