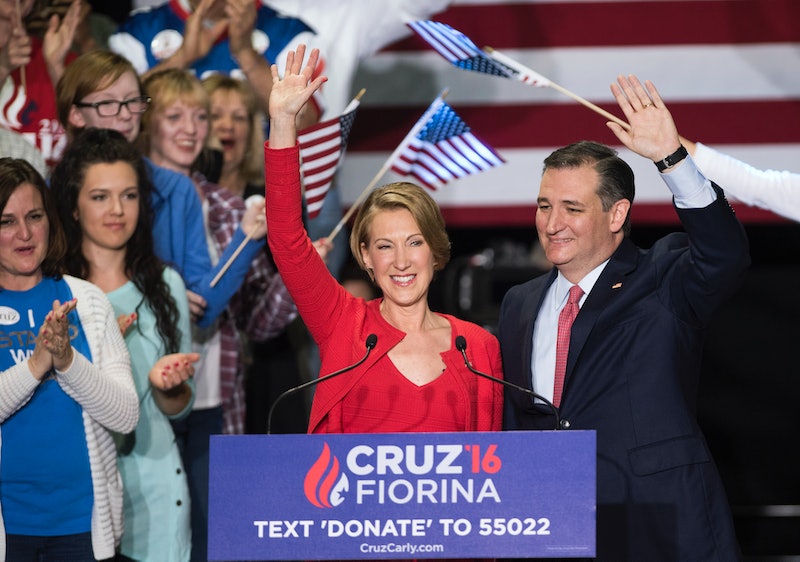 The biggest political news of Wednesday — at least in Ted Cruz's world, as he keeps truckin' on toward the White House despite five losses Tuesday night — is that he has already selected his running mate and vice presidential candidate, should he take the Republican nomination. He has selected none other than Carly Fiorina, a face and name who made headlines of her own during the first few months of the Republican presidential primaries. For anyone who doesn't remember, there were certainly times Carly Fiorina has insulted Ted Cruz on and off the debate stage prior to her endorsement in March — so whether this is a strictly political move, or if the two are actually real friends, is utterly unknown.

In the preliminary stages of the Republican presidential candidacy race, derogatory words and phrases were flying about with striking frequency. Granted, much of that was due to Donald Trump's presence in this race; however, others — like Fiorina — had her moments, whether in rebuttal or as conversation starters. Fiorina and Cruz were not always on the same side, and taking a look back at some of her choice comments about the Texas politician is... probably not something either Fiorina or Cruz are interested in at the time being.

Fiorina Said Cruz Is Just Like Any Other Politician

Back in January, remember, Fiorina was still in the race. When asked about her views on Cruz's effectiveness in the Senate, she said she did not blame him for the inability to repeal the Affordable Care Act — which she calls Obamacare — but she does think he is just like any other politician. She explained, "I would say that Ted Cruz is just like any other politician. He says one thing in Manhattan; he says another thing in Iowa; he says whatever he needs to say to get elected, and then he's gonna do as he pleases."

She Said Ted Cruz Contributed To The Government Shutdown

In an interview following the infamous shutdown, she criticized Cruz, saying: "President Obama wanted this shutdown and Ted Cruz played right into his hands. Everybody could see this train wreck coming."

Her remarks were a critique of Cruz's foresight, and she essentially called him gullible in so many words. She defended her previous statements by explaining, "Ted and I have disagreed on tactics."

She Upped The Ante By Donating To Vets, Leaving Cruz And Trump Behind

This tweet, from around that time she was not allowed on the same debate stage as the others, reveals a time when she was in heavy competition against both Cruz and Donald Trump.

She Explained That People Are Tired Of Career Politicians

Although this was not directly aimed at Cruz, he is of the class she was targeting via this remark. It certainly was not aimed at Trump, since that is one category to which the celebrity candidate does not adhere.

In the fifth GOP debate, the internet had gone wild when Fiorina remarked, "I will just add that Margaret Thatcher once said: If you want something talked about, ask a man. If you want something done, ask a woman." In all fairness, perhaps that is why she agreed to lend Cruz a helping hand.

Now, look, humans are by nature fluid creatures who change their minds all the time. Fiorina may like Cruz, but feel he is also subject to criticism like anyone else. After all, Cruz and Fiorina have much more in common than Cruz has with many of the other former presidential candidates.

Could this turn into the boost the Cruz campaign needs to solidify the final sets of states over the next two months, or is this going to evaporate from America's collective political memory as quickly as it happened? A couple of months' time will answer that question.