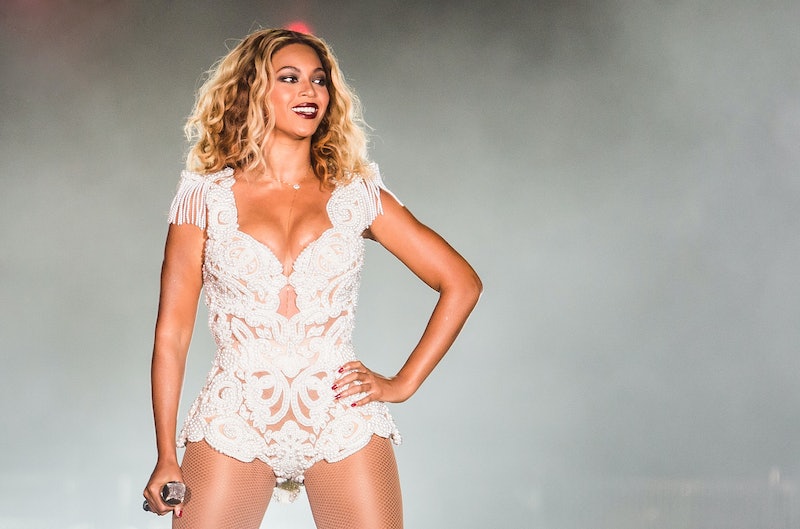 On first listen, Beyoncé's latest album Lemonade may sound like nothing she's done before, but delve a bit deeper into her catalogue and you soon realize she's been foreshadowing this visual album for a while now. Over the course of 12 tracks, Beyoncé tackles the subject of infidelity head on, allowing herself to be angry, sad, vulnerable, and then forgiving. Queen Bey may or may not be referring to her real life marriage to Jay Z on her sixth album, but the topic of cheating is certainly one she's sung about before.

Throughout her career, Beyoncé has been known for her female empowerment anthems that encourage women to run the world and let her man know that he needs to put a ring on it, but throughout the course of her career she's also spent a good amount of studio time putting her feelings about unfaithful relationships to music.

These songs, many of which are ballads, get at the pain of being a woman who loves someone that hurts her. On these cheating-focused songs, Beyoncé lays it all out on the line, giving fans a sense of the pain infidelity can cause. In each and every one, she gets real about what it feels to have someone take advantage of your love. So, from B'Day to her surprise self-titled album, these are the 12 tracks that clearly mimic the themes of Lemonade.

Beyoncé goes all Sharon Stone in Basic Instinct in this video for the B'Day track that has her calling on her female intuition to call out a man who's playing her. Bey's not one to explain her songs so it's not clear what this one is about, and we'll have to decide for ourselves what she really means when she sings, "You can't stay, you gotta go/ Ain't no other chicks spending your dough." One thing is clear though: Beyoncé was channeling the attitude she's giving on this track for the Jack White-assisted Lemonade track, "Don't Hurt Yourself."

This song off I Am... Sasha Fierce, co-written by her sister Solange, has Beyoncé looking for some appreciation. "I got beauty, I got class/ I got style, and I got ass," she sings. "And you don't even care to care." Bey continues with the theme of being invisible to her man despite the fact she's doing all she can by mentioning, "I even put money in the bank account/ Don't have to ask no one to help me out/ You don't even notice that." On Lemonade, she's far less concerned with her man knowing she helps out with the bills and wants to make it clear her money's all her own, and she'll gladly take it with her when she goes. As she sings on "Don't Hurt Yourself": "And keep your money, I got my own." That she sure does.

This song was a dedication to her mom, Tina Knowles, who had picked herself up after her husband (and Beyoncé's dad) cheated on her. Mama Knowles' voice ends the song, giving women who have dealt with bad husbands a bit of advice: "If you're going through it, just know it's called 'going through it.' You're not gonna get stuck there, you're not gonna die. You're gonna survive." Words Beyoncé may have taken to heart — it seems to directly influence Lemonade in a lot of ways.

Even since her Destiny's Child days, Beyoncé has been calling out cheaters. This track off The Writing's On The Wall gets at a guy who won't call her baby over the phone like he usually does, which gives her some concern that he's running game behind her back — something she won't stand for. "First of all, let me say," Beyoncé sings, "I am not the one to sit around and be played/ So prove yourself to me." Seems to be a similar message she's sending throughout Lemonade, which has her making it clear she's not sorry in "Sorry."

This song off B'Day has Beyoncé revealing the pain her man has caused her with his indiscretions. "I'll always remember feeling like I was no good/ Like I couldn't do it for you like your mistress could," she sings. "And it's all because you lied/ Loved you more than another, more than my own life." This emotional song got a lot of attention during Bey and Jay's On The Run Tour in 2014 when she swapped out the original lyrics of the song for ones that seemed to highlight her own life. Instead of singing that she'd "been riding with you for six years" she changed that number to 12, the amount of time she's been with Jay.

This ballad off of I Am... Sasha Fierce gets at what it's like to be a woman, something she would focus more on with Lemonade. But this song also talks about what it means to be a good man, something she said she would be if she was a boy. "I’d listen to her/ 'Cause I know how it hurts/ When you lose the one you wanted," she sings. "'Cause he’s taken you for granted/ And everything you had got destroyed." Now a little older and a little wiser, Beyoncé is tired with these kinds of boys and is calling out this kind of behavior so that other women can avoid it. On Lemonade, Bey's not interested in changing her man, she's looking within herself to decide if forgiveness is what she wants.

"You're not an angel either, but at least I'm trying." On this track off her self-titled release, Beyoncé seems to be copping to some faults on her behalf, but it's interesting to wonder whether she's overcompensating. Especially, since Beyoncé seems uninterested in taking the blame for other people's mistakes on "Sorry," where she makes it clear she has nothing to apologize for.

With this song off 4, Beyoncé is all about karma. She lets her ex know it sucks to be him, especially since he's missing out on being with her. Beyoncé is in control here, making it clear she has the power to give her love and then take it away when she realizes it's not being appreciated. The first half of Lemonade seems to continue this thought process as Beyoncé lets everyone know she is not to be trifled with.

Beyoncé gets emotional on this I Am... Sasha Fierce track that deals with the pain of having to leave a cheating lover. But just because she knows she should leave doesn't mean it's easy, you can hear the trepidation in her voice when she sings, "I know that I love you/ But let me just say/ I don't want to love you in no kind of way no no/ I don't want a broken heart/ And I don't wanna play the broken-hearted girl." Seems she isn't anymore.

With this B'Day track, Beyoncé let us all now that if you do her wrong your stuff will be waiting for you in a box to the left while she gets ready for another date. It's the ultimate breakup anthem that asserts Bey's power and looks to empower women everywhere. Something she's still doing today.

"I told you how you hurt me baby, but you don't care," Beyoncé sings on the 4 track that will likely have you drawing comparisons to "Love Drought" on Lemonade. Both songs have Beyoncé revealing her vulnerable side and making it clear she needs her guy need to care as much about the relationship as she does.

Jealousy rears its ugly head on this song off her self-titled album. "And I love making you jealous but don't judge me," she sings. "And I know that I'm being hateful but that ain't nothing." But listening to Lemonade, you begin to feel like Beyoncé's jealousy was warranted the whole time. So warranted, in fact, that on "Hold Up" off Lemonade, Bey asked, "What's worse, lookin' jealous or crazy?" before answering her own question. "I'd rather be crazy."

These songs that deal with infidelity and the pain it can cause almost play out like a prequel to Lemonade. Each track a sign of what was going through her mind, whether she realized it or not.

More like this
Taylor Swift, Kerry Washington & More Speak Out On Uvalde Mass Shooting
By Jake Viswanath
Tulisa From N-Dubz Has Worked With Some Unexpected Musicians
By Maxine Harrison
After 'Heartstopper' Used This Indie Artist’s Song, Streams For It Soared 8,000%
By Alyssa Lapid
Kanye West Rapped About Feeling That His Kids Are “Borrowed” From Kim Kardashian
By Brad Witter
Get Even More From Bustle — Sign Up For The Newsletter