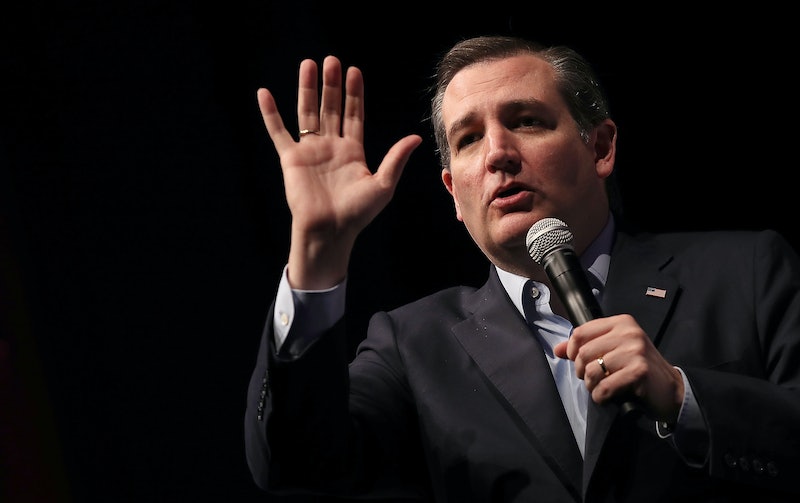 Get ready to start seeing this one on bumper stickers everywhere (well... maybe). Now the Ted Cruz-Carly Fiorina presidential ticket is a real thing, never mind that Cruz is far from the presumptive Republican nominee, campaign logos for the Cruz-Fiorina ticket are here as well, appearing on Cruz's website just minutes after his announcement. Right now, if you visit CruzCarly.com, you're treated to an animated page created by Cruz's presidential campaign, which describes Fiorina as a "tested leader." And on Ted Cruz's official campaign website, you can already buy Cruz-Carly signs for your yard!

"After a great deal of consideration and prayer, I have come to the conclusion that if I am nominated to be president of the United States that I will run on a ticket with my vice presidential nominee Carly Fiorina," Cruz said Wednesday at a much-anticipated campaign rally, going on to describe the former HP chief as "brilliant and capable." Just one day before, Cruz had lost five primaries on what had been dubbed Acela Tuesday, and in the week previous to his announced, Cruz had joined forces with candidate John Kasich in what many dubbed a desperate attempt to stop Donald Trump gaining the Republican nomination.

You can purchase a variety of Cruz-Fiorina merchandise from Cruz's online stone.

You can even pre-order a Cruz-Fiorina shirt.

In the "Meet Carly" section of CruzCarly.com, the reader is introduced to Fiorina as such:

Carly is now a leader in the conservative movement standing alongside all Americans who refuse to settle for the way things are and a status quo that no longer works for them. She believes we must end crony capitalism by fighting the policies that allow it to flourish. She believes we must fix our festering problems by holding our bloated, inept government bureaucracy accountable. And she believes Republicans must stand for conservative principles that lift people up and recognize all Americans have the right to fulfill their God-given potential.