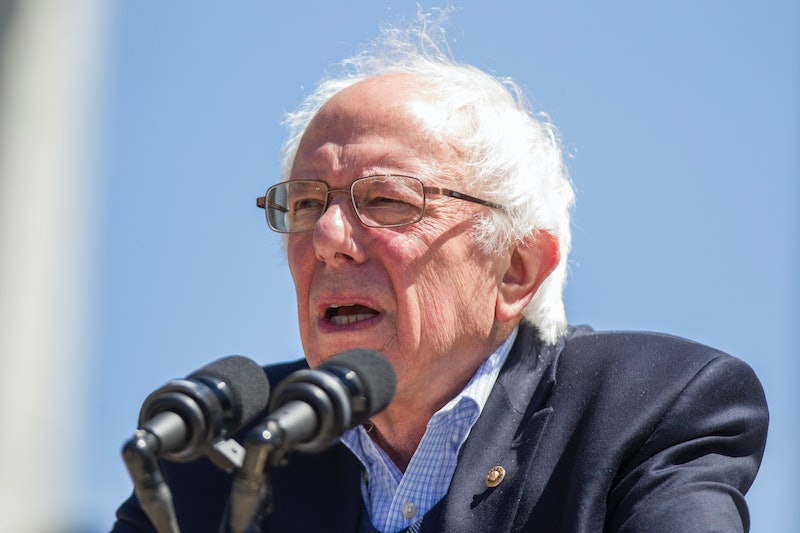 Falling a disappointing performance in Tuesday's primaries, Bernie Sanders said he would cut "hundreds" of staffers in an effort to shore up funds and solider on to the Golden State, according to a New York Times report. The Vermont senator only won Rhode Island on Tuesday, losing the four other states to Democratic frontrunner Hillary Clinton. While Sanders has refused to close up shop, revealing he'll downsize his team speaks volumes about his faith in his campaign's viability.

"We have had a very large staff, which was designed to deal with 50 states in this country; 40 of the states are now behind us. So we have had a great staff, great people," Sanders told the Times. When pressed about how many campaign staffers would be cut, Sanders admitted, "It will be hundreds of staff members."

POLITICO reported that field staffers in the five states that held primaries on Tuesday — Connecticut, Delaware, Maryland, Pennsylvania, and Rhode Island — were the targets of the cuts. "Staffers who were working in states that voted Tuesday were told to look elsewhere for work rather than continue on to the next voting states, according to people close to the campaign," POLITICO's Gabriel Debendetti wrote.

Sanders did say he hoped he could eventually rehire those who are laid off from his team, but that would be dependent on him having a winning next few weeks — bucking his recent primary trajectory. He told the Times:

If we win this, every one of those great people who have helped us get this far, they will be rehired ... But right now, we have to use all of the resources we have and focus them on the remaining states.

Despite the cuts (and the delegate math), Sanders insists he is still in the race for the Democratic nomination. After Tuesday's night of losses, Sanders issued a press release, proclaiming:

We are in this race until the last vote is cast. That is why this campaign is going to the Democratic National Convention in Philadelphia.

He does seem committed to campaigning at least through the California primary on June 7. He spoke to the Times of the state's significance to him and his campaign: "Symbolically and in terms of delegates, if we can win the largest state in this country, that will send a real message to the American people and to the delegates that this is a campaign that is moving in the direction it should."

Perhaps the only silver lining for Sanders in the last 24 hours is that Ted Cruz's arguably desperate announcement of Carly Fiorina as his running mate has largely overshadowed the announcement of staff cuts.