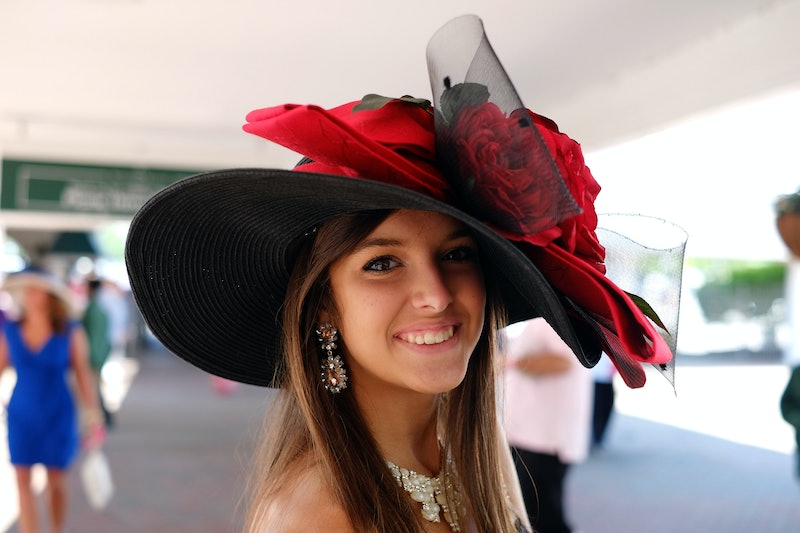 Each May, the Kentucky Derby gives celebrities the (likely only) excuse to fly into the state of Kentucky. There, clad in dresses and ornamental hats, they will mix with locals attending the annual horse race wearing blue jeans and T-shirts. With an array of styles and demographics, I've always been curious about whether or not the Kentucky Derby has a set dress code. Surprisingly enough, it doesn't. Well, unless you're a premium member.

For years, the Kentucky Derby at Churchill Downs Racetrack in Louisville, Kentucky (which, besides the Derby, is best known as J.Law's and Diane Sawyer's hometown), has been associated with pastel dress clothes and interesting hats, ranging from classic styles to downright silly. And this style is seen on both men and women, though their hats and dress clothes tend to differ. But those aren't the only costume attendees have to wear.

I spoke with Sara Brown Meehan, the director of lifestyle communications for Churchill Downs, who explained the technical dress code at the Derby and how the style changes per men and women. She says the pseudo-dress code actually goes back to when Colonel Meriwether Lewis Clark founded the racetrack in 1874. According to Meehan, Clark's inspiration for the Kentucky Derby came from the Epsom Derby in England. There, not only did he experience the obvious horse race, but he saw how the men and women dressed for the occasion. He wanted an event like that in the United States, too.

Meehan explains that Clark marketed the Derby as a place for everyone — celebrities and non — to come display the latest fashions, which, as in England, included hats. Back then, according to Meehan, it was actually indecent if women showed up to the Kentucky Derby not wearing a hat. And you don't dare expose your indecency to the people of Kentucky.

In the 1940s and 1950s, women actually wore suits to the Derby, typically paired with conservative hats. Well, conservative for the Kentucky Derby at least. In fact, Meehan says it wasn't until the 1960s when women, in particular, had more fun with their hats. This meant more color, a larger circumference and more ornamentation. "The hats started to get very colorful and get bigger. And really from then on, as the race has grown and the day and the event have grown in popularity, the hats have grown a lot with it. They’ve gotten bigger and people have a lot of fun with their hats," Meehan says. "A lot of people make them. You see it all the time in Louisville, or you’re getting to experience that this year. People put a lot of energy into their hats. Whether they’re purchasing them and trying to find the perfect hat, or they’re making them themselves."

Today, she says it would no longer be indecent for women to show up to the Derby without a hat. But when else do you get to wear such a fabulously ostentatious accessory? Meehan said it's the perfect time to take advantage of the opportunity, and I'd have to agree. I'll take any excuse to wear a large hat with a flower, feather, sparkles, or a combination of all three.

Ultimately, Meehan says the Derby does not have a dress code, unless you are a premium member, which includes select seating, and a cost of an extra many thousands of dollars.

Premium seating requires "track casual dress," as Meehan described the attire, which she says is basically business casual. Men spring for ties and jackets. Women will wear dresses. But both parties will wear hats. "We’re seeing more and more the men wearing hats. And it’s typically a fedora. Their hats tend to be smaller and [more] understated than the women. It’s really the women’s day for the hats, for the women to show them off. Whether it’s a really classy and sophisticated stylish hat. Or whether it’s something really fun and costumey," Meehan says.

In addition to ornamental hats, the women's dress code for premium seating is more strict. "Jackets are preferred and blazers for the men and shirts with collars, dresses for the women. But it’s more about what’s not accepted," Meehan says. Denim, shorts, T-shirts, halter tops, and sneakers are among some of the attire forbidden in the premium area.

The dress code is not meant to be restricting to the men or women attendees, but rather to create the experience the Kentucky Derby's founder was seeking. "It’s part of what’s so fun and it’s a part of that experience. When you get there and it’s a beautiful day and everyone is out in their spring colors, everybody is dressed up. And it’s a very see and be seen kind of event, you can actually see that energy at the track," she says.

As for the non-premium members, anything goes. But Meehan explained the majority will still adhere to the dress code of the premium members, because, again, why not take the excuse to wear pastels and giant hats? What matters is when "My Old Kentucky Home" plays at the start of the race and local and non-locals all get tears in his or her eyes as they sing along to the anthem.

"One of the great things about the Derby, it is a mix of tradition and spectacle, and I think that nothing reflects that as much as the fashion does on Derby Day," Meehan says. Right on.