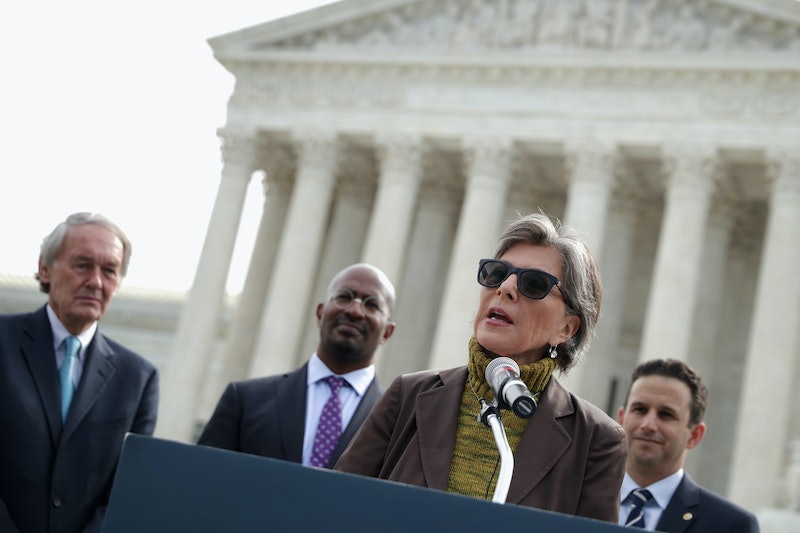 After Ted Cruz announced that he would make Carly Fiorina his vice presidential running mate were he elected president, California's junior senator Barbara Boxer nailed Fiorina in this single tweet. Boxer, who previously served in the U.S. House of Representatives, has a long-established rivalry with Fiorina dating back to their race in 2010, in which Boxer defeated Fiorina for the Senate seat in California by a 10-point margin. The contentious tweet is not all the senator had to say regarding the Cruz-Fiorina alliance; she actually spoke more on the matter — and with great abandon.

She called the Cruz-Fiorina pair "mean and meaner" as a slogan idea, and proceeded to remark: "He wants to ship immigrants out of America, and she's already shipped jobs out of America. They're the perfect duo." Ouch. Clearly, the tension from six years ago toward Fiorina has not subsided.

The tweet causing this media stir mentions the merger of HP and Compaq that Fiorina oversaw as former chief executive officer of Hewlett-Packard. It is widely viewed as unsuccessful. "I predict this Fiorina merger will be just as successful as her last one at HP," Boxer explained, nudging at the newly-named candidate for vice president. But that is not even all Boxer had to say.

She does not believe Fiorina will help Cruz's prospects in earning the votes of Californians. She voiced her views quite readily on that, as well: "The people of California rejected Carly Fiorina in a year that was a very tough year for Democrats." She also called Fiorina "a very mean opponent."

Boxer also went on to claim that Fiorina left California after she lost the race for Senate by over one million votes. Whether or not this is the reason she left Fiorina has not admitted. However, Boxer seems to believe it wholeheartedly.

In addition to these comments, Boxer called Fiorina "soft" on Iran, which was another tweet of hers in the series on Twitter just hours ago.

In any case, it is clear Carly Fiorina has some critics out there. Whether or not this is all the culmination of a long-term political rivalry, or actually hidden truths awaiting their shining moment is still uncertain. Sen. Boxer tweeted her messages with some confidence, but will VP hopeful Fiorina return the favor? Might Cruz involve himself in defending his vice presidential pick? At this point, anything is within the realm of possibility — America has certainly seen more outlandish things than this occur!