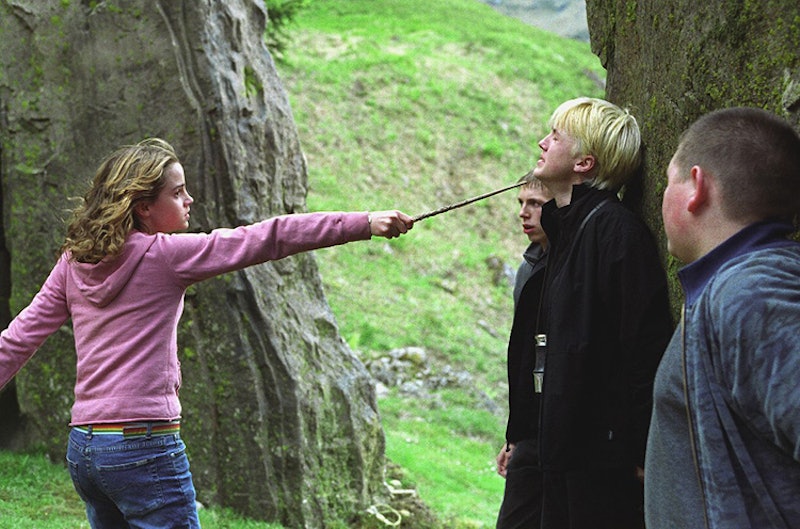 The first time I read the Harry Potter series, I instantly had a favorite character: the know-it-all, Hermione Granger. As a young nerd, I could identify with Hermione’s love of learning, and perhaps overeager attitude toward sharing what she had learned with everyone. Whether they asked to hear about it or not.

If you, like me, felt an instant connection with the brightest witch of her age, you probably spent a lot of time as a kid wishing you could live certain parts of her life — and maybe even steal Hermione Granger's wardrobe. A part of me was inconsolable when the film version of HP came out, because I didn’t get to portray Hermione. Of course, I would have actually had to audition for the movie for this to happen. That didn’t stop the melodramatic longing, though I now have a deep appreciation for the classy Emma Watson. Though I couldn’t be Hermione, I am very glad that she was.

Because who wouldn't want to be Hermione Granger? Maybe Harry was the protagonist of the series, but we all know that Hermione was the true MVP. Here are 10 times you definitely wished you were Hermione Granger:

1. When She Was Sorted Into Gryffindor

Even though she was extremely clever — the brightest witch of her age, actually — Hermione wasn't sorted into the house known for intelligence and wit. Instead of Ravenclaw, she was sorted into Gryffindor... potentially just because she, like Harry, asked to be placed in that house. No matter what house you'd want to be in, you've got to admire that Hermione was self-assured enough to make sure she got into her top choice.

2. When She Became BFFs With Harry And Ron

Though they got off to a rocky start, eventually Harry, Ron, and Hermione became the best trio ever. And who wouldn't want to be part of that? Fighting a troll together bonds you for life, or so I've heard, and I would love to be friends with Harry and Ron IRL. As long as my current friends could also come to Hogwarts and join the squad, of course.

3. When She Set Snape's Robes On Fire

Before you knew Snape's backstory, he was fun to hate. And when Hermione set his robes on fire... that was a great moment. Not only did she save Harry from falling off his broom (though indirectly), she showed off her skill in magic and got mini-revenge on Snape for failing to call on her every time she raised her hand. Sweet justice.

4. When She Hit Draco Malfoy

The other character you Loved To Hate (but sometimes admittedly just loved) was Draco Malfoy, so it was pretty exciting when Hermione punched him in the face. Of course, we know that violence doesn't solve problems, but after all of Malfoy's antics, the slap was satisfying. Don't lie: in that moment, you REALLY wanted to be Hermione Granger.

5. When She Used A Time-Turner

This is probably the number one reason I would want to live in the wizarding world as Hermione Granger: HER TIME TURNER. Imagine being able to turn back time and sleep in for a few more hours. Or being able to turn back time so you can order the waffles at your favorite breakfast place before it turns 11 and they stop serving them. Or, of course, do things like take extra classes and save people's lives. That too.

6. When She Used Magic Instead Of Braces To Shrink Her Teeth

As someone who went through the "brace face" phase, I was SO jealous of Hermione when she tricked Madam Pomfrey into magically shrinking her front teeth. I had buck teeth, too, but instead of getting them fixed with a simple spell, I had to suffer through years of metal wires in my mouth. Definitely would've loved to be Hermione Granger in this case.

7. When She Was The Belle Of The Yule Ball

Hermione's Yule Ball transformation is such a great scene, and definitely qualifies as an I-would-love-to-be-her moment. She has great dress robes, a great date, and is the total toast of the night. Not similarly, at my junior prom I spilled pasta on my dress before I even got to the dance. Hermione's confidence and poise would have been welcome in this case...

Harry may have taught the lessons, but Hermione was the real brains behind Dumbledore's Army. She created the enchanted coins that told members when to meet, made sure traitors to the organization would be punished, and kept the whole thing going. I'd definitely want to be that stellar.

9. When She Had The Best Purse Ever

Admit it: you've thought about this bag a lot. Hermione has it in the Deathly Hallows, and though it looks small on the outside, it fits an entire library inside. Sign. Me. Up.

10. When Harry Never Could Have Defeated Voldemort Without Her

Harry may be the titular character in the series, but we all know that he never could have done it without the loyal, intelligent, brave, and all-around fierce Hermione Granger. You'd be honored to be her... or to even be her BFF... and in a way, you are, because she lives in the pages of the series. And who says books can't be your best friends? Hermione would definitely approve.