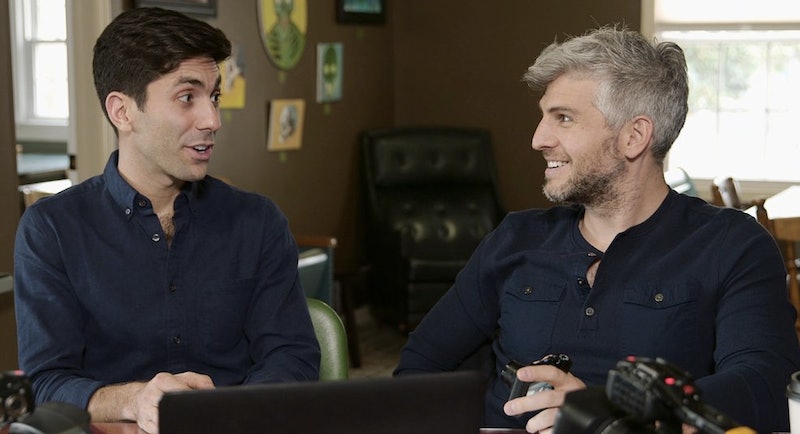 Over the past five seasons of Catfish, most of the people who are seeking Max and Nev's help in their romantic lives, but in this week's episode, they're tackling something totally different — something so crazy that it required 90 minutes of MTV screen time to tell the tale. This week, Catfish introduces us to Kayla and Courtney, and they have a really shocking connection. Courtney contacted Kayla, insisting that she's been communicating with her father... but the only problem is that Kayla's father has been dead for 14 years. Yeah, I'd say this is a little more serious than a case of not Skyping it out first.

According to Catfish, Kayla's father died after serving prison time, so it's been a long time since she's been in actual contact with her dad, but Courtney's trying to change all that. She says she's a medium, and she knows a scary amount of details about Kayla's father, so either she's for real or she's someone close to Kayla's family who's playing a really nasty trick on her. Fortunately, Nev and Max are ready to get to the bottom of this, and Kayla's aunt, Shannon (who's not convinced Courtney's legit) is along for the ride, too.

So how do you figure out if someone's really a medium or not? You hit google to find out if the personal info she knows is available online, of course. They end up finding her Facebook photos, and it seems like her page is legit, so they message one of her friends. Finally, they get a call from someone named Erica, and she confirms that not only does she think Courtney's gift is real, but she's also felt the presence of Kayla's dad in her home. What?!

Finally, Courtney agrees to meet up with them in person to get to the bottom of this. Here's the game plan: Nev wants to take just Kayla to meet up with Courtney, and if that goes well, Shannon can go, too. So they go to a classic Catfish meet up spot (a local park) and they finally come face to face. Courtney seems super thrilled to see Kayla, and immediately tells her she has her father's eyes. Wait, is this really cool or kind of creepy?

Courtney seems totally convinced that she's here to bring Kayla peace, and that she didn't meet up with her any sooner because she didn't want to ruin what could be such a special connection. She explains everything, from the first time she was visited by Kayla's dad to how she's felt compelled to help her. At first, she was skeptical and even worried she was schizophrenic, but doctors confirmed that she isn't mentally ill. The only conclusion she can draw is that she's legitimately communicating with Kayla's father, and that she's supposed to deliver his messages to her.

Nev and Max are convinced that she's not lying, but Kayla's not so sure. She wants Courtney to tell her one of her family's dark secrets that no one else would know before she lets herself believe that Courtney's telling the truth. And boy, do the secrets come out. At that point, after Courtney reveals extremely personal details about Kayla's parents, Kayla decides to take a break for the day and pick it back up later.

They meet up again the next day with Courtney and Shannon, and yet again, Courtney comes through with intense, super secret details about her dad that nobody else would know. And oh, by the way: Dad is here, in this room, he just doesn't want to chat. Eventually, though, Shannon and Kayla are able to talk to him and get a response.

It's completely baffling, but it's hard not to believe Courtney's being honest. And what matters most is that Kayla was able to find the peace with her father's death that she needs, and it seems like she's gotten so much closure. It's really true: Literally anything can happen on Catfish.